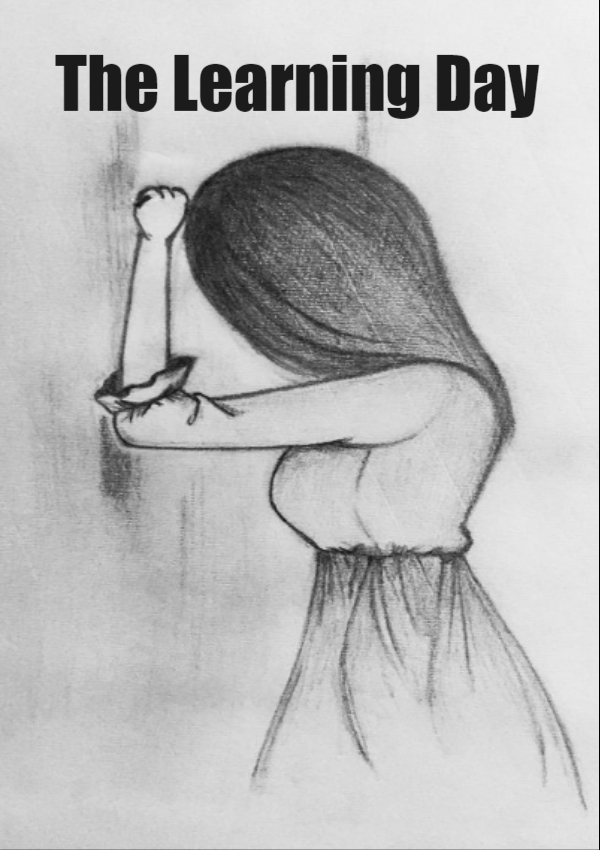 Everybody stood up from their seats.

'Good Morning Maaadaammm!' echoed through the classroom in a well-rehearsed tone.

Priya raised her left hand in the air and dropped it down swiftly. The students took their seats. She didn't say a word and went straight to her desk, pulled off a leather sling bag from her shoulder and dropped the books down on the desk with a loud thud.

She was in a rough mood today. Missed the bus, fighting with the cab driver, forgot her lunch, and Principal insulted the first thing she entered the office. "Things can't get any worse than that," She thought to herself.

'Miss Priya is HOT today!' Aman whispered to Siddhu. They were seated in the fourth row from the front.

'Ssshhhh! Shut up Aman,' Siddhu replied in an equally low voice, 'you will put us both in danger of her anger.'

And that he did.

A fine piece of white chalk hit Siddhu's forehead hard like a bullet. 'Aaaaeeeeiiiiiiiiii,' he shrieked.

Another piece of chalk came cutting through space. It almost touched Aman's left ear lobe making it vibrate, and went straight past him to the back row, hit Shweta's nose and bounced back a little only to fell down in her lap.

The next instant, Shweta got up from her seat and glared at Miss Priya. The piece of chalk fell down to the ground. Her eyes were popping out of sockets. She drew a hand in her skirt pocket, took out a grey piece of cloth, raised it high in the air and jerked, and then brought it close to her face to clean that thick white dot on her nose.

"WHAT I DID, MISS?" She banged both her hands on her desk and demanded from Miss Priya.

"Wheeeet- eeeee -deeed -Meeech!!!" someone mimicked her from her back row. She knew exactly who it was.

'Mind your own business, You Bloody Nosy Ritu!!!' snapped Shweta while turning back to face her, 'Everybody knows such a cheap girl you are.'

'How dare you talk to me like that, you bloody bitch??' Ritu shot up from her seat. Both were now face to face and ready to fight.

The entire class turned to watch the show.

Manish, who was seated in the front row, was noticing Miss Priya curiously. Her eyes were bleeding red, and she was boiling in wrath. 'Something isn't right with her,' he thought.

Priya shrugged. She was breathing heavily, and her breaths were louder and hotter. Her hands were clutched tightly around the wooden duster.

A loud bang, a thud, and everything went dead, pin-drop silence.

Priya had thrown that duster at the board with speed of light to vent out her frustration.

Everybody settled down to their respective positions.

After a brief moment's pause there came slow moaning sounds of someone crying like a cat meowing. Priya tried to locate the source of those painful sounds of sniffing and hiccups.

'MISS! MISSS! MISSSS!' She turned to look at Manish who was pale with fear.

'What happened Maniii…..' before she could complete the sentence, her eyes fell on the boy sitting next to him- Ravi. Ravi was clutching his forehead with both his hands. Through the gap between his fingers, red blood was dripping, staining his hands, his face and his dress and even the duster lying on a desk. Eyes and nose were flowing and was trembling in pain and crying.

Priya was in dead shock for a moment. She didn't move. 'Oh, Jeeez! What have I done?' she muttered under her breath. And before she could control, her own eyes were wet.

'MISSSS!!' shouted Manish to wake her up from reverie. 'MISS PRIYAA! We need to take him to the medical room, RIGHT NOWW!'

'Oh Yes yes yes! I am so sorry… I am really sorry Ravi…' Priya staggered on her legs. Together she and Manish held him from both his arms and went straight out of the class towards the medical room.

Priya felt hopeless for herself. One part of her mind was feeling pity for the poor boy Ravi who fell victim to her anger, while the other part was flooding with the horror of what may happen next; parental complaints, official and even judicial inquiry, loss of respect, demand of resignation and so on.

'Oh dear,' Priya thought to herself, 'I shouldn't have let my anger get better of me.'

She remembered one of her earlier thoughts of day and muttered-

'Things can always get even worse if one fails to control their anger.'