Stocking up on ration enough for three months had seemed like a wise idea at that time but now she found herself reconsidering. She had managed to stretch it for an extra month with the result that she hadn't stepped outside her house in more than four months. The slight anxiety she felt at the prospect of going out again now was not a good sign. The idea of becoming a hermit had never had much appeal for her and that is exactly what she had become. What worried her was how easy it was to forget that there was a world outside. The essentials were all delivered, the paychecks could be accessed from her phone, the work was all digital. The absence of human company rankled though. Personifying objects around the house to feel less lonely had brought her awfully close to being a loony.

'What could possibly go wrong, yeah?' She addressed her tomato plant as she stepped outside. 'I'll get to see some actual people besides my own hands. Maybe they'll finally have Snickers back in stock.' She stared. The plant was unmoved. 'Should have gotten a cat.' She muttered as she set out.

This was probably as close as she was going to get to being a character in a post-apocalyptic dystopia. Maybe she should write logs for the people in the future:

'The dogs have claimed the streets. Their gang wars are the only action visible, rather, heard, aside from the rare car, which two dogs dutifully chase till the end of their territory. Things look cleaner with fewer people there to mess them up. It is so quiet.'

Nah, she should stick to writing fiction. Her face already sweating behind the mask, she paused to say hello to the frangipani tree at the intersection, making a mental note to pick up some flowers on the way back.

The shop owners had cordoned off a small area in front of the shop to discourage people from crowding at the counter. When she reached, there were three people already inside the rope enclosure, so she waited outside, noting that she recognised one of these people. Rita, a young woman who worked full-time in the house adjacent to hers. Rita looked like she was an adolescent, but was actually in her twenties. They had talked only a couple of days ago. Rita had come upon her terrace to water the plants while she was walking on hers. She had said hi and casually asked Rita how she was doing. They had never talked to each other directly before this. What followed had stunned her. Rita had told her that her employers didn't know this, but she was married. Her husband had turned out to be an abusive cheater, already married to someone else at the time he married her. She had left him and come to Delhi, but her mother-in-law and husband hadn't let her take her little daughter along. The latter shortly died in their custody, likely from a beating. Now, her so-called husband had reached the city, threatening to harm Rita's parents if she didn't get back with him. The family Rita worked for had no knowledge of any of this.

After requesting Rita to not go back to him no matter what, and re-emphasising this with as much sternness as she could put in without being overbearing, she had given her the number for the Women's Commission helpline. She wondered where that loser husband was at the moment. Would it be too much to wish for an alien abduction? Her reverie was broken by a middle-aged man cutting in front of her to join the three people already inside the rope boundary. She got annoyed, and yet acknowledged to herself that it didn't make a difference. The time outside would probably be good for her after months of self-imposed captivity. Still, her eyes bore daggers into his neck, willing him to feel shame for being so rude. Her turn finally came after another seven minutes and she surprised herself by making conversation with the shop owner's son. And they had Snickers. See? This wasn't so bad.

All the plumeria flowers underneath the tree had been trampled under cars, but she still walked home feeling better. This was a small achievement, and it should alleviate her mother's concern for a while.

Something was wrong, she thought, as soon as she entered the house. There were two pairs of shoes on the threshold. Shiny lime green shoes. She had a passing thought that her two trespassers were polite even as she rushed inside in a panic. There were two men--two identical-looking men, down to their perceivable lack of noses. How did they breathe? They wore glitzy purple jackets, their hair braided around their head. Before she could decide whether she wanted to scream or run away, one of them spoke. It was like she heard him through a fog--'Madam, you need to come with us. We need a Rock God to stop Pluto from going out of orbit. She instantly got worried. Did she have an electric guitar? Then she felt herself spiralling out, the noseless man still calling out to her, his voice fading. She got launched through space and woke up with a start--and found herself gazing at--was it her tomato plant sitting up in bed next to her, stroking her face? 'Thank God', she exclaimed and fell back to sleep. 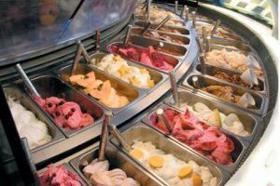