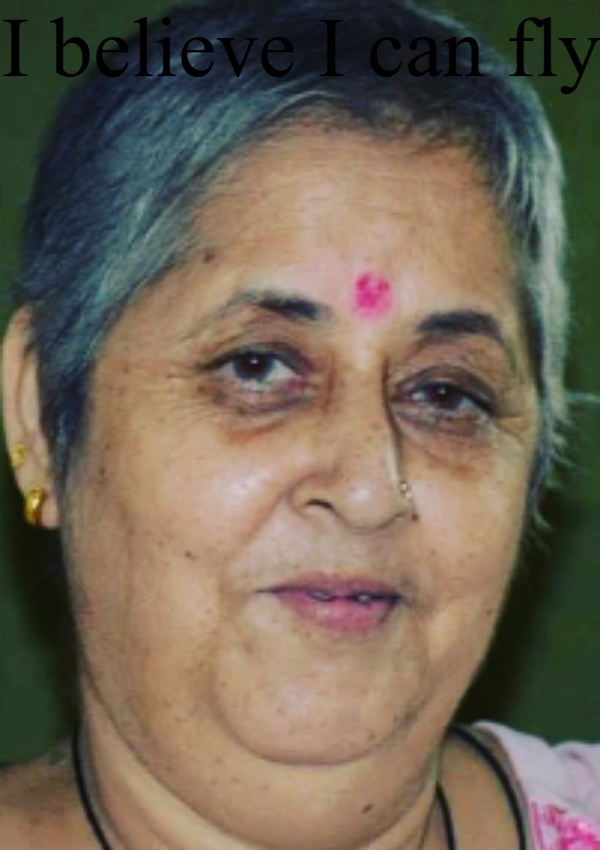 I Believe I Can Fly

I Believe I Can Fly

How do we react to our problems? This is a question we seldom ask ourselves. We, because of nervousness and anxiety of facing a hostile situation, increase the magnitude of the problem mentally and decrease our capacity to diffuse it. Man is a social animal and needs approval and sympathy from others to move on. Whenever we talk of our issues and problems, we subconsciously increase the trauma while speaking of it. We all do it, I am giving benefit of the doubt to a lot of us by saying subconsciously.

I have seen people exaggerate for sympathy and seek help when they don’t need it. Very few people have the courage to look in the eye of the problem and say to themselves “I have the courage and I can survive this”. Do not judge my point and say it is preaching, as what I am saying has a deeper meaning than visible. I am talking about the very first phase of preparing, the phase where you condition your mind to be ready to go through the pain.

I remember 4 years ago when my mother was diagnosed of Ovarian cancer, like all of my family, I was broken too. 3rd stage, said the doctor, out of 4 stages. Have you ever fathomed the weight of this word “cancer”? It crushes the morale of the very best. The initial feeling was a strange mix of disbelief and fear. I don’t know how many times I must have read her biopsy report, which was written in unfamiliar medical terms and language, and tried to desperately find something in it which pointed to the fact that she does not have cancer. The biopsy report had the word Metastasis all over it. I quickly searched the internet and was shattered to find out it means “spread of a cancer disease from one organ or part to another not directly connected with it”.

Unfortunately, there was no doubt that she had the disease. I cried, alone, for a long time. Tried to face my mother with a poker face but could not. There was a lot of fear looming in the air. My wife used to sit in the night and talk to me for a long time. I had this ever growing fear of losing my mother to this disease. I knew I had to be strong, but it is easier said than done. Do you know the hardest question I have ever been asked? “Why me Vikram, why me?” my mother asked. You know the hardest thing for me at that time was that to conceal my emotions and be that responsible elder son of this family. My parents, specially my Father, needed me the most.

We had been to the Tata Memorial Hospital once and the sheer sight of the place can be devastating to the most of us. The OPD section was filled with people, I think it was holding an attendance more than 3 times its actual capacity. There were patients all around us, I still remember the look on my mother’s face. Terrified and fearful she was dropping tears silently. Painful it was, I don’t know when I saw it and kept my hand on her shoulder. We saw the doctor, after about 4 hours of wait.

I cannot describe those ten minutes in the doctor’s chamber, I was making assumptions and judging her body language. My fear was growing, she was examining her and asking questions. My Father and I were looking at each other and trying to communicate with our eyes. He had fear and helplessness both coupled together. I again used my eyes to tell him don’t worry. These reactions of mine were spontaneous and till date I don’t know where did I get the strength from. The doctor confirmed it was a critical case but she will do her best, she said. If some of you, and I hope you never, have been to the Tata Memorial hospital, you will know that the doctors there talk very less. It because there are thousands waiting outside to be treated. I was clear that I wanted to ask the doctor few questions, hard ones, but not in front of my parents. Luckily I got the chance. “I am her elder son and would like to know the true facts," I told her. “Please be honest to me as I need to be aware. What are her chances of survival?” I asked. In the meantime my father sensing that I was asking something critical came there and asked the doctor “How much time she has?” Then came the most awakening answer in my life, “Why are you all talking like this, let us give it a try, she can be treated. Please don’t lose hope.” The answer changed the way I was looking at this issue. Her words made me realize my mistake of giving up hope and giving up on God. The fact that I was making this problem bigger by looking at the consequence and not a solution.

I came back home and spoke to my wife, I told her that we have to be ready for a long journey. The doctor had advised that my mother would go through 6 cycles of chemotherapy with a surgery after the first 3 cycles. I was now looking beyond the word Cancer. There was a sense of purpose, and I was trying to conditioned my mind to stop being sad and get on with her treatment. I used to present myself as the most optimistic person in front of my family and friends. “She has no option but to get well” is what I used to tell them. It would not be true if I say that it was simple for me, considering the fact that, I was doing something which I had never done before. There was so much to do and so much to bear.

Our visits to the hospital became frequent, leave aside the chemo drugs, the experience of going to the hospital was itself a very difficult. My mother was still fighting her own battle. A patient of cancer is constantly watching the hour glass in everything he or she does. Every moment the ticking clock blocks your vision. The disease creates a vacuum between the patient and the outer world making it hard for them to communicate. I have seen her constantly looking out of the window and thinking something. But I was resolute, now somewhat fully conditioned to do anything to ensure she fights it out.

One of the most important factor to fight cancer is the mental health of the patient. Who they meet? What they are being talked? What is the general feeling of people around them makes a lot of difference. We used to ensure that anyone who comes to meet her should talk as less as possible about the disease and try to be normal. My relatives in Mumbai were very helpful and cognizant of this fact. Her 1st cycle of chemo started, it was a painful experience for her. We were all very sad watching helplessly let her go through this. Her family, her sons, and above all her husband, watched her go through this trauma. Nothing we could do.

Two more chemo cycles passed, the doctors said she was responding to the drug. We were praying to god, to give her strength and purpose to us. The doctors were now ready to perform surgery and remove the tumor. It was a big moment, we were scared. But the operation was successful.

By now, I was confident enough that she would be able to pass this phase. Patients generally feel, that because of them their loved ones are going through a lot of pain and hence suicidal tendencies grow. I used to sit with her and tell her that we all are making a lot of effort and she should not disappoint us by expressing a will to finish this.

After the surgery, she went through another three cycles of chemotherapy. It was tough. But finally came the day when her cancer marker count was in the normal levels. We had won the battle, we were happy to bring her normal life back. She was happy and relieved. We were blessed again.

The power of belief that I had developed helped me to take charge and not let the problem take over. Let us take a while and think, how many times small issues deter us? How many times we make problems big? How many times we take the refuge of sympathy to run away from issues? The key, my friends, is the conditioned mind. It’s all in the mind. If you condition your mind and make it believe that you will wither the storm, then you would. A calm mind channelizes energy and actions in the right direction. If my family had not conditioned their minds and made the issue big, we would have not won the battle against cancer.

As I said we won the battle against cancer, but the war is still on. My mother had a relapse of cancer and she is fighting it out today as well. She is stronger, she is resolute and she has conditioned her mind to believe that “she has the courage and she will fight it out.”