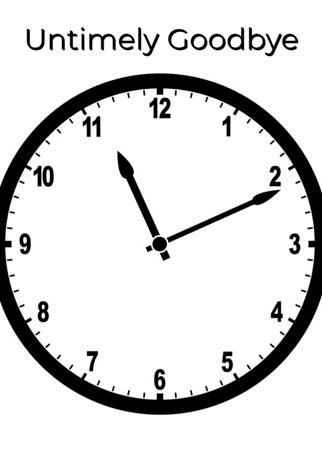 Wishing on shooting stars fails you

It's like making a wish every time the clock strikes 11:11

And spending a lifetime for it to come true.

You find yourself reading about reincarnations

Anything to fix your broken beyond heart

Because you weren't supposed to part

You can't explain why certain songs break your heart

You wish upon the moon following your car.

That's all I ask"

There's no coming back from where he went

Because he wasn't Jesus

Just an ordinary guy who took his own life

Leaving so many to mourn

And even though I've grown a lot since he left

It's raining on the inside.

He doesn't even cross my mind

And the most random things take me back

To the bottom of the staircase

Leading up to the memorial

My hands begin to shake

As evidently as his mother's cries that day.

I want to tell him not to leave

If for nothing else,

Where that was all she could do

And for the grandfather who stood in front of a crowd

Thanking everyone who came

And for the brother who had to stay strong.

For the friends who didn't believe it was goodbye

Who kept hoping for a miracle

Who started praying in the God they didn't believe

Just for one last glance

For a way to properly say goodbye.