The girl was extremely bored as she flipped through the magazines in the waiting lounge of the Taj Mahal Palace Hotel. The hotel seemed to be bustling with people, despite it being a Wednesday in the month of November. Just as she looked up at the latest edition of The Vogue Magazine, which failed to hold her interest, she saw a young boy, perhaps around her own age, enter the waiting lounge with earphone popped into his ears. There was no denying that the boy seemed smart. He was wearing a plain gray jacket, a dark blue casual shirt underneath with some washed-off blue jeans and was looking at the phone in his hand. Unlike most people in the five-star hotels who seemed to be dressed formally and with the best of brands, the boy seemed almost real-something normal. She still couldn't understand why people here would start dressing up for winters. She did understand that it was almost the end of November and winter was approaching, but to the girl, it felt nothing like winter.

As the girl was lost in her thoughts, the boy came and settled on the couch right behind hers, such that their heads were right next to each other but facing different directions. During all the movement, one of the ear buds had come loose. As the girl heard the faint beat playing 'All You Need Is Love' by The Beatles, she smiled lightly and started to sing along with the tune.

The boy in the blue shirt heard the familiar lyrics of the song playing from his iPod. Strangely though, it was the unfamiliar voice that drew his attention. The boy turned to look for the source and came to see the head of a pretty girl. It was the same girl, he noticed, whom he had seen when he had entered the waiting lounge. She had seemed pretty. She seemed alone and he had thought of talking to her but the Vogue Magazine she had been reading had killed off the chance of any interest that he might have had in her. Now as he saw her singing to herself, he couldn't resist saying something. It wasn't that she had an angelic voice or seemed like an angel from heaven, instead she seemed normal, unlike all the people there.

"Not bad. You have good taste in music, Miss," he said. The girl looked up startled and blinked and then pushed her framed glasses up her nose. She had not been aware that she had been singing out loud.

"You don't have a bad taste in music yourself," she said.

"Well I'd let the Beatles know about you in case they are hiring," he said.

"So glad that I already have a fan," she said while crossing her arms.

"Oh you bet, Fashionista," he said and she furrowed her eyebrows at the comment. He motioned towards the magazine that now lay on the table in front of her. Her eyes widened a little at the realization and then she rolled her eyes. "Well, I am definitely NOT a fan of that. Man, do all the people in the posh hotels read these kinds of books? Why couldn't they have  ..." he cut her off with ‘Harry Potter’ with a small grin on his face. She smiled and said, "Or maybe something by Hemmingway,
but J. K. Rowling would do too. We can always use a little magic and who knows? Maybe, we'll get an escape from this world." The boy stood up and looked at his watch. The girl thought that maybe it was time for him to leave. The boy moved, only to go around the couch to sit next to her. “I thought you were leaving," the girl said, "It's not the time to leave yet. So, Miss, you like the classics, have a good taste in music and are dressed casually. What are you doing here?" The girl told him that she was waiting for her father who was here for an important business meeting and the boy said that he had just come back from watching Dostana—a recent release—with his friend, a comment that earned him a smirk from the girl, and he too was waiting for his father, whom he had to drive back home. The girl stared at the boy's jacket and when she couldn't hold it in anymore, she said: "Aren't you hot?” As the realization hit her, her eyes widened and she said, “I mean, it is winter, but it's not cold yet." The boy gave a little laugh and said, “You’re not from around here, are you? This is about as cold as it gets." What they didn't know was that an eternal cold would soon lay over them.

"No, I am from Delhi," the girl told him. The boy said "Oh! No wonder you don't consider it cold here."
"I guess. So what about you? Always been a Mumbaikar?" The boy nodded and the conversation flowed effortlessly. The two young people were more comfortable with each other-strangers-than they had ever been with people whom they had known throughout their lives.

"You say that as if you have so many problems to face," the boy said laughing at the frustrated face the girl had made while talking about being confused with what to do after completing this final year of school. The boy, though only 2 years older and had gone through the same confusion and anxiety not long ago, found it very hilarious now.

"I've got ninety-nine problems and being a decaying organism that's born to die in a society run by money, that I can't escape is one of them."

"Wow. That was deep," the boy said. “But everything is a tragedy if you see it that way. Just think about it, right now, exactly in this moment, all the fishes are drowning. The sea out there," he said pointing towards the vast sea behind the Gateway of India visible through one of the windows in front of them, "—is currently flooding, if you think about it."

"Now, THAT'S deep." The girl said and both of them cracked up at the pun.

It was going to take some more time for the girl's dad in the meeting, according to the text he had sent her, and the boy offered to give her a little tour around the Gateway of India to which the girl readily agreed.

As they walked across the hall and waited for the elevator they laughed at how they hadn't even exchanged names yet, and it felt like they had known each other for so long. Not a single person who saw them right then, right there would have believed that they had been strangers just a few hours ago. But who knew that none of those bystanders of the beginning of this beautiful story that held a promise to be something much more would ever get to tell the world about it.

"28/11,” the boy said and the girl looked at him funny and said. "What's that?”
The boy smiled and said, "Just a bunch of numbers. It's special because it's the date we first met .I'll remember it as long as I live." Just then the elevator binged, signaling its arrival. Both of them smiled at each other as they climbed onto the elevator. Who knew they wouldn't be just a ‘bunch of numbers’, but something that no person would ever be able to forget as long as they live.

"My Daadu would never believe me when I tell him that I actually met a boy who's into both Hemmingway and Rabindranath Tagore!" Who knew that it wasn't the only thing that her grandfather would have a hard time believing and accepting? Just as the elevator was about to close, to take them out of the building towards very promising futures...it never closed. Instead, life's doors closed on them. There was a loud explosion, the echo of which will always reverberate in the ears of people, and then silence.

Who knew two strangers could be such great friends? Who knew a coincidence could give birth to such a beautiful bond? Who could have predicted that sparks would fly? And that their friendship would be so short-lived... It wasn’t supposed to be the end of their story, or of so many around them. But that is the thing with tragedy, it doesn’t see who will be affected, their future, who will live to tell the tale. It doesn’t choose, doesn’t discriminate, it only strikes and affects. 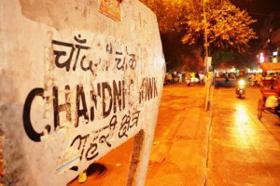