I looked around desperately trying to make sense of the puzzle. I tried to wipe off the sweat off of my forehead with the back of my left hand, my right hand in Azad’s tight grip with which he was dragging me along no doubt trying to make sure I didn’t get lost. The summer sun was shining above us making mirage when I turned my head to look towards the Red Fort that was getting farther away from us with each step that Azad dragged me along. The bustling crowds did no help with the famous Delhi’s summer which seemed escalated here. He was well aware of my condition which I assume was pretty much like his own .He stopped in front of an old looking shop and said something to the shopkeeper that I didn’t quite catch up on with all the noise around us. Kaake Di Hatti read the banner of the shop and just as I looked down, Azad was handing me a Kulad and I knew all too well what it held .I greedily gobbled down the famous butter Lassi with the flavor of rose .The  chilled Lassi giving immense pleasure as I devoured its taste pressing the semi-wet , cool earthen glass  to my forehead trying to beat the heat .No wonder people in older times used these glasses, it wasn’t just the coolness factor but the smell of wet earth from the glass seemed refreshing. “Any idea about what it might mean?” I shook my head feeling disappointed at not being able to decipher the puzzle .I could see the disappointment mirror in his expressions and I didn’t want my friend to feel like that, we still had time, it wasn’t completely hopeless, not yet. “I am hungry. Won’t you show me around your home territory? We’ll see what we can do about it, but you’re not going to spoil my adventure, are you?” He smiled and shook his head and said, “Come on," turned and started marching in the direction we had been going in before making this stop. As we continued, I could hear loud sounds and a lot of people bustling about a building, green flags, small and big put up there. I wanted to go in and see the holy place myself, witness its beauty but we were a little short of time. As we continued we made many turns and fared through many different streets, some so narrow that only one person could pass at once. Suddenly very interesting smells hit my nose and my stomach growled of hunger. We settled into a shop and after having placed orders for the both of us, Azad spread his hands, grinning and said, “This is the famous Paranthe wali gali.” No wonder the menu card only had varieties and varieties of Paranthas, but I was too hungry to care .I said “I just don’t get it! How do you even navigate through this place? It’s all so confusing! All the streets are interconnected and the traffic! Oh God. Remind me to never bring a car here. How do you even manage?” I said exasperated, throwing my hands around to put some emphasis into my point. He laughed and said, “It’s not so difficult. You get used to it if you go through the streets everyday..”  “So, where was your home?” He had lived here until two years back when his family had moved to Vikas Puri but strangely for someone from our generation, he took a lot of pride in being born and brought up here.”Just a right from the Ghantaghar. “ I interrupted him with “WOAH! There was a clock tower? How come I didn’t see it coming here?” He said, “There used to be, they removed it but we still refer to it as the Ghantaghar.”  Just then our food arrived and I scrunched up my nose when he told me he had ordered a rabadi wala parantha for himself. The idea of that seemed kind of gross, how could they put a sweet in a parantha. He said, “Don’t reject before you have even tried it.” And after much of complaining and protesting when I actually had a bite of it and honestly, as strange as the combination of sweet and salty had seemed, I had loved it. And right then I had had my Eureka moment. “I GET IT! I GET IT NOW!” At first, he had looked confused but as he understood, he eyes had gone wide and he had urged me to explain. Two hours ago, we had been sitting in the metro when he had shown me a diary of his grandfather that he had found among some of the old things, apart from various entries and records, there had been on one page, written a few words:

On the days before Eid, being at this beautiful, mystical, and mesmerizing place has been an opportunity that the world often ignores or perhaps fails to see

Here with Half the moon that is lost now

The place comes to life with the moon

I hold my breath as I witness the scene, the place seeming beautifully serene...

Being the smart people that we are, we had started discussing what place it could be, him adding that it would be somewhere in the city because his Grandfather had only been outside the city a few times .And while discussing we had gotten a little too loud and had been chucked out of the metro because we were too excited to hold it in. The station we had been chucked out at had been had very conveniently been the infamous Chandni Chowk. Two days before Eid. No wonder Jama Mazjid had been bustling with people.

“This is it. This is what your grandfather had been talking about Chandni Chowk! I bet my entire life savings on it,” I said.

He looked confused so I decided to enlighten him. I cleared my throat and said, “Chandni Chowk, the initial market had been in shape of half a moon, the half-moon that is lost now. It used to be a place for rich people plus Chandni does come from chandi-silver. It’s definitely lively, it has history-Red Fort and everything, and mystery- well the way around this place will be a mystery to me. Just think, all of it makes sense.” His eyes slowly widened as it dawned on him.

“But what is it about night and days before Eid?” I enquired and he shook his head saying he had no idea about it.

“Well, Eid is coming in two days. We’ll see what it is about tonight.” He said and I nodded. To kill the time, we walked around the market, me for the first time in my life. The Kinari Bazar, the Nai chowk, and the infamous Chor Bazaar, where might I say I was very tempted to buy an iPhone 6 for just 100 bucks. I had been to different malls in Delhi and various different markets, Cannaught Place and what not but I realized that this place with its wholesale markets, food, choked up streets and all had its very own charm. The havelis alongside the streets, the way people interacted with each other as if everyone were a part of a big family.

That night, I was indeed taken by surprise and it had been one of the best nights of my life. His grandfather had been very right in describing how the city came to life as the sun went down. The streets were decorated with glitter and fairy lights, there were hustle and bustle all around and people moving about, shopping and chattering, under the night sky filled with stars. The mood of festivities in the air .Everyone joyful and celebrating. In that moment, there was no Hindu, no Muslim, no rich and no poor. I learned that it was the special night market that used to be functional only for a few days before Eid. There were many special dishes being served around. Despite all the noise and the crowd, it truly gave me a sense of serenity and joy. That night I discovered what they truly meant when they called it the city that never slept. In that moment it was clear how the city was full of mysteries and never once failed to surprise one. It was Shahanjahan’s Capital, it was India’s capital, and it was Delhi. It was a beauty and a puzzle that never ceased to amaze you and just when you thought that you know all about it, it is ready with a mischievous smile, to sneak up on you and whisper in your ear ‘Surprise!’ 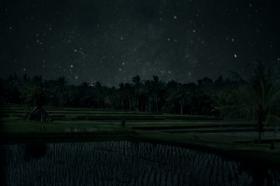