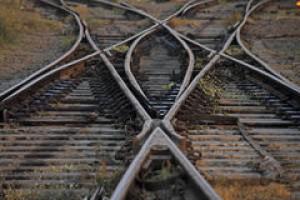 It was a cool December evening. She looked up at the sound of the train’s horn, chugging in the distance, signaling its arrival. The KN Express pulled up to her platform, the sun’s rays reflecting off its still wet surface from the rains that had just passed a little while ago. She gave way to the alighting crowd before she hoisted herself up the stairs to her compartment. Pulling her little bag on wheels behind her, she found the train almost deserted. The train had just reached a major destination and had only a few more stops to the remote towns on the outskirts of the city to complete its journey. She was traveling to one of those towns she called home.

She walked along the aisle of her compartment. Finding a seat was not a hard thing to do in the almost empty train, but she kept searching for something. Her eyes fell upon a man. Almost her age, wearing a blue sweater and khakis, sitting near the window, he was reading a book. Like the metaphorical moth, she was attracted to this flame. She instinctively made a move to the seat opposite to him.

She heaved her bag off the ground breathing a sigh of effort. With a little push and by standing on her toes, she would have been able to place her bag in the luggage compartment, but she didn’t have to that day. Strong arms came from behind her and swiftly lifted her bag from her hands and placed them on its place above. The scent of cologne hit her nose as she turned around to find a pair of deep brown eyes looking at her with a sense of amusement. With perfectly chiseled features and a smile lighting them up, she had to fight her gaze off them.

“Thank you!” she said trying to sound composed while her heart raced a marathon.

“You’re welcome!” said the man in the blue sweater as he stepped back from her and went back to his seat.

She sat on her seat too, flashing a smile at his now observant eyes.

“Anamika”, she said extending a hand.

“Amudhan”, he replied shaking hers.

He hesitated for a few seconds before starting again, “Anamika is also a lovely name. You wouldn’t believe it, but co-incidentally that is the name of the main character in this book I’m reading,” he finished.

She took a look at the book in his hand. It had the title ‘Wayward Dreams’ on the cover.

“Isn’t that a little cheesy?”

“I agree!”, he chuckled. “It is a little guilty pleasure of mine. I always do keep wondering if….”

As the train gently picked up speed, the air whizzed in from the window and blew the book open. It read the words as the pages turned in a godly speed. Amudhan stopped the turning pages by laying a hand over it. He looked down, passively read a few words and looked up at her with determination.

“I never expected to see you here.” he finally said, “How are you?”

“I didn’t fancy seeing you here either. But it is good to see you again.”

“You didn’t answer my question.”

“You already did”, he said looking at her eyes which were glistening in the moonlight that seeped in through the windows of the train.

“-missed you”, she said not waiting for him to finish his sentence.

They smiled at each other.

“I see you named your main character after me.”, she said holding her hand for the book.

Handing her the book he replied, “And I see you still like playing your little charades. What was with all that introducing yourself to me?”

“Well, I figured you deserved a second chance at first impression,” she laughed. “The first time I saw you, you were with your gang of hooligans on this very train, raising hell for the other students commuting to our college.”

“Says the girl who ran away from me when I asked what the time was.”

Their laughs filled the empty compartment.

“Amudhan, the book is wonderful. I was captivated from the very first line,” she said.

“You haven’t read it yet”, he said pointing to the book in her hand.

“Thanks would suffice! A writer who is at a loss of words. How intriguing?!”, she mocked.

“Thank you, for writing it. It was beautiful. I couldn’t help but think of the time when the two characters meet each other again -”

The ring from Amudhan’s phone stopped Anamika mid-sentence. She looked at him taking his phone out of his pocket.

“Shiva”, she finished with it being the only words she could muster out of her shocked self.

Nodding he motioned towards the phone in his hand. “I have to take this call,” he said and walked away a little to talk on his phone.

Anamika looked at him standing near the doorway of the train talking on his phone, then looked out the window to the landscape speeding by.

A few minutes later Amudhan returned to his seat.

“God no! Shiva and I’ve decided to wait a year.”

“Are you visiting her now?”

“I make a trip to our town every month to visit my parents. I didn’t think I’d meet you here. What brings you to our old town?”

“Oh! Just making a trip to sell off our family’s old home. No one lives there anymore and I see no point holding on to it.”

“I’m sure you will have plenty of memories there. I too have some attachment to that house of yours,” he said looking out the window.

“That is all they are now, aren’t they? Mere memories.”

He turned his head towards her only to see her looking away from him as she said those words. A tear glistened at the corner of her eyes. He understood.

Not knowing how to move past the malady, they spent the rest of the journey with little conversation. Contact information was exchanged and so were empty promises to meet each other sometimes. As the train reached the lazy town, Amudhan helped Anamika get her bag down and walked her outside the station.

“May I ask you something?” Anamika asked.

“I would like an autographed copy of your book. If it isn’t too much tro-”

“I’ll be happy to”, he said and took a pen from his pocket and signed the book he had in his hand.

She smiled seeing her name in the book and with a sigh, said “So then take care! Convey my regards to Sowmiya.”

“Sure! You take care too” he said.

“She didn’t know… or did she?”, he thought to himself.

The loud horn broke their reverie and they smiled at each other one last time before departing their separate ways as the train wound on a path of its own.