They walked on the lonely street hand in hand, silently staring at the pastel orange leaves that were falling to the ground, leaving the trees bare. Fall was finally here with a slight sting in the air it had covered the streets and the parks in its golden hues.

It had been a perfect day. It started out with breakfast in bed which led to watching a superhero movie snuggled up on the couch, and finally to their favourite dog café. The day had come to an end when they were walking back home through a park glowing with the golden glint of the setting sun, reflected by the orangish red leaves in the pink sky, bundled up in their warm clothes as they enjoyed each other's company in silence. When suddenly, Jasper had bent down on one knee in the middle of the park, produced a rather large diamond ring from his pocket and asked Charlotte to marry him.

It had been an eventful day. One that was marked by the love they shared since the moment they had set eyes on each other five years ago.

They had managed to reach their humble abode, a rather cosy one-bedroom apartment —post a rather emotional proposal followed by their signature street dinner. Jasper had tucked himself into bed and grabbed the book he was reading with his reading glasses perched on his nose, the faint light from the bedside lamp making his face glow.

Charlotte on the other hand stood in the doorway of their bedroom, gazing at the love of her life with compassion sparkling in her eyes. Dressed in her favourite, most comfortable PJ's, Charlotte walked towards Jasper’s side of the bed, grabbed his book from his hand and set it down on the bedside table. She gingerly climbed onto his lap and snuggled herself into his arms, burying her head in his warm chest. She felt Jasper's heart beat at a steady rate, felt his hands as they rubbed soothing circles into her back. She would remember this day for as long as time would permit.

She was content with this. This is all she had asked for and she could proudly say she had it all. Jasper lightly kissed the top of her head and started to hum his favourite melody. His honey laced voice tugged at her heartstrings as she fell deeper and deeper into the land of dreams, surrendering herself to a night in the warmth of his arms. Jasper looked down at her petite figure and a small smile tugged at his lips. He couldn't even begin to comprehend the amount of love he had for this singular person and the lengths he would go to see her just smile. He quietly kissed the top of her head once more before shifting his position to lie down.

He was careful not to wake her up as he lifted her out of his lap, placing her on the bed and adjusting his lanky figure next to her. Charlotte slept like a baby cuddled in his embrace. He turned to look at her face that adorned an angelic expression. He ran a finger down her perfectly sculptured nose and lips and leaned in to give her a soft peck on her lips.

They both found themselves in the world of their dreams, peaceful and content with life, hoping for more days like this.

Charlotte woke up to find herself tangled in her sheets, in a cold forlorn bed with dried tear tracks running down her face. She opened a single eye and flinched at the beaming rays of the sun streaming into her one-bedroom apartment, once a humble abode. The bright sunshine indicated the start of a new day, in hopes of happiness. But, the powerful rays of the sun couldn’t fill in for the brightness of Jasper’s smile.

She shook away the memory of the day which now haunted her in her dreams. A memory that was soon evolving, altering to form different versions that she kept imagining. Some days she saw Jasper waking up next to her and showering her with light kisses, refusing to let her get out of bed, whereas some days she couldn’t remember past the walk they took in the park on that chilly autumn day.

It had been three years since she had stood at the grave of Jasper John Smith. She wills herself to cry, to mourn her beloved husband of two months. But the tears refused to fill her eyes and her brain refused to believe that her husband had died. Dead, he had left her all alone, to fend for herself in this cruel, unrelenting world. After that day the true meaning of love was lost to her. She didn't know what is was to be in love, to feel loved, to have a person give up their life to be with you for eternity. But, she couldn’t give up on her life, she had to keep living, lead a life, even though it was lonely, depressing and melancholic, because, she had promised him. Given her word as he lay on his deathbed, counting his last breaths, that she will live on. She will keep him alive in her memories and will live to lead a better life. To find someone who would give her what he could not. Love.

Charlotte was miserably failing to keep her promise.

She stepped into her bathroom and went about her mundane routine — wake up, go to work, sleep. On the weekends she would stay inside, trying to get some measly chores done, but by evening she usually would have exhausted herself. So, she would then sit down with her wedding album, going through it one page at a time. When she would reach the tenth photograph a tear would escape from her eyes and fall onto the photograph as if on cue. She would quickly wipe that stray tear away, draw up those walls tighter against her heart and go on to browse through the album. Among the forty-five photographs that were taken on her wedding day, the tenth one held the proof of her humanity. It was proof that Charlotte had a heart which mourned her dead husband, eyes that held his image and a brain that stored the five years and two months she had spent with the only love she ever knew.

Charlotte walked out of her office building, into the cold autumn evening, the wind hitting her face and chilling her to the bone. The orangish red leaves were strewn across the streets. They no longer brought any happy memories to her mind. There was no one by her side to hold her close and keep her warm and autumn was a constant reminder of that. She crossed the street and walked through the park, looking, longing after those happy souls.

She walked past them in a daze, recalling the memory of the day she had dreamed of that morning. The day, that had changed her life, the day that Jasper had proclaimed her as his wife to spend his life with forever, till death do them apart. The day that now only left bitter memories and tears in its wake. She pulled her coat tighter around her shoulders against the harsh memories that threatened to drown her and briskly walked towards her apartment.

The man walked across the path scurrying about, frantically going through his papers and dodging other humans. He was carefully sieving through the files trying to spot any mistakes in his, life-changing, presentation. He knew that this was the presentation that would take all his troubles away; after which he could finally be happy.

He abruptly stopped, scrutinizing the papers, to amend the mistakes he had made. He was standing in the middle of the path and had not seen the girl that was slowly heading in his direction. Charlotte, engulfed by her memories did not notice the man that she was about to walk into.

Maybe it was destined, maybe it was a coincidence. The universe has its mysterious ways and maybe this was one of the tricks it played. A last attempt to brighten the forever mourning girl and to finally give the man what he always wanted, a chance at happiness. Two people, in search of the same emotion, who had lost too much, far beyond comprehension, finally bumped into each other to find everything they were looking for.

They were full of apologies, picking up the papers that had fallen out of the man’s hand and the contents of the girl’s purse, along with the broken pieces of their lives. This incident was the turning point that finally allowed Charlotte to mourn her beloved husband. To finally, be able to look back at the memories she shared with Jasper, with peace and tranquillity. Memories that she cherished, which now brought tears of happiness to her eyes instead of wrecking grief.

As for the man, he had found happiness, in sharing the sorrow that Charlotte had been burdened with. In that instant, they had started to piece back the broken remains to make something new, something different and something loved. Those broken pieces that came together as a whole, celebrating the love they shared for each other and the memory of Jasper.

Maybe it was fated, maybe it was a coincidence, maybe it was Jasper’s last dying wish. Charlotte had found happiness. She had learned to mourn and move on with the help the stranger she had bumped into, at the park. The park was the setting of her story, with its golden hues and autumn air. That’s where it all began and that’s where it was all came to an end.

Charlotte sat at the quaint park bench that was facing the children’s playground. Fall had come around yet again, with its orangish red leaves garnishing the dried-out grass, the bare trees bringing a slight chill in the air. A season she had learned to cherish yet again. Her hands graced the photo album which was opened to the tenth photograph. The photo album that once held forty-five images of happiness now was falling short of space for the infinite number of happy images that were created in the wake of the love she shared with her current husband and the husband she had lost.

She carefully looked up from the photograph and into the sparkling eyes of the second man she had married. She had lost all hope to find that love again, but here it was, within her reach and she sat embraced in its warmth.

She looked towards the playground and spotted her two children, a boy of eight and a girl of ten, running into the open arms of her husband. He caught them in his strong arms and gathered them into a warm embrace. She looked down at the picture, the tenth picture in the photo album. The picture that showed Charlotte and Jasper standing at a beach with the sunset in the background, ready to start their life as a newly married couple. The picture that was once marked by tear stains, now cleaned up to reflect a beaming smile.

Charlotte quickly closed the photo album and looked towards the clear autumn skies, sending a small prayer thanking Jasper, as her family moved towards her to embrace her in their warmth and love. 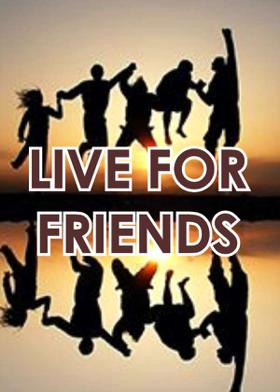