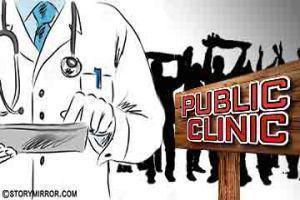 The autumn is running through the wind making everyone go ill and facing its effect, so a cabin known as 'public clinic' is in its best of adulterations. However, nobody is in exact notion to tell how much it's contestant challenge it during such days of illness, but the steams of chemical vapour kept  issuing from nearby chemist shop for medicine and people kept wondering what might be so essential that is being hidden from the public even in the place like 'public clinic'- first, people wonder it to be a very clinical aspiration, a very new innovative medicine, which would be for special medicinal purposes; but thence people started rumours that it might be some illegal drug or narcotics, which the  people even in the 'public clinic' enjoy at high quantities, thus these misgivings helped a kind of blemish in this public clinic now a days to harsh it's situations  in abundance to the competition it already have to face against the other public clinics itself.

One morning, few of the matrons of clinic workers bussed in and stopped near the doctors, informing that the procedure was finally over. There was nothing about the vapour now in the nearby shops and some of the whispering crowds parted in to have a greater look for the substance of attraction. When they come to have a look at it, they found that it was neither 'special medicine' nor 'narcotic for health of the doctors'. It was a strange material, which was having a unique compound, so it was not made for the medicinal purposes, so the people kept murmuring to each other, until the chief doctor of the same public clinic stood up and told them that they had discovered a common 'child aspiration'- it's not too much clinical nor too much acidic or narcotic. So a child who faces fits during the sports practice can have a gulp and he or she will continue to perform at will. So the public roused in high spirits that morning in the same 'public clinic' as usual itself.

As the crowd let the doctors part in- a news reporter got near to talk with the crowd supporting doctor, who looked grim as he witnessed a media spokesman- the man holding camera came closer, while his companion had a halt and asked straight question to the doctor indeed- "Don't you think, it will deprive the spirit of sports?" As the doctor didn't answer him, he continued in monotonous voice- "I believe that the doctors might have discovered a better product, but don't you see that you might face some challenges"- The doctor kept annoyed and ignorant, until the Spokesman shouted at the top of voice, "What if the Indian Medical Association put petition to have a look into it?"- As he saw that none of the doctor wishes to answer, he left outside to search some people in the crowd and fired same questions to the public itself.

As the noise became quiet in the Public clinic- a voice ran out: "He will keep us busy for few days, I am sure of it! But we have only discovered this product to bring our old doctor back- the sports authority are not going to know, what we have discovered, unless they send delegations- so we have to keep an eye on these media reporters...” One of the supporters of the chief doctor was saying to him. As out in the public area, the reporter was listening to the people, who were shouting, "Our sons and daughter sometime feel fatigue, it would be a brilliant aspiration for us! I am hoping to see a gold medal in Olympics through my son! How good it will be to have a proud parent or guardian like that?" So on both sides, it's really to tough, why this product had been made, as it was tough during its proceedings to tell whether it was medicine or narcotics. So now let's try to open up the suspense and tale of a kidnapped doctor.

A phone bell rung somewhere and the servant of the clinic went to answer it. It said in high pitch excitement: "Congratulations to you and your team, the experiment has been worked. Now we shall be able to have lion man at large. You shall send us the experiment and we will send you back your doctor- do you agree?" The servant looked hopeless at the prospect, yet his fellows said him to keep listening to the call which was urgent in context to the liquid as well as their fellow doctor, who the pirates had kidnapped, so he held the receiver, as the voice spoke again: "Please bring the medicinal experiment to the Green Lounge, opposite Nelly Park at tm, near dusk. We shall show you the consequences also, before seeking your doctor towards your aid.” This statement was more horrible, but the servant had replied slowly "yes", as the phone was disconnected and they now had hope that by taking the liquid they could save their doctor.

This whole affair happened 3 weeks before, when a mad scientist was caught on the statements given by one of their fellow doctor in the crime of testing humozemosiles on animals to force them to transform into human kind. Thus the mad scientist was sent to prison, but due to the kidnap of the same doctor by his fellows it had resulted in his release, but it’s now worst to save the doctor, while he was in the madman's clutches. The whole affair had been brought into the newspaper, but it was highly dangerous, no security agency thus had been on the act. However, this time these doctors seemed to be brave than they are thought so because they called to the high profile security agent, who is going to handle over the experiment liquid, as he will reach the place told by the pirates and will try to bring the doctor back. "You don't worry; I will make sure that they shall not be able to reach us at good times! I have a firmly constructed plan, I might be able to reach,” he laughed.

However the doctors still looked worried as they asked, "How are you going to identify them.” As they handed the liquid in his hands, "Don't worry, I have been habitual to that madman, I have his complete details." Assuring them that he would be able to bring the doctor back, he had gone to the place with specially made gun bullets for the scientist and his experiments. The next evening, he was waiting for people to come through and hoping to get the culprit on the spot with the guilty himself.

The night became more dangerous than it had been intended to. A serious noise like roaring reached the security agent's ears. Then he witnessed a 'lion man' grouping his way towards him. He couldn't believe his eyes. Besides, on his own with mad laughter was the mad scientist who had accompanied him, but the pale doctor, who had given statement against the mad scientist, was limping towards the security agent, as he was hoping to get the release. The lion man plunged forward, ready to attack, but it was stopped from doing so by the mad scientist through his pistol, who shouted on the security agent, "You have the medicine? I can control with the pistol, but I am sure this medicine will keep him quiet! Unless we solve his problem, the doctor shall remain in our clutches! Then we will turn him in croc Oman too." Looking straight in the lion man’s eyes the security agent fired three bullets and it had rolled over the floor.

The mad scientist dived to make the commencement of the effort but there was another gun fire, which was not expected by the madman. Three blasts by two separate men allowed the security agent to cover the doctor and take him home. He asked about more similar instances of 'lion man', but he denied, so he was now secured inside the wagon, before the security agent stepped out again speaking to the night instead, "My head has given orders to kill you. Sorry to do so, but I don't want to see any mix breed examples. Goodbye scientist." Three more gun fire in the night's air and the doctor was saved. The security agent informed the doctor’s crew about their secured fellow and they all were in joy, hoping finally to get back on proper terms in their public clinic, which was always 'public' and always been welcoming to people even in better ways, once their fellow had returned safely.

As everyday in this common life now, people come to nurse their injuries and illness, the doctors in their generous hope keep informing them of their role in doctor’s individual life as still they kept saying to the public, "Save the doctors as your responsibilities so that they would wish to do the same for everyone." It's true and fair enough...