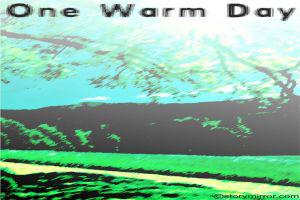 The sun was warm on Ryan’s neck, as he lay upon the grass on grandpa’s property.

He stared across Northumberland Strait along New Brunswick’s shore, the water was as smooth as an NHL rink.

Cape Islander boats were dropping lobster traps, also called ‘pots.’ Ryan was fascinated the first time he saw one of them.  It looked like a small barrel cut in half.

One had been placed on grandpa’s front lawn to attract tourists to his variety store.

Fish netting covered the open end, with an open space in the center called 'Head.' Lobsters were trapped easily when they crawled towards the herring bait.

Ryan drew a monster-sized one in the sand.  Prince Edward Island was like a straight line in the distance.  Behind it splashed the Atlantic Ocean.

Last week Ryan and grandpa launched a jar.  It once contained relish.  But on that windy day it held a note.

Grandpa understood this village would be lonely for an energetic boy. He had a plan to find a friend for his grandson.

Ryan had placed a note in the bottle that read--

like to fish and swim.  Mom and I live with

Grandpa at Lapointe's Variety Store.  Want to be

my friend? I live at General Delivery, Cap Lumiere.

That day the jar floated away on an ocean swell and Ryan hoped it would bring back a friend soon.

Waiting for an answer took a lot of patience. Minutes and hours tumbled into days. This gaveRyan time to think of other things like, since Grandpa’s health was not so good, did mom enjoy working at grandpa's variety store? What if he couldn’t return to Nova Scotia for school in September? What about Christmas holidays with his friends?

He wished grandpa would hurry up and get well. If mom didn’t have to help in the store every day, Ryan would have someone to play with.

But, it was nice living here by the ocean shore in grandpa’s guest cabin which was neat and pleasing. It had large windows on all four sides.  Each morning the sunrise was bright as an egg yolk.  On the western side of the cabin evening sunset completed the day.

This morning Ryan felt rays pour into his bedroom.  “An early dip in the cool ocean might be neat,” he said to his mom.

A natural rock stairway led to the salt water.  In some places it was very deep, so he remained in the tiny cove with a sandy beach.

As Ryan waited for lunch, he watched the whitecaps.  He hoped someone would answer his message soon. Perhaps a new friend from as far as England might find his bottle.  Or, it could be someone from France where his great, great grandfather was born.

His eyes followed the sun climb up the sky. His tummy was thankful that the ground had begun to warm up.  Sea gulls continued to fly around the lobster boats.

She convinced Ryan to go with her for a drive after they ate.  “Maybe you can pick a little gift for yourself.” she added.

Ryan had a worried look on his face. “Do you think I should?” he asked.

"Yes." his mother said quickly.  "If someone finds your bottle, grandpa will be here."

Ryan wished it would happen soon. What if it already smashed up on rocks on Prince Edward Island’s shore? He quickly pushed the thought from his mind.

Buctouche was a half hour drive away, and the scenery was quite enjoyable along the seashore.

“Wow!” Ryan said as they drove beside a beautiful beach in the Acadian fishing village. It wasn’t like the rocky shore near grandpa's store.

"This is the ‘oyster-bed’ capital of New Brunswick," said his mother.

After visiting souvenir shops and a bakery, Ryan became restless. “Can we go soon, mom?” he asked.  He needed to return to his lookout by the ocean.

What if his bottle simply traveled in circles in the middle of the ocean? Or, some boy already found the bottle and didn’t want to be his friend? His mind battled thoughts as pesky as mosquitoes.

Ryan watched her smile as she hung up.  “Hurry, in the car!” she yelled.  Pounding wheels matched his heartbeat as they headed home.

Ryan knew it had to be something good.  But, his mother wasn’t saying anything.

Grandpa was waiting in front of his variety store.  "Ryan! Here’s his telephone number!" His loud call turned to a whisper as he leaned closer,"Someone found your bottle."

Ryan's mouth opened wide and his eyes almost leaped from his head. "My bottle? Someone found it?" He turned to his mother.  “That’s why you didn’t tell me.”

"Yes. He's waiting for your call," she said.

"Who?" Ryan asked.  It was confusing, coming all at once.

"Your message was found near here this morning," Grandpa said.

"Here?" Ryan asked with disappointment in his voice.  “Not even as far as Prince Edward Island?”

His new friend Jacques Forget lived only two miles away. Both boys spent much time talking on the phone.  After all, new friends had to know each other.

Jacques told him how excited he was to find the bottle and the note. He was French but also spoke English and wanted Ryan for a friend.

After both boys’ parents had a chat, plans were made.

Jacques was to visit first.

The next day couldn’t come quickly enough for an excited Ryan.

Finally, his new friend Jacques arrived. Ryan wiped his face once more, checking for any leftover ketchup from a bacon and egg breakfast.

The boys noticed both of them had light colored hair.

“Allo!” You are taller than me.” Jacques said in his French accent.

At first, Ryan was shy. He gave the other boy a solid high five.

Soon they were sitting on the beach at grandpa's shore.

Ryan shook his head in amazement. Imagine his new friend lived just a few miles away in Richibucto Village.

Plans were made for Ryan to attend school in September. He was going to be in Jacques’ class.

Grandpa was very pleased, his daughter and grandson would be staying through the winter.  His health hadn’t improved enough to be alone at the store.

Ryan didn’t mind living here either. Having a new friend changed everything.

“Jacques, time for a swim!” he said.  Then Ryan raced his new friend to the water.