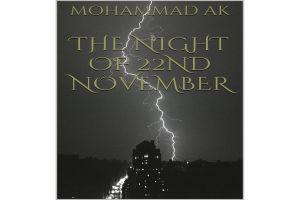 As a rainstorm blew outside, Ali Khan sat watching TV in his apartment. It was one o'clock in the night when someone rang his apartment’s bell.

Ali was wondering as to who it might be at that hour. He looked through the peephole, but couldn’t see anyone. He then opened the front door of his apartment, but no one was there. While closing the door though, he heard a boy’s voice.

Ali opened his door again, but there was no one. As Ali settled on his couch to focus on the TV again, he heard something knock against his window. He rushed forward with more curiosity. What he saw through his window was a boy, about 10 years old, standing next to the bushes with an innocent expression on his face calling for help.

Ali hurriedly picked up his umbrella from beside the door and rushed out, but by the time he reached out, the boy had disappeared.

Fear started building up inside Ali Khan and adrenaline rushed through his body. The rainstorm was stronger now accompanied by lightning. Before he could get back inside, he heard the same voice again.

Only this time, it was coming from the 8th floor of the apartment. Ali saw the same boy standing on the ledge of apartment’s balcony & before Ali could do anything, the boy jumped.

The boy came crashing down, hitting the ground in a matter of seconds and there was no chance for Ali to save him. Blood oozing out from his head, the boy lay motionless.

Ali slowly started to head toward the boy’s body, with dangling footsteps and fear holding him tight as he reached the spot. He thought of picking up the boy’s body, but before he could reach out for it, the body disappeared from the spot and there was no sign of blood left either. Lightning struck in the sky and Ali Khan fainted on the spot.

Next day Ali Googled for any mishaps in that area and came to know that a boy named Sahir, about 10 years old, had died last year, having fallen from the 8th floor of his apartment. The boy had fallen while trying to catch his football when it had fallen from the 8th floor into the bushes beneath Ali khan’s apartment, on the night of 22nd November.

The Night Of 22Nd November