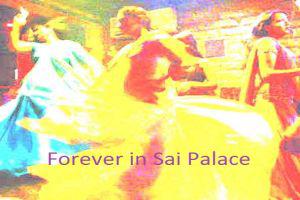 I stood in the balcony watching the noisy revelers in “The Joiners Arms” below. Friday evenings in this distant suburb of London were always raucous. Inside Anjali sat simmering in the dark room, bathed in flickering images.

If I had a day like this in Bombay, I would have fled to Sai Palace. Friends call me provincial – step out and visit Topaz or Carnival - they would advise. I have been there too. But Sai Palace is more personal. I would find Hiren, waiting for me. And Kalyani, waiting for Hiren. My mind went back to the last time I was there.

A year in London, it was getting tough managing so many clamorous “stakeholders” in an interminable project like this. Programmers who want a career path, unit heads who want better margins and clients who want to change their minds every three months.

Unless you had trouble with your previous bill or they suspected you of being a sting journalist,  the bouncers in Sai Palace are a cordial bunch. They nodded me in with bland familiarity. I walked past the undulating floral garlands and the second door into the bar. The large speakers mounted an aural assault that sent me reeling into the nearest table. It was twelve in the night, the time the second shift begins. The gawky freshers retire for the day after their four hours of dancing. The real professionals now step out. Shapely, taller and with more sophisticated make-up, even their steps were more fluid, more …, what a tired word – more sensuous. Kalyani was there too – in her shimmering blue dress. Her navel was covered. Hiren did not like her revealing it. It also meant Hiren would be coming today. I was glad.

Roshan, my unit head, had called in the evening while I hurried on my way to Oxford Circus station. The usual stuff – too many people and low margins.

“We ought to move some people over to Tokyo. They are willing to pay 1300 dollars per day. Compared to the 400 Pounds we were billing here. That is like double the money. We will give you more freshers who can ramp up. Let's move some of the seniors….”

Anyone earning legal money is not very welcome in Sai Palace. They have nothing against them, but white-collar salarymen have fewer incentives to blow their cash. Kalyani was performing, with visible disinterest, for some young executive types when the fat man in the gray safari entered. She abandoned them to take her position in front of the fat man’s table. Kalyani’s sinuous movements and swiveling hips made her intentions clear.

The safari pulled out three one-thousand rupee notes from his shirt pocket. The waiter -  Feroze from Kurla West – immediately stepped forward to pick it and returned with a stack of fifties. The safari handed over about half of the stack back to Feroze. Kalyani smirked, playfully chastising his miserliness. The man handed over the entire stack. Kalyani blanked out the whole world and danced just for him. The man stared in intent and honest lust.

Feroze stepped around her – careful not to break the sexual tension – and flicked the notes off his left palm with his right thumb. Each note jumped off his palm and floated in the air before racing down into the smoke-covered floor. Feroze timed his circumambulation to perfection completing the circle just as the last note flicked up into the air and kissed Kalyani’s face before wafting down to her swaying feet. Kalyani gently broke the trance and still in step, picked the notes and put them into her box by the lit up the floor. Box No.30 which kept track of her earnings. Every day the box was emptied and the contents distributed – 40% to the establishment, 30% for protection and 30% to Kalyani.

Roshan’s voice droned on, “Listen – your project code will look better when you have youngsters. They cost less so the margins get better.”

Our billings are tracked against the project code. When the project ends, the accounting system will churn some reports and tell us how much profit my project code earned. I would get my bonus – a percentage of the profits.

I refused to agree to his proposal. Roshan wanted to abandon one client and cozy up to another just for the billings. That is so…so…mercenary.

Sometimes you just want the old times back. Like the time, Hiren and Kalyani were inseparable. And I was a cheerful appendage. Hiren started life as a jobber for Parbhoo and Khanna. The eponymous gentlemen were dead forty years and Dhalia Seth owned the stock-broking firm now. After the bourses went electronic, Hiren had reinvented himself as a trader. Hiren spent square of the day’s market movement here in Sai Palace. A thirty-point shift meant a flat day – less than thousand rupees. A two-hundred point movement meant 40,000 Rupees of jubilation or mourning. Hiren was Kalyani’s Aashique. That meant, in this room of pot-bellied contractors, civil servants, and businessmen, Hiren had a sort of right over Kalyani. He could take her out though she had to be back before the morning.

Theirs was a strange love. Hiren’s wife refused to blow him. Kalyani loved the fact that she did not have to fake it with Hiren. Just tell him it did not happen. On these two simple facts did a deep relationship stand. But the Seth would surely fire Hiren if this came out. That is why Hiren’s marriage was safe.

Kalyani was my first. Hiren had insisted. I was touched by the gesture because I knew he cared for her. In fact, that was when she told me about the faking bit. To put a fine point upon it, she put on a cataclysmic show. The only other time I had seen something like this was Meg Ryan in the restaurant scene. Kalyani was better than the original – the original fake I mean.

:R___, grow up. At your level, you cannot still be excited by dollar salaries. You ought to be remote managing now. Start multi-tasking. You need to scale up into resource allocation and out of resource management.”

“Why are you onsite at all? Think about it”, he concluded. It was a bad sign. Roshan loves to drop these ominous hints and usually follows them up with action too. I decided to speak to Anjali as soon as I got home.

It is not that Anjali loves London. But the prospect of living with her in-laws scares her. The meals on the floor, the open toilet covers, the TV that runs forever, it just drives her nuts.  She knows that any city in India we lived in, my parents would join us. My dad had it easy. He had four other siblings. Whenever his wife wanted some privacy, he just had to send his parents to Dombivali or Goregoan – whoever was due to play doting son next. Me – I had to move continents.

I told Anjali about moving back to India. It made sense to me in many other ways too. She was furious. The funny thing is her parents live with her brother. But I cannot raise that as an argument. Apparently, her parents are more civilized. And her brother is better brought up. He dusts the ceiling fans every Sunday morning. I don’t even notice. Finally, she said I could go back if I wanted. She would stay on till her visa expires – another year at least. It ended as usual - with me in the balcony and Anjali sulking on the couch.

Feroze came up to me, “Kalyani wants to speak to you. Asked you to come by the side entrance after fifteen minutes.” Usually after two, they closed the main entrance and visitors had to leave by a small side exit.

I was worried. Things weren’t going well for Kalyani now. She was twenty-eight and finding it difficult to match steps with the younger dancers. She was having fewer and fewer big days. In fact almost nothing on the days when Hiren did not turn up.

Shetty had told her that he was moving her to the first shift. He consoled her saying it would be easier for her since no one expected too much action in the first shift. She could corner bulk of the takings because she would be so much better than the others. I stood up and stepped outside. A mild drizzle traced out the beams of light from the passing cars. Kalyani was there, waiting for me.

“Hiren won’t be coming today. I spoke to him in the evening,” Kalyani said.

Her voice was loud and gruff in the silence. Twelve years of working in 110-decibel conditions had taken their toll. She didn’t even hear very well.

“What happened Kalyani. All well with you two?” I asked.

“I don’t want to do the first shift. I have my pride intact. I told Shetty I am going back to my village after this month.”

“Oh. So, will you leave Bombay then?”

“Hiren says he will set me up somewhere. He wants me to stay on. I refused. I want to rest now, to go home and take care of my parents. My uncle’s son wants to marry me.”

My eyebrows shot up. Marriage. “What about Hiren?”, I asked.

“He is very angry. He says he will kill himself.”

Hiren was capable of doing that. I was seriously worried.

“So, what have you decided?”

“R___, I have to do what I have to do. And live with somebody else’s choice about what they want to do. What else can I say?” she ended sadly. I wished her well and walked out.

It is more than three years since then. I never spoke to Kalyani again. I call Hiren at least once a month, in fact even last week.

I stepped back into the living room. Anjali had gone off to sleep. I picked up the yellow pages book from the rack and flipped to the “Movers and Packers” section. I think I mentioned it. A visit to Sai Palace always clears my mind.