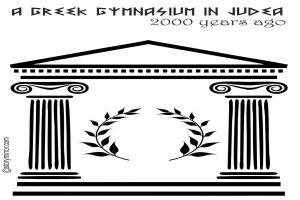 “Are you going to crucify us?” Joash blurted.

He was the youngest of the trio at eight, and the boys had been caught trespassing in the Greek gymnasium, a monument to ‘mortal pleasures’, a description which had intrigued more than repulsed the boys. It had been built by their previous conquerors, the Greeks, they knew. The three of them, not yet in their teens, had been lured by the excitement of trespassing in the dark of night, into an institution that their own people, the Jews, were disdainful of. Now, with Judea under a new master, the Romans, capital punishment of crucifixion was not uncommon.

“Crucify you! Ho! Ho! Ho!” The large, bald man who had caught them in a room lined with musical instruments, slapped a palm on his thigh and roared with laughter. “Crucify you!” he leaned on the door post and wiped his eye. “The gymnasium, my dear boys, is an establishment for the higher education of men. We do not crucify anyone, trespassers or not. Ho! Ho! Ho!” he laughed again.

The boys were confused: this was hardly the reception they had anticipated at being caught trespassing. Somehow they had expected more dignity to be accorded them at their daring entry and consequently, to be respected as Prisoners of War.  But to be laughed at . . . well!

Stung to indignation, Abner demanded, “Why cant we see the gymnasium? We are men too!”

This was received with even more laughter. The man, when he was more in control of himself realized, rather belatedly, that his ‘prisoners’ were in dead earnest and by the looks on their faces, it was obvious their manly pride had taken a blow.

“Forgive me gentlemen.” He said soberly. “Let me introduce myself. My name is Florus.”

“Florus, what?” Andrew demanded. He was still smarting, and he knew that all men, especially the Romans and Greeks, had long complicated names, and in introducing themselves would rattle off their entire collection—the longer it was, the more impressive it sounded. Only friends and servants called each other by their first names. Who did Florus think they were?

“Just, Florus. Everyone calls me Florus. My friends too. I hope we can be friends.”  His kindly eyes twinkled at them.

“Well . . .” Andrew studied the man. Was he still laughing at them? No, he seemed sincere enough. He extended his hand in friendship, “I’m Andrew, of Gallilee,” he stated formally.

“I’m Abner, this is my brother Joash, and we are from the village of Emmaus.”

Florus nodded at each one of them in acknowledgement. “So, came to see the gymnasium, have you? Well, like I’ve already told you, you are too young to be members here; maybe in a few years time. But I can show you around a bit.” It would be safer to take them on a guided tour than to have them blundering into the wrong rooms. Let them retain their innocence a little longer; the gods knew, there was precious little of that in the world anymore.

“This as you’ve probably guessed, is the music room, though not many of the members come here to refine their musical abilities,” he snorted in disgust. “In Greece, now they appreciated the finer things of life—not so the Romans.”

“Are you a member, Florus?” Joash asked.

“Of course he is, or he wouldn’t be here,” derided his brother, Abner, the eldest of them.

“Not really,” answered Florus. “I am a Greek slave and I serve in the baths. I massage the bodies of the members.”

“Baths? They come all the way here to have a bath?” Joash was incredulous.

“Exercising and training is hard work, my boy. A lot of hours are spent on honing the body to perfection. It requires a lot of determination, an unwavering dedication to his chosen sport. There should be no distractions . . .”

“Yes, yes, Florus, but why should they take a bath for that?” Andrew asked.

“I was coming to that. After all that strenuous activity, it does good to relax in a bath. There is the Frigidarium, with cold water, the Tepidarium, with lukewarm water, then finally the Calidarium, with hot water. It is so soothing. Then they come to me, and my fingers,” he wriggled them for his audience, “Will make even the best, perfect.”

“Is there anything else here?” Abner asked. The baths didn’t sound very exciting. Avoiding them would be better, he felt. It might even be safer not to visit that particular area of the gymnasium—they seemed keen on everyone going through the torture, three times! And in a variation of temperatures. Florus was a grown up and grown ups were always keen on little boys taking a bath. Yes, it would be much safer to avoid that area.

“There is the Ephebeum, where we hold lectures and listen to what the thinkers of the world have to say. We discuss poetry, philosophy, medicine, oh, just about anything.”

“Er . .  sometimes. Then of course, we have the main area where the athletes practice.” Politics was a dangerous subject to be discussed, especially with Herod as the King of the Jews. The king was so suspicious of everything and everyone, he’d even arrest his own shadow if he could, thought Florus. “The arena is now occupied as you can see. Those two are the current favourites for the coming Actian Games, two years from now. Antonious and Servius—best friends actually, but watching them wrestle, you wouldn’t think so.”

“Why don’t they wear any clothes?” Joash interrupted.

Why not indeed. Florus struggled with an answer. How would one present the human body in all its grace and beauty to someone whose very culture decreed that the exposure of one’s physical self was decadent and base? “Well,” he began slowly, “So that the ripple of well formed muscles, the shape of the arms, the thighs,” his fingers moved to emphasize his words, “The clean smooth, fluid movements of the body, whether locked in mock combat or flowing with speed on the tracks, the tilt of a head, the shape of a chin or knee, nothing will be hidden from the view of the audience. That all may appreciate every part of the free, exalted being that is Man.”

The boys looked at each other quite surprised.

“Sophocles once said, Florus continued unabated, ‘The world is full of wonders, but nothing is more wonderful than Man.’ And so we do not conceal what is naturally beautiful. We value beauty; beauty of the body, and beauty of the mind. And true beauty can only be expressed and enjoyed in freedom. Liberty. Each man should be allowed to do his work according to the best of his abilities, to speak his own mind without fear of reproach or interference. No man should claim to be the master of another without the consent of the other.” He stopped, lost briefly in the memories of another time, another place, where Work was Art and Art was beautiful and the mind and body were unfettered.

His audience waited silently. Most of his words made little sense, but the essence of his emotions had touched them and they felt somehow lacking in not having understood.

“Now you boys had better run along home before anyone else realizes your presence here. They may not be as lenient as I.”

Florus escorted them to the main gate and watched them disappear down the street. He shook his head in kindly amusement. Ah! the innocence of youth. He could remember when he was their age.

Running wild on the mountain slopes of Greece . . . Before the soldiers came! But no, it wouldn’t do to rake up old ghosts . . . He sighed. It was all so long ago. But the memory was fresh, and sometimes, in an unguarded moment it would all come rushing back in a torrent of pain and fear.

He would hear the pounding of horses’ hooves, like distant thunder, the shock as the mounted soldiers burst into view! The frightened screams of his people as they had run for cover.

Florus, barely more than half a decade old, had been rooted to the spot in fear! His mother had come back for him, tried to run with him. A horseman had grabbed her by her long hair and swung her up on to his horse.

Mother had fought the man, clawing his face and biting his hand as he tried to control his mount. He lost his hold on her, and she fell to the ground, to be narrowly missed by rearing hooves!

Florus had run to her, tried to pick her up, tugging at her. All around him shouts, screams . . .  the smell of smoke. She moaned but did not get up; he willed for her to open her eyes, but she didn’t. He huddled close to her, sobbing in fright. He saw his father grapple with a soldier, while their thatched cottage formed a flaming background . . .

Then the people, his friends and neighbors, those who were still standing had been rounded up, the weak and wounded killed on the spot; among them, his parents. And Florus, along with the rest had been sold into a lifetime of slavery.

Florus wondered where his brothers were, what had been the fate of his sister . . .  He sighed, shuddered and wiped the beads of sweat that had appeared on his forehead. This wouldn’t do. He put those tormenting thoughts aside and walked determinedly into the building. He had work to do.