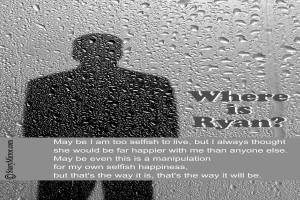 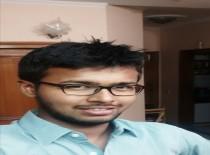 The blissfulness of love, the tyranny of lost hope, I had seemed to savor them both. I was with her, but she wasn't with me. She was still lost in love, but not with me. It had been over a month since our marriage but every time I tried to speak, she always ended up reminiscing Ryan’s name.  But whenever I tried asking, who is Ryan and where is he? She would silently move away and sit by the window, weeping. I wasn't able to handle this, this was the very woman I fell in love with, on the very first sight. But even after we were married, she had failed to notice the love in my eyes which I so wanted to show her. The hope had started to wither away, and the whereabouts of Ryan were only getting mysterious.

I made an anxious call to my in-laws about who Ryan was, where I could meet him. But I was usually met by a coherent no; it was like people genuinely didn’t know who he was. Even her friends failed to recollect someone with that name being close to Sarah, my beautiful Sarah. I had promised her to make her meet Ryan, and it’s been over six days and I am still stuck with only his name. The only thing which Sarah told me was that Ryan worked in a grocery shop, near her place. When I inquired there, no person by that name existed. Was my wife tricked by someone, who even concealed his name by a fake one? I didn’t know where to find answers to my questions. Until that day, when I actually found where he was.

It was a rainy night; I was waiting for my bus at the village depot, and was trying to light a smoke to beat the ache in my head. When a man in white made his way towards me, in midst of the smoke and the rain, and introduced himself as Ryan. I was shocked, how did this happen? I thought now Sarah was mine, I was about to go back and give her the news that Ryan didn’t exist; and tell her that it was only in her head. I was happy until I met him, now I felt like someone was screeching the last etch of my life away from me. I didn’t want to lose her, I really didn’t want to. But I had promised her, now I needed to keep that up. I knew I loved her way more, that I could even sacrifice my happiness for her. It was happening now; tears were hidden by the droplets of rain while the pain found solace by the thunder in the sky.

Next day, when I told her the news, she was devastated. She didn’t speak to anyone for over a week, but she couldn’t stay in that condition forever; she had to make a comeback. I loved her like no other; I seriously did which she eventually realised. But the guilt of that day is still a lot fresh, but seeing her smile makes me forget the horror I committed.

I still remember the expression on her face, when I lied to her that Ryan was married and is now living happily living in some other town. While the one which hurts me the most was the lie which I told him, Ryan, that Sarah had forgotten about him and is happily in love with me. He was broken; it was like he had no other thing to live for. The bus had arrived that day, but when I took my seat, I could still see him in the bus depot, on his knees, unable to understand the tyranny of lost hope. I tried seeing the other way, but the conflict in my heart couldn’t be resolved. I had committed the gravest crime and I had no idea how to correct it. The only thing which allowed me to breathe was in hope for the blissfulness of love which I had selfishly pulled away from the other. I didn’t deserve it, but I wasn't going to let it go.

May be I am too selfish to live, but I always thought she would be far happier with me than anyone else. May be even this is a manipulation for my own selfish happiness, but that’s the way it is, that’s the way it will be.