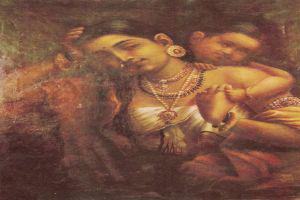 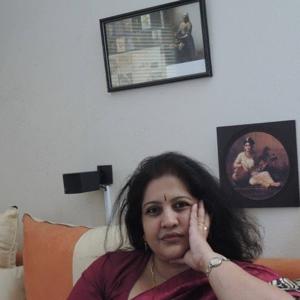 Asha skipped in through the gates after getting down from the school bus, her satchel rattling and her lunch bag waving wildly. She smiled as Chander the watchman gave her a mock salute.

‘What is in that lunch box baby?’ he asked. ‘Sandwiches as usual…’ she replied without turning, her disappointment evident in her voice. She spotted Madhu, her best friend and they both began running in a bid to reach the classroom first.

In class her teacher had a surprise waiting for her. She was to play the lead in the class play Red Riding Hood.

After a hectic morning, I sat down thankfully at my desk taking a much-needed break. I stared at Asha’s photograph on my desk. Dressed in a bright red T Shirt and a denim skirt, she had given her best smile to the camera. She was my three-foot tall angel, my world. I sighed, thinking about the argument we had that morning. Kritya wandered in with a mug of steaming coffee, ‘Hey! Have you sent out the reports we prepared…’she stopped in mid sentence.

‘How did you know?’ I asked with a weak smile.

‘ I am a mind reader …I can read almost every look that crosses that pretty face!’ she laughed.

‘So, what is that 5 year old minx troubling you about, this time?’

‘Kritya, these days, we fight mostly about food… I am trying to teach her healthy food habits … but she resists so much! She threw quite a tantrum this morning all because I packed sandwiches again… You know… She seems to be gaining weight  … I think I must visit her school and talk to the P.T instructor.’ I held up my hands in frustration.

The telephone rang just then, signaling the end of my break and I plunged back into work with a deep sigh.

It was 7:00 pm when I returned home. Shanti, the domestic help, bolted for the door after mumbling something about dinner – I smiled after her- she had her own set of troubles with a difficult husband and two young children to look after. In the evening Asha was her normal endearing self again. After dinner, I put her to bed.

‘How was school today? What did you do?’

She rambled on non-stop. I smiled. Then she said with a pout. “Madhu’s daddy came to pick her up today!’

She turned to me and asked, ‘Why is daddy always away?’ When is he coming next?”

‘Daddy is working very hard honey … what did he tell you on the phone yesterday? Did he not say that he would come in two weeks? With…’ I paused on purpose with my eyes dilated and signaled with my hands outstretched.

I waited for her to say ‘with lots of gifts for me!’

But she turned over and wailed ‘I miss daddy! I want my daddy now …’

I cuddled her close to calm her but her tiny frame calmed the loneliness I felt inside.

She suddenly sat up and said, ‘Mamma! Mamma! Teacher told I am going to be Red Riding Hood! Me!!! Madhu was so angry you know!’ she chuckled.

I gave her a tight hug. ‘We must buy you costumes… let’s go shopping this weekend!’ I told her.

‘Mamma read me the story!’ she commanded falling asleep midway.

'Where does your grandmother live, Little Red Riding Hood?

A good quarter of a league farther on in the wood; her house stands under the three large oak-trees, the nut-trees are just below; you surely must know it,' replied Little Red Riding Hood.

She watched him with a fixed stare as he entered the darkened classroom. He smiled as he signaled her to be quiet, then handed her the bar of chocolate. She took it, her hands trembling, but as she was very hungry, she began eating it, unmindful of what happened next. It was their secret routine that he had taught her. A few minutes before school ended, she would ask to visit the bathroom and get into one of the empty classrooms. He would meet her there with a bar of chocolate.

Asha felt really special from all this attention. She thought she was being with her father in those moments  ‘Oh how I wish, that uncle is my father she would think… then he would be with me every day!’  He would smile and cuddle her and would tell her repeatedly,

‘This is our secret; don’t tell anyone, not even your mother! Do you understand?’ his voice had grown bolder and sterner over the days.

She hid the half eaten bar in her pinafore and ran to join the queue to get into the school bus.  Asha pushed back the hair that had escaped from the tiny pigtails her mother had struggled with in the morning, impatiently. She took out the bar of chocolate and ate it frequently making sure that no one was looking – she had to finish it before she went home or it would spell big trouble as her mother would recall tooth paste ads and threaten her with tooth decay.

That night when I bathed her, I noticed the mysterious red marks on her body. ‘What is this Asha, how did this happen?’

Asha looked confused and turned away. I shook her and asked her again insistently. My voice taking on urgency that surprised me.

I froze as I heard her speak. I put her to bed mechanically, my mind racing through what I must do next-  Should I complain to the school?  Complain to the police?  Go the press? Get my husband to come back?   Withdraw her from school? As these questions raged …  at the background lay other thoughts …

‘So he walked for a short time by the side of Little Red Riding Hood, and then he said: 'See, Little Red Riding Hood, how pretty the flowers are about here - why do you not look round? I believe, too, that you do not hear how sweetly the little birds are singing; you walk gravely along as if you were going to school, while everything else out here in the wood is merry.'

Thoughts - which I had locked away in labyrinthine vaults.  I lay wide-awake beside Asha and thought of that Diwali time long ago. I must have been four or five years of age then. My parents and I had gone on a visit to my uncle's home in a remote village in Andhra Pradesh. It was a tiny, sleepy hamlet with just one main road that formed a part of the state highway with the village extended broadly on either side of it. My uncle was a government official of some sort - he was an 'Executive Officer' - I had heard my mother mention it several times over, to friends.

My uncle had transfers every few years and my mother, who had the travel bug in her, would make it a point to visit every new place and turn it into a religious tourism op visiting all the temples in the towns and villages nearby.

Visiting my uncle was always a happy prospect. My only surviving grandparent, my grand mother lived with my uncle and was particularly fond of me. I had fond memories of the house, its people, the swing in the front yard and the banana plantation at the back.

And then, there was grandpa. That’s how I addressed the old man, who was a neighbour. He had a kind face and was extremely affectionate from the minute he saw me.  He was a regular visitor at my uncle’s home. My grand mother, a very kind hearted woman had taken him under her wing ever since his wife’s death. He sat me on his lap and put his arms around me at our very first meeting. I tried to free myself but he playfully tightened his grip and everyone present laughed.

The next couple of days were magical. I remember him seating me on the swing and swaying me gently.  Then he said in calm excitement,

‘Kala! There are ducks in the village pond. Would you like to see them?’

At day break the next day I had hurriedly doused my face in the cold water from the galvanized metal bucket near the well in the back yard and gulped down a glass of milk sitting at the veranda, craning my neck impatiently waiting for his arrival.  I set out eagerly, holding his hand as my mother watched indulgently from the veranda.

We exited through the banana groove and we made our way through narrow embankments that skirted the fields growing paddy and corn. I stopped to gawk at the bullocks that ploughed the fields, but he dragged me to the mango orchard that lay beyond.

‘So she ran from the path into the wood to look for flowers. And whenever she had picked one, she fancied that she saw a still prettier one farther on, and ran after it, and so got deeper and deeper into the wood.’

Right in the middle of the orchard was a huge pond and there were ducks there swimming in the water. With a surprising agility he jumped in, intent on startling them and they quacked and moved away indignantly.  I waded into the water in eager pursuit of the ducklings, which always moved under the protective wings of their mothers. But I found myself sinking in the soft mud and quickly darted back to the shore.  He laughed at my antics.

‘Oh, your dress is ruined!’ he exclaimed in alarm and made an elaborate effort to squeeze the water from my gown. I felt uncomfortable suddenly. I wanted to get back to my mother. He seemed to agree and we began walking back.

We came upon a patch in which grew large tamarind trees.  I remember being pushed to the ground and hands that groped urgently. I must have screamed and struggled as my dress tore and a few farm hands came upon us. I am not sure if they saw anything.  ‘Grandpa’ left the scene quietly and I watched him leave through my tears.  The farm hands escorted me home, but they said nothing, to my mother. He came warily the next day, but I kept my distance never leaving my mother’s side like the ducklings.

He gave an uncomfortable laugh –‘ She didn’t like the ducks very much!’

I grew quiet over the next few days. I told my parents that I was bored and we cut short our holiday and returned home. Though I hated it, I made no attempts to tell my mother. Memories of that event never left me, returning with a relentless regularity. Nightmares of lying there in the patch and looking up at the sky through the trees haunted my dreams for a very long time.  I also felt guilty for not exposing him. Had I done so, I could have perhaps saved his other victims…

Today, my daughter had become the unsuspecting victim of child abuse. But I was ready this time. This time there was no escape for the culprit. This time he would pay…

Twenty-five years later, I get up at the first light of day, with a new resolve. I place a phone call to my husband asking him to catch the next flight home. I am getting ready to go to Asha’s school to sort things out. I wake her up to tell her that she will spend the day at home with Shanthi. Her scream of delight cheers me a little.