This is an incident that took place when I went to travel ***** (A district of Karnataka) with my 3 friends. We were returning from the place to our hostel at night at 11:45 pm. I was driving the car. When it was close to 12, I was driving in one of the roads of ***** and suddenly my driving was interrupted by a bus horn which was constantly heard from behind us. When I noticed carefully, the bus driver was waving at me and was telling me to stop the car.

"Akash!! All the vehicles have stood behind us!!" One of my friends Nikhil said surprisingly, peeping outside from the car window. When I myself turned behind to see what was the matter, I could see that all the bikes, lorries,auto-rickshaws, cars and other vehicles were standing a little far from us. I was confused, I wondered why they all stood instead of moving ahead. When I was unable to realize what was the matter, the bus driver shouted once again a little loudly telling me to move back and suddenly he became silent.

I still didn't get the matter, for there was nothing dangerous standing ahead, neither the road was beside the mountains so that there might be a danger of stone falling from above. But still seeing the vehicles standing behind my heart started to beat with some unknown fear.

Suddenly there was pin-drop silence. Neither the driver called us again nor any other people opened their mouths. When I looked at the time it was 12 !! And then my ears listened to that creepy female voice mourning that I had never ever heard even in my nightmares. It was the creepiest sound of a woman crying. It was so scary that even when I remember about it now I tremble out of fear.

We listened to a creepy weeping sound of a woman which seemed to approach nearer and nearer to us. I was a man who never believed in ghosts or paranormal forces but that day my eyes shocked my brain that never believed in phantoms. As the sound of the weeping woman came near to us we could see a black shadow like the dark image of a woman that suddenly flew and sat in the road and started weeping even loudly. I and my friends were terrified. We could clearly see the creepy image sitting on the road and weeping with the sound that could give anybody a shiver. We saw it from such a small distance.

The creepy image cried for a few minutes and then flew in the air suddenly. The way it flew again scared me so much for it was 100% confirmed that it was a ghost and I drove the car with 140 speed and we all reached our hostel and slept fearing and shivering.

The next day we visited Hanuman temple and gave a prayer. I never saw ghosts with my naked eyes. For me, this was the most terrifying incident of my life that I nearly felt as if I had an attack in my heart.

But even though I was scared I was curious to know what that creepy thing was and why had the vehicles stood the other day. Were they knowing about this creepy creature? What was the story behind this? To know this I went to the same driver who was horning at me and telling me to move back the previous night. When we approached him and asked him the reason for the vehicles standing he said to us,

"Sir, It happened that one day a mother and daughter met with an accident in that place and died on the spot. After that every night that creepy woman's image comes and mourns on that spot for 5(12:5) minutes and goes away. It happens every day from 12 to 12:5. During this time all vehicles stand until the image goes away. We acknowledge those who are not aware of this every day. The first day even I was terrified and I had got a fever but now I and many of my friends are adapted to this paranormal phenomena. But till now except you, nobody faced that ghost from such a close distance. Its God's grace that the ghost didn't harm you, sir. "

When he said so we were even more terrified. This was the most haunting experience that I ever had in life. Even today in ***** in that road, on that spot, vehicles stand from 12 to 12:5 and until the creepy lady passes away. Strange huh!! I wish you never have such a terrifying experience!!! 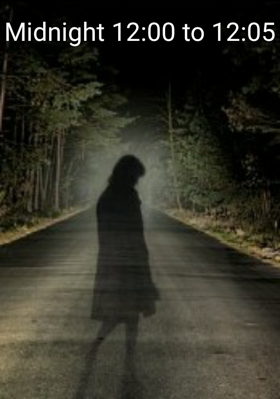