A Fistful Of Soil

A Fistful Of Soil

‘After a day full of adventures, little Leela and Joseph stood under their secret cove near the fishermen’s bay. The sound of waves crashing over the rocks provided them comfort as it had been their lullaby for as long as they could remember. “Let’s meet early tomorrow, Joe! appa has his old fishing nets stashed away. I’ll sneak one and we can catch those big birds that fly around the coast.” Having planned their day ahead, the two children made their way home.’

‘Suddenly there was a huge crash and people started running and screaming. There was a stench of blood, smoke and despair in the air. Joe had wrenched himself from Leela’s grip and started running in the direction of the fire. Leela then realized their parents’ home had caught fire and her amma and appa were trapped in there. People were smothering her from all sides and stopped her from running behind Joe.’

‘The big bad men from the military that her parents had warned her about had surrounded the area and were attacking the people. Before she could protest, someone dragged her from the beach and took her to the boats which were tethered to the rocks kept ready at all times, to escape the country. With tears streaming down her face and huge sobs of agony, Leela grabbed a fistful of soil and stuffed it in her pocket. That was the last time Leela saw her beloved motherland, Sri Lanka.’

10-year old Jessica listened with rapt attention to the story her Amamma (Grandma) recounted. Despite having heard the story so many times, Jessica’s heart would always go out to poor Leela who lost everything on that fateful day. She asked her Amamma if there was anyway Leela could go back to her country to which her Amamma always replied saying that only time will tell. Slightly confused, nevertheless satisfied Jess would go to bed.

Years later it all made sense. Her Amamma had been separated from her family and motherland during the civil war in Sri Lanka and had taken refuge along with many other victims of the civil war, in Canada. All her life, Amamma’s only wish had been to go back to her motherland. Now, the civil war had finally come to an end and Jessica had been able to track down her Amamma’s destroyed house near the Fishermen’s Bay in Lanka.

She had flown down with her Amamma to her ancestral land. On reaching the Bay area, Jess took in the sight of the beautiful palm trees, the resilient rocks, withering the wrath and the love of the cascading waves crashing against them and the warmth of the Mother Earth. With silent tears streaming down her face, Jess opened the urn containing her Amamma’s remains and poured it into the welcoming sea.

In the joyful calls of the cuckoo, Jess could feel the rejoicing of a mother having been reunited with her long lost daughter. Yet, there was a distinct mourning in the air, signifying all the years her Amamma spent pining for the return to the arms of her motherland.

As Jess walked along the sands of the beach, she came across a memorial to all the victims of the civil war. Jessica wondered if Joe’s name would be there, but decided against looking. For, whether her Amamma’s friend returned home or not, this would always be the place where his heart and happiness lied.

In the orange hues of sunset, there lay the hopes and agonies of lakhs of victims of the fateful war. They might not have been alive to see this, but their motherland was now peaceful and free. 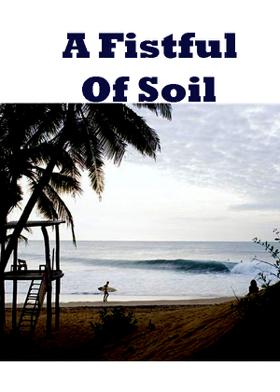