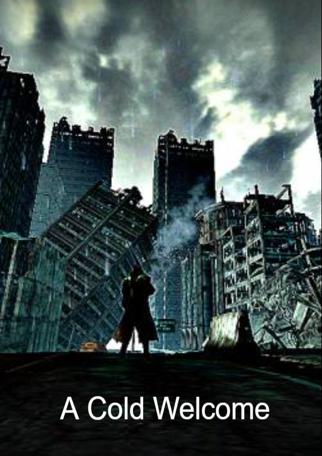 A loud buzzing can be especially irritating when you’re enjoying a peaceful sleep.

The buzzing kept on getting louder and louder, till the point it became unbearable. A pair of bright grey eyes snapped open before blinking painfully at the bright sunlight. It was painfully bright!

I am not a well-built man quite the opposite. I am thin frail even and the pale complexion did nothing to help my case. Scrunching his head in thought trying to remember the last thing he remembered.

What happened! How did I get here?

The oil wars that was the last thing that came to mind. The worst war ever in the history of mankind that wiped out most of the world’s population. Fought with bombs so powerful that they changed the entire geography of the planet. Waking up in ditch surrounded by trees brought in the harsh reality of a possible post-apocalyptic world.

Alright, I need to get out of here and try to make some sense of what is going on!

Standing up was a chore. Weak legs almost seemed wooden and unresponsive the entire body pained as though being stabbed by a thousand knives simultaneously. Crawling seemed like a much better alternative.

With a great show of strength and a mighty heave, I pushed myself off the ground and onto my feet.

Now to get out of this jungle and get some idea of what I’m dealing with!

That thought had barely been processed when I heard sounds of rapid gunfire. I scrambled behind the nearest tree and looked around for the source. A person was shooting at another who was oddly standing still, as though he was a statue. The bullets impacted the chest of the victim and surprisingly left no trace! And then he moved, moved so fast that all I saw was a blur. The next moment the guy with the gun dropped to the ground clutching his chest with a knife sticking out of it. All was still for a moment and then with a flash, the victim vanished

I reared back in shock! What sort of witchcraft is this! Keeping still I looked at the other attacker walk away, cool as a cucumber! Without a clue as to what was going on, I was truly horrified with that callous and inhumane attack.

Was murder legal now? Was there no police to go around? These questions were but a few among the various that went unanswered, for now.

My best chances for any sort of answers seemed to be in following the attacker as quietly as I possibly could and hope for the best.

The attacker continued walking for almost half an hour, and determined to obtain some answers, I dragged myself along. He stopped multiple times to listen to the surroundings, I was sure he’d heard me when he would start walking again, almost as though he was leading me someplace!

Shaking my head of those crazy thoughts I stopped when I realized the hooded person had entered a clearing and vanished into thin air. Cursing, I looked around and tried to find any clue where he might have gone.

Nothing! He couldn’t have just vanished into thin air! But then, where did he go? Tired and irritated, I let out a huff and sat down leaning against a tree. Just as I was losing hope, between my laboured breaths, I heard a slight beeping sound. Scrambling to find the source, I finally located it.

Fixed on a tree was a device, and looked suspiciously like a control panel to a gate, and just my luck! It was bio-metrically protected! Taking in a deep breath, praying to the gods above, I pressed my palm against the scanner.

“User verified, Sancus. Welcome back to Torn City!” A harsh metallic voice stated, and a blinding flash later I was sucked in.