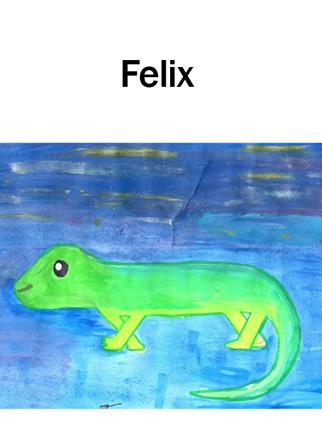 “At midnight I woke up to the sound of a loud “Thud, Thud”. I hopped out of the bed and put on my bunny slippers. I looked around. Nothing. I was home alone, so I thought I was hearing things. My little sister was at her school sleepover. My parents had gone for a movie and would be back at two. I wasn’t sleepy as I had taken a long nap in the afternoon. I wanted to watch TV. The only problem was my parents had hidden the TV remote. I had a TV in my room, but it only streams movies from a laptop. I didn’t have my dad’s laptop which all the shows and movies. Suddenly, a light bulb flicked on in my mind. I had secretly stashed a few movies in my pen drive. I set it up using my laptop. It was pretty old. Even though it looked pixelated I managed to get through half.

Suddenly a “Thud, Thud” sound intruded my quality time with snoopy. I looked around when, “AAAAAAAA”! I let out a bloodcurdling scream as I took in what was in front of me. It was a hideous, huge lizard. I ran to my room as fast as a cheetah. It was down the hall. On the way I grabbed everything I saw. I hopped under my black blanket after making sure it was pitch black. I flicked on the flash light of my phone to look at what I got. I had a handbag, a 30-centimetre plastic ruler, a few broken pencils and some paper. A moment later I noticed a book on the bed as well.

I knew it would break-in soon. The glass was thick, so I had a bit of time here. I looked up 12 feet lizards on google. It showed only one image. I saw the title and froze. It said “Ferpinous 12 feet lizards”. But what really freaked me out was their diet “Carnivore, man eating lizard”. I took out my phone and did quick Google search on Oreza Animal Reserve. “I called the number with my phone. I wasn’t allowed to, but this was urgent! “Hello, how may I help you” said a voice. “Hello, um … there is a giant man-eating lizard on my window, I'm home alone. I live at Green Avenue, house number 306, please come quick!” “Right away mam, please stay calm and hide” said the man. “I will guide you to safety”.

Suddenly another “Thud” came, this time louder. I started panicking. I waited for at least 5 minutes before he came back on the line. “Hello ma'am thank you for waiting …”Crash! the sound of glass shattering filled the room. I sat there as still as a statue. “Ma.a … can … hea … meh?” The lizard had probably broken the router, the connection was breaking.

Suddenly I heard a roar, or hiss, it was both! I don’t know if it was my imagination, but it sounded like a whine. I know the man told me to stay out of its sight but a tiny voice in my heart kept saying “do it! do it!”. So, I lifted the covers off myself to see a tiny egg, the size of a thumb. The giant lizard wrapped its tail around the egg. It was obvious. She was a mother. I felt sorry for her. She had to save herself and her child from the snow. I looked down.

Suddenly I saw the router on the floor. I quietly picked it up. I used the broken pencils to fix in the loose screw and adjust a few buttons. I tried to make a call. “Hello, this is Oreza Animal Reserve, how may I help you?” “Please come to Green Avenue, house number 306, there is a man-eating lizard who just had an egg” “Right away ma’am” he replied.

I sat there watching for 15 minutes. My back was numb because of the snow, but I didn't care. Suddenly there was a tiny “Click” sound. I saw some people come in. I pointed to the lizard with trembling hands. They shot it with a dart. I think one of them noticed my worried expression because she said “she'll be okay, it looks like her egg got laid early”. They put it in a cage and went in the lift.

As they were getting into the lift, my parents just arrived. They came running in and started asking me millions of questions. I took a deep breath and explained everything. After I was done, they both gave me a large bear hug. I was worried for the lizard though. My mom and dad reassured me that the lizard would be OK.

I went back to sleep in my mom’s room as my room was deserted with snow. I didn't go to school the next day although we had rehearsals, because there were a ton of reporters in the lift area.

Obviously someone had seen what had happened and the word had spread around. We watched the news and I was the happiest girl in the world. I saw a picture of the lizard playing with her baby. That picture had turned my frown upside down. I continued watching the news for a while. The baby lizard had been named “Felix” by the Oreza Animal Reserve.