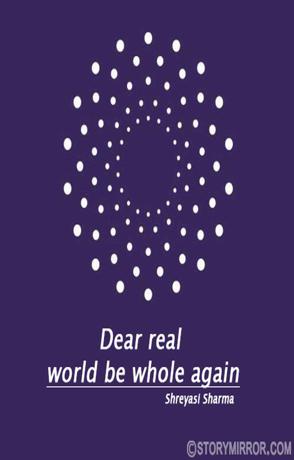 The first thing I learnt in mathematics apart from writing Maths was how to write 1.

“It's just a line. Just draw a freaking line,” my cousin would say. I never understood then, how that 1 number – that dash of a line will help me in fetching marks or get a position in class or even tells tales of violence.

How naturally we understood negative numbers.

I still remember my Math teacher telling us about a cake and how whole that was. That cake you see was my class to me and the moment she sliced it, we all became section - A, B and C.

We were no more natural whole numbers then.

First, we were just points, pointing to huge dreams.

Our fingers counted the stars where are dreams took shape of nebulas.

And, all this time, our hands could not even catch only a few raindrops.

Soon we moved away from being decimals to being real.

Real numbers they called it. Entering into this real world of real people and greater than signs

Was like moving far away from Hogwarts and forgetting all the spells.

In the name of greater common good, I only remember the greatest common factor.

They said irrational and complex numbers under the same breath,

Confusing me to even register an example of the above—a number.

And, when asked about Arundhati Roy, they said, “Not much information is available as she writes complex numbers.”

So after being disintegrated

And measured in percentages,

We were all sieved through complex dimensions.

The board asked us to find the angle which gives the highest degree of torture and nostalgia.

So, we tried all permutations—be it spheres, cylinders, cones,

Only to test the geometry of this generation,

When the whole race was just another circle with in a circle, said the space station.

But nothing postulated the proof

I was confident now that all this is just another spoof.

So as the numerator increased we got differentiated into various streams

Where our continuity was supposed to be examined-

Our continuity to remain divisible,

Because my Math teacher once asked me, “What do you want the world to be?”

She asked me to repeat it.

I have been repeating it up until now,

Because I realized that I was probably saying the wrong spelling after all this time.

When I was saying whole, the universe was probably hearing it as hole.

So now I just say equal to.