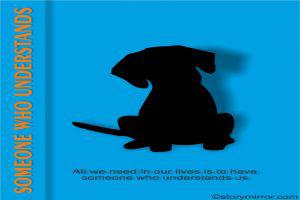 As a little boy passed along the street, he saw that the store owner was tacking a sign on his door that read, “Cute Puppies for Sale.” The boy was excited and asked the store owner, “What cost will I have to pay if I want one?”

The little boy wanted one since long and so he requested the store owner if he could take a look at the little dogs. The store owner smiled and called out for his assistant to show him the puppies. In a while, there were cute little pups that looked like balls of fur. They all almost ran onto the aisle of the store. However, the boy was taken aback when he saw a puppy that limped and lagged behind.

Inquisitive as he got, he asked the store keeper as to what had happened to the limping dog. The man told the boy that this particular puppy was not for sale since he would always limp as it did not have a hip socket.

However, there was a gleam in the little boy’s eyes and something else was going on in his little brain. He seemed to be excited and told the shopkeeper that he wanted the limping puppy. Unable to understand, the store keeper tried to explain to the boy that the puppy would never be able to run and play with him and that it was pointless to spend money on it.

On hearing this, there was a change of emotion on the little boy’s face as if he felt offended about the whole idea. The boy said, “This little fellow is worth every bit of money. He deserves to have every bit of pampering and goodness just like the other puppies.”

After this the little boy rolled up his pants and the storekeeper was shocked to see that the little boy had a crippled leg supported by a brace of metal! The boy looked at the store keeper and said, “I don’t play and run fast myself and this little puppy will at-least have someone who can understand him.”

There were tears in the eyes of the storekeeper and he realised that ‘All we need in our lives is to have someone who understands us’.