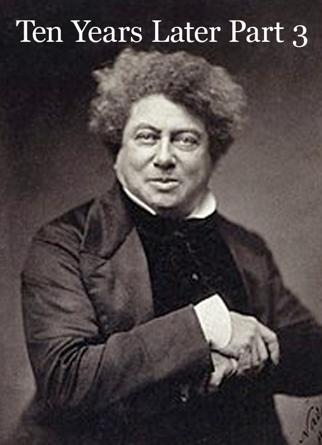 the explosion of maternal anger, and as she divined the cause of it,

she entered the chamber trembling, and perceived the unlucky Malicorne,

whose woeful countenance might have softened or set laughing whoever

observed it coolly. He had promptly intrenched himself behind a large

chair, as if to avoid the first attacks of Madame de Saint-Remy; he had

no hopes of prevailing with words, for she spoke louder than he, and

without stopping; but he reckoned upon the eloquence of his gestures.

The old lady would neither listen to nor see anything; Malicorne had

long been one of her antipathies. But her anger was too great not to

overflow from Malicorne on his accomplice. Montalais had her turn.

“And you, mademoiselle; you may be certain I shall inform madame of what

is going on in the apartment of one of her ladies of honor?”

“Hold your tongue, mademoiselle, and do not uselessly trouble yourself

to intercede for unworthy people; that a young maid of honor like you

should be subjected to a bad example is, certes, a misfortune great

enough; but that you should sanction it by your indulgence is what I

“But in truth,” said Montalais, rebelling again, “I do not know under

what pretense you treat me thus. I am doing no harm, I suppose?”

Saint-Remy, pointing to Malicorne, “is he here to do any good, I ask

“He is neither here for good nor harm, madame; he comes to see me, that

highness shall be informed of it, and she will judge.”

“At all events, I do not see why,” replied Montalais, “it should be

forbidden M. Malicorne to have intentions towards me, if his intentions

“Honorable intentions with such a face!” cried Madame de Saint-Remy.

“I thank you in the name of my face, madame,” said Malicorne.

“Come, my daughter, come,” continued Madame de Saint-Remy; “we will

husband, at the moment when we are all weeping for a master in this

old castle of Blois, the abode of grief, there are people who amuse

“Oh!” cried both the accused, with one voice.

“Well! it is there you are mistaken, madame,” said Montalais, highly

exasperated; “I am no longer a maid of honor, of madame’s at least.”

“Have you given in your resignation, mademoiselle? That is well! I

cannot but applaud such a determination, and I do applaud it.”

“I do not give in my resignation, madame; I take another service,--that

“In the _bourgeoisie_ or in the _robe?_” asked Madame de Saint-Remy,

“Please to learn, madame, that I am not a girl to serve either

_bourgeoises_ or _robines_; and that instead of the miserable court at

which you vegetate, I am going to reside in a court almost royal.”

royal court! What do you think of that, my daughter?”

And she turned towards Mademoiselle de la Valliere, whom she would by

main force have dragged away from Montalais, and who instead of obeying

the impulse of Madame de Saint-Remy, looked first at her mother and then

at Montalais with her beautiful conciliatory eyes.

“I did not say a royal court, madame,” replied Montalais; “because

Madame Henrietta of England, who is about to become the wife of S. A.

R. Monsieur, is not a queen. I said almost royal, and I spoke correctly,

since she will be sister-in-law to the king.”

Madame de Saint-Remy more than the last sentence of Montalais.

“What do you say? of Son Altesse Royale Madame Henrietta?” stammered out

“I say I am going to belong to her household, as maid of honor; that is

“As maid of honor!” cried, at the same time, Madame de Saint-Remy with

her. But, almost immediately recovering herself, she launched a last

projectile at her adversary.

“Oh! oh!” said she; “I have heard of many of these sorts of promises

beforehand, which often lead people to flatter themselves with wild

hopes, and at the last moment, when the time comes to keep the promises,

and have the hopes realized, they are surprised to see the great credit

“Oh! madame, the credit of my protector is incontestable and his

promises are as good as deeds.”

“Oh! _mon Dieu!_ no! it is that gentleman there,” said Montalais,

pointing to Malicorne, who, during this scene, had preserved the most

imperturbable coolness, and the most comic dignity.

“Monsieur!” cried Madame de Saint-Remy, with an explosion of hilarity,

“monsieur is your protector! Is the man whose credit is so powerful, and

whose promises are as good as deeds, Monsieur Malicorne!”

As to Montalais, as her sole reply, she drew the brevet from her pocket,

and showed it to the old lady.

At once all was over. As soon as she had cast a rapid glance over this

fortunate _brevet_, the good lady clasped her hands, an unspeakable

expression of envy and despair contracted her countenance, and she

was obliged to sit down to avoid fainting. Montalais was not malicious

enough to rejoice extravagantly at her victory, or to overwhelm the

conquered enemy, particularly when that enemy was the mother of her

friend; she used then, but did not abuse her triumph. Malicorne was

less generous; he assumed noble _poses_ in his _fauteuil_ and stretched

himself out with a familiarity which, two hours earlier, would have

drawn upon him threats of a caning.

still but half convinced.

“Yes, madame, and through the protection of M. Malicorne, moreover.”

“It is incredible!” repeated the old lady: “is it not incredible,

Louise?” But Louise did not reply; she was sitting, thoughtfully, almost

sad; passing one had over her beautiful brow, she sighed heavily.

“Well, but, monsieur,” said Madame de Saint-Remy, all at once, “how did

“One of my friends.”

proofs of their credit?”

“And may one ask the name of these friends?”

“I did not say I had many friends, madame, I said I had one friend.”

“And that friend is called?”

“_Peste!_ madame, you go too far! When one has a friend as powerful as

mine, we do not publish his name in that fashion, in open day, in order

that he may be stolen from us.”

“You are right, monsieur, to be silent as to that name; for I think it

would be pretty difficult for you to tell it.”

“At all events,” said Montalais, “if the friend does not exist, the

_brevet_ does, and that cuts short the question.”

“Then, I conceive,” said Madame de Saint-Remy, with the gracious smile

of the cat who is going to scratch, “when I found monsieur here just

“He brought you the _brevet_.”

“Exactly, madame; you have guessed rightly.”

“Well, then, nothing can be more moral or proper.”

“And I have been wrong, as it appears, in reproaching you,

“Very wrong, madame; but I am so accustomed to your reproaches, that I

“In that case, let us begone, Louise; we have nothing to do but retire.

“You do not appear to be listening, my child.”

“You bear me no ill-will, at least, Louise?” cried Montalais, pressing

“And why should I, my dear Aure?” replied the girl in a voice soft as a

“_Dame!_” resumed Madame de Saint-Remy; “if she did bear you a little

ill-will, poor girl, she could not be much blamed.”

“And why should she bear me ill-will, good gracious?”

“It appears to me that she is of as good a family, and as pretty as

“Prettier a hundred times, madame--not of a better family; but that does

not tell me why Louise should bear me ill-will.”

Blois, when you are going to shine at Paris?”

“But, madame, it is not I who prevent Louise following me thither; on

the contrary, I should certainly be most happy if she came there.”

“But it appears that M. Malicorne, who is all-powerful at court--”

“Ah! so much the worse, madame,” said Malicorne, “every one for himself

in this poor world.”

“Occupy Madame de Saint-Remy, either in disputing with her, or making

it up with her; I must speak to Louise.” And, at the same time, a soft

pressure of the hand recompensed Malicorne for his future obedience.

said to her friend, throwing one arm around her neck:--

“What is the matter? Tell _me_. Is it true that you would not love me if

I were to shine, as your mother says?”

“Oh, no!” said the young girl, with difficulty restraining her tears;

“on the contrary, I rejoice at your good fortune.”

“Rejoice! why, one would say you are ready to cry!”

“Do people never weep except from envy?”

“Oh! yes, I understand; I am going to Paris and that word Paris recalls

to your mind a certain cavalier--”

“A certain cavalier who formerly lived near Blois, and who now resides

“In truth, I know not what ails me, but I feel stifled.”

“Weep, then, weep, as you cannot give me a smile!”

Louise raised her sweet face, which the tears, rolling down one after

“What shall I confess?”

“What makes you weep; people don’t weep without cause. I am your friend;

whatever you would wish me to do, I will do. Malicorne is more powerful

than you would think. Do you wish to go to Paris?”

“Do you wish to come to Paris?”

“To remain here alone, in this old castle, I who have enjoyed the

delightful habit of listening to your songs, of pressing your hand,

of running about the park with you. Oh! how I shall be _ennuyee!_ how

quickly I shall die!”

“Do you wish to come to Paris?”

“What would you that I should reply?”

“Yes or no; that is not very difficult, I think.”

“Oh! you are very fortunate, Montalais!”

“That is to say you would like to be in my place.”

“Little obstinate thing!” said Montalais; “did ever any one keep her

secrets from her friend thus? But, confess that you would like to come

to Paris; confess that you are dying with the wish to see Raoul again.”

“I cannot confess that.”

“Then you are wrong.”

“Because--do you not see this _brevet?_”

“Well, I would have got you a similar one.”

“Aure, are you telling the truth? Is that possible?”

“Malicorne is there; and what he has done for me, he surely can do for

Malicorne had heard his name pronounced twice; he was delighted

Saint-Remy, and he turned round:--

“What is the question, mademoiselle?”

“It is impossible, is it not, M. Malicorne?” said Louise, with her

“And if Mademoiselle de Montalais asks it at the same time--”

“Mademoiselle de Montalais does not ask it, she requires it.”

“Well! we will endeavor to obey you, mademoiselle.”

“And you will have her named?”

“No evasive answers, Louise de la Valliere shall be maid of honor to

Madame Henrietta within a week.”

“You may take back your _brevet_, Monsieur Malicorne; I will not leave

“That is right. Keep your _brevet_; Mademoiselle de la Valliere shall be

a maid of honor.”

and bounding with pleasure.

are not in love with Raoul.”

Louise blushed like a rose in June, but instead of replying, she ran and

embraced her mother. “Madame,” said she, “do you know that M. Malicorne

is going to have me appointed maid of honor?”

“M. Malicorne is a prince in disguise,” replied the old lady, “he is

“Should you also like to be a maid of honor?” asked Malicorne of Madame

de Saint-Remy. “Whilst I am about it, I might as well get everybody

And upon that he went away, leaving the poor lady quite disconcerted.

goes another note of a thousand lives! but I must get through as well

as I can; my friend Manicamp does nothing for nothing.”