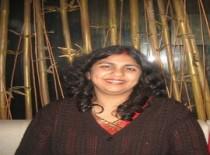 Prakrit woke up in the morning and said "wow". He rubbed his eyes and twitched his nose. He shrugged the sleep off and inhaled deeply.

The familiar woodsy smoky smell of fires being lit up in distant cluster of thatched homes were wafting through the open window, carried by the light breeze. It had rained the previous night and the roses were in full bloom, smelling very sweet and fresh. The air smelled crisp, cool and fresh. Yes it was a definite morning smell. That which comes right before the sun rises, when the ozone is still fresh and not yet choked by the burning fuel that morning traffic would bring in a couple of hours.

He fished out his notebook and pen that were always handy and wrote down his first impression of the morning.  Fresh, ozonic, cool, fresh, sweet, rosy with touches of burnt woody, smokey elements.

That definitely will be the impression he will try to capture when he worked on his air freshener fragrance, he decided , as he got about doing his work in the morning. He even decided that he would call his fragrance "Morning Miracle" so mesmerised he was with the smell of the morning.

Prakrit was a Perfumer. Just like people who paint pictures are called painters and those who write music are called musicians, Prakrit created perfumes and was called a perfumer.

When Prakrit was small, he loved to guess what food his mom was cooking just by the smell. He would smell every new toy before playing with it, every snack item before eating it and even smell his books. He always thought that each book smelled different. The old ones from his grandpa's library smelled musty, warm and well, old and the new books smelled crisp, clean and fresh.

As a student, Prakrit loved Chemistry subject. He enjoyed the experiments his teachers taught him and wondered why certain chemicals smelled like rotten eggs and certain others smelled sweet and like fruits.

He always knew he would be working with fragrances but he had no idea how.

When Prakrit grew up he saw an advertisement with a company who promised to train people to become a nose and that is how he became a perfumer. It took him seven years of training to become a good perfumer.

He learned to smell and differentiate between materials which smelled like lemon, orange, apple or strawberry.

And then he learned how to smell the different flowers, woods, grass and sweet smelling stuff.

One day, Prakrit went to the flower market in Madurai to smell different kinds of flowers.

When he came back to his workplace, he made a lovely perfume that smelled like a bouquet of fresh flowers. He added some red roses and freshly bloomed jasmines, then a touch of the sweet smelling tuberose and lots and lots of lily flower and marigold blossoms. He smelled the scented oil and he felt there was something missing.

"Ah, I think I should add something that smells like the green stems and leaves of the plant. Then only the perfume will smell like a bouquet of flowers."

As he was adding touches of green leafy notes, he remembered the yellow champa flowers that women put in their hair and how heady and sweet the flowers smelled as the women walked past him. He added a drop of champa essence and voila, his perfume was ready!

One Monday morning, Prakrit woke up lost in thought. He had an inspiration the previous night when he had gone to a party and he wanted to create the perfume as soon as possible. He hardly noticed what he was eating and was thinking very deeply about his creation.

As he drove to work, he made mental notes of what he had smelled in the party that had inspired him. He remembered the dessert platter that everyone had loved. There were warm gooey brownies and huge slices of chocolate truffle cake. There was a bowl of Creme brûlée with vanilla essence and a thin glassy layer of crunchy caramel that he had to crack with his spoon. He had a sweetness overload. In-fact to neutralise the effect, he had taken a ginger orange sorbet and that had given him an idea. He wanted to create a delicious fragrance that smelled of vanilla and sweet with chocolate and caramel and touches of orange candy and spice to give it an edge.

When he reached office, he eagerly took his tool kit of accords which are fragrance mixes just like colours of a painter's palette.

But to his dismay, he could not smell any of the materials.

"Alas, I have become anosmic. My sense of smell has gone." Prakrit cried in frustration.

And he fretted and complained again and again and as he was doing that, he felt a little tickle in his nose. He sniffed a little and as he did so, a giant sneeze burst out of him, scaring his friends and colleagues.

Prakrit had been so engrossed in his idea of the new perfume that he had not realised that he had a cold. And that is why he had not been able to differentiate whether he was eating a radish or an apple in the morning.

Prakrit chuckled to himself and went back home. He could take a holiday and rest because if his nose did not work, he could not work at all.

His creation could wait another day to get created after all!