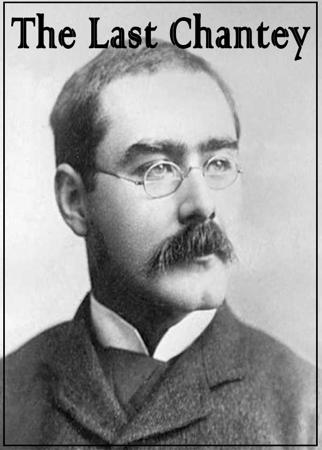 Thus said The Lord in the Vault above the Cherubim

Calling to the Angels and the Souls in their degree:

"Lo! Earth has passed away

On the smoke of Judgment Day.

That Our word may be established shall We gather up the sea?"

Loud sang the souls of the jolly, jolly mariners:

"Plague upon the hurricane that made us furl and flee!

But the war is done between us,

In the deep the Lord hath seen us --

Our bones we'll leave the barracout', and God may sink the sea!"

Then said the soul of Judas that betray]\ed Him:

"Lord, hast Thou forgotten Thy covenant with me?

How once a year I go

To cool me on the floe?

And Ye take my day of mercy if Ye take away the sea!"

Then said the soul of the Angel of the Off-shore Wind:

(He that bits the thunder when the bull-mouthed breakers flee):

"I have watch and ward to keep

O'er Thy wonders on the deep,

And Ye take mine honour from me if Ye take away the sea!"

Loud sang the souls of the jolly, jolly mariners:

"Nay, but we were angry, and a hasty folk are we!

If we worked the ship together

Till she foundered in foul weather,

Are we babes that we should clamour for a vengeance on the sea?"

Then said the souls of the slaves that men threw overboard:

"Kennelled in the picaroon a weary band were we;

But Thy arm was strong to save,

And it touched us on the wave,

And we drowsed the long tides idle till Thy Trumpets tore the sea."

Then cried the soul of the stout Apostle Paul to God:

"Once we frapped a ship, and she laboured woundily.

There were fourteen score of these,

And they blessed Thee on their knees,

When they learned Thy Grace and Glory under Malta by the sea!"

Loud sang the souls of the jolly, jolly mariners,

Plucking at their harps, and they plucked unhandily:

"Our thumbs are rough and tarred,

And the tune is something hard --

May we lift a Deep-sea Chantey such as seamen use at sea?"

Then said the souls of the gentlemen-adventurers --

Fettered wrist to bar all for red iniquity:

"Ho, we revel in our chains

O'er the sorrow that was Spain's;

Heave or sink it, leave or drink it, we were masters of the sea!"

(He that led the flinching in the fleets of fair Dundee):

"Oh, the ice-blink white and near,

And the bowhead breaching clear!

Will Ye whelm them all for wantonness that wallow in the sea?"

Loud sang the souls of the jolly, jolly mariners,

Crying: "Under Heaven, here is neither lead nor lee!

Must we sing for evermore

On the windless, glassy floor?

Take back your golden fiddles and we'll beat to open sea!"

Then stooped the Lord, and He called the good sea up to Him,

And 'stablished his borders unto all eternity,

That such as have no pleasure

For to praise the Lord by measure,

They may enter into galleons and serve Him on the sea.

Sun, wind, and cloud shall fail not from the face of it,

And the ships shall go abroad

To the Glory of the Lord

Who heard the silly sailor-folk and gave them back their sea!