There are so many talks about Millenials and people born in the '90s and has always been a caricature of how things should be! I agree to the point but now when I stand in the middle as I mentioned in the title, it is my responsibility to tell why do I feel that I have been the luckiest to be born in the late '90s.

Let's see it through a glass of a small child who was still in awe of television which was broadcasting the amazing " Children" show and that too at the prime time. Equal importance was given to the fantasy genre keeping in mind the ever-growing children population. Sonpari was the ultimate helping aunt. The magic pencil was the dream of every school going. Shring bhring sarvaling is still in the head. No one could take the horror of sshhhh....koi hai!!. If the '90s had Shaktiman then we had Hatim. The theme of Hatim still gives goosebumps!! With the likes of Khichdi and Sarabhai Vs Sarabhai(.. Which was ahead of its time) had mass and the class!!

Mobile phones were still not common. In fact, landlines were prevalent. A middle-class household like mine had only a single mobile that too was my father's. The best part was, it never intrigued us. We were busy with our own toy phone with Chayya chayya and Dhoom machale recorded in it. Later we shifted the focus to those thick remote like games/video games.

Then the time of big computers fascinated us. Few of our relatives had them but the only thing to do was to play in it! Still, the real-time was more than reel time. A lot many outdoor games were made to fit the circumstances and the rules which would change conveniently. I spy, pakdam pakdai , oonch- neech( those who don't know, it was exactly what it sounds in a positive way), barf-pani( Ice -water) and again a lot more. A lot of you must have others as well because they were countless. Even the festivals were more worthy. We waited for Diwali or Holi and enjoyed them. It was not a photoshoot affair only. The focus was more on the real fun. With time, things have changed and not for good. There is not so much desire to be there but to just stay home and binge-watch or just chatting on phone.

With time, we all grew and must be in late teens and early '20s. Now when I look back I feel fortunate to have seen the transformation of everything. I saw the gradual usage of mobile in front of me. I feel lucky that the internet and mobile did not play too much at our times. All these social networking sites came when we already had passed the important years and had the wisdom to use it. We know how life was without all of this and things were not haywire like today.

Even the television has regressed so much. When literally there is no importance being given to the children. I might offend somebody but Baalveer kind of shows are there only or maybe the only one on prime time(... which is not my choice at all) . Forget about a 10 or 12 yr old, even a 3 yr old is addicted to the phone now. Everything and anything is available on the internet which has its pros and cons. Childhood is just reduced to a few years. Children are losing their childhood so early on that they need not wait for the right age to come. I don't understand why losing innocence before age is a trend or fashion among these kids(.... sounds like I'm too old, no I'm not). There is no point in exceeding your age. It's a foolish act to elderly.

We are the people who have seen both the lives and know the difference. Neither were we vintage nor are we OTT( deliberately used). Do not run behind maturity if you are not. So what if you won't play the latest game or not watch the latest series and bla bla. These things can be done at the right time but " the moment" can't be relived. Focus on real learnings and make real memories. Cling to childhood as long as you can and you should. 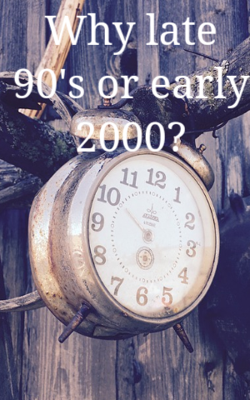