Finally, at the end of the day, I finished the task, mailed the data to the team lead and took a sigh of relief. After relaxing a bit, I realized that it was time to go home; so I started collecting my things to leave for the day; but that’s when Soham came to my desk and asked me for the coffee, “Veda, are you done for the day?”

“Oh, nothing; I just wanted to ask, would you like to have a cup of coffee with me?” he said it and I raised my eyebrows at him; he noticed that and with sudden realization he said, “Oh…no, don’t get me wrong, I am not asking you for the Date, it’s just that I need coffee right now, and I won’t mind a friendly company, that’s it, so will you join me?”

After this hectic day, I was also craving for the coffee, so I agreed to his request but, “If that’s the case then, I’ll agree on one condition.”

“I’ll pay for both of us” I said it to return the favor of sandwich; he understood it and he was about to argue, but in the next moment he agreed; maybe he knew that arguing with me was waste of time. So in the end together we went to the office canteen, ordered coffee and were waiting for the coffee while sitting across the nearby table.

Silence in between us was growing awkward so to break it I said, “Soham, Why were you that eager to help me? I mean I am new here, and we are complete strangers to each other, still, you took that much effort just to feed me that sandwich! Why?”

“Honestly, I also don’t know, I just felt like you need a friend, and there is something about you that reminds me of someone, so I was unable to resist the urge to help you.”  With softness in his eyes, he was looking at me, and that’s when our coffee arrived.

Taking a sip from the cup of coffee a wonderful idea strike in my mind and smirking a little I said, “Well, Soham as you say, if we are friends then we should get to know each other more, right?”

“I agree to the thought, but I don’t understand what are you implying at?” he replied.

“Let’s play a game, 20…no, 5 questions? We will ask each other a question and other should answer it honestly, what say?” Excitedly I asked.

“Umm, I don’t have anything to hide, so okay; but I’ll ask the 1st question.”

“Ok, I don’t mind, go ahead.” Excitedly I replied but I didn’t know that it was going to backfire on me, until Soham asked me the 1st question, “So Veda, tell me your current relationship status, are you single?” I gave him a weird look after hearing the question and that’s when he said “What? Don’t give me that look, this is your game and you should answer the question honestly.”

“I know the rules, okay, and for your information, yes I am Single. Happy now, now it’s my turn, so Mr. Soham my question to you is, how many relationships you have been in to?” He chocked his coffee after hearing my question, and then smiling a little he said, “You are playing my game now, Okay I’ll give you the honest answer, so, including childhood relationship, there were 3 in total. One was back in college which was just an infatuation and other was recent, we both came to the conclusion that we have different paths to follow, so we broke the things on good terms.”

“And what about childhood one?” Curiously I asked him about his childhood relationship.

“Curious, but for your kind information Ms. Veda it is my turn to ask the question and I want you to answer the same question for me.”

I was totally embarrassed, and to hide it I put my hands on my face; “You can’t hide your face forever Veda, you have to answer the question honestly.”

“Fine, So I have never been in a relationship ok!”

“What are you serious, how is this possible?” Surprised by my answer he replied.

“Hold on your horses Mr. because now it is my turn, and I want to know about your childhood relationship.” By finishing the last sip of my coffee, I replied.

A characteristic smile appeared on Soham’s face, “Actually we were neighbors, and were in the same school, she was younger than me but we used to go to school together; one day, while we were returning from the school I asked her if she can be my girlfriend and she said yes, I got so excited that I kissed her on the cheek and she ran away. After that, I don’t know what happened, but I have not seen her since then. That’s it.”

I was stunned for the moment, Soham snapped his fingers in front of me to bring me back to the reality, “Hello, what happened? You zoned out.”

“Oh sorry, I was just thinking something; and that reminded me I had to go, we will continue this game tomorrow, I promise.” Somehow I manage to say this, took my bag, and was about to leave; when Soham stopped me, “Hey wait, I won’t ask you for the phone number but at least give me your Social Media Id before you go.”

I just gave him my Id and immediately he sent me a request, which I accepted and was about to leave but a sudden wave realization washed over me when I saw one of my childhood photos which I recently uploaded on social media. I immediately turned around and was intently looking at Soham when he said, “Oh, these photos are nice, wait…”

I just turned around, smiled and made my way towards the exit but before making it to the Door, I heard Soham yelling, “Wait Veda, Don’t run away again…..”

‘So that’s how we met again, but don’t worry this is not the end, this is just the beginning!’ 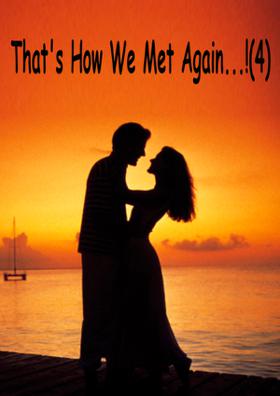