Sequel To Somewhere Up There

Sequel To Somewhere Up There

Placing her hands over the architrave of her door as high as she could, Izhaiyini took in some air. As she pushed it out of her lungs, she became aware of how irregular her breathing was. It was not the regular breathe-in-breathe-out, but was more of a breathe-in-break-breathe a little-out-break-breathe a little bit more-out-and finally, breathe out. Like every single time she had these tiny moments of realisations of how many times she had blinked or how many times her heart had thumped against her chest, this time too, she was filled with a sudden heaviness in her heart that came and left almost as soon as it had come. She closed her eyes as though closing herself from feeling anything and began walking.

Her son. It had been a monotonous few days, how many days exactly she couldn’t remember or even care to count. Finding the little monster was not a tedious task. She knew where he would be like she did on other days, days when Father spent a good three hours with Kathir lying down on the verdant grass in their large garden, days when Father was still there. She always thought that he was omnipresent ever since she was a little girl.

She remembered the feeling of sudden pangs of fear that filled her when Father suddenly entered the room in which she sat painting. She knew she wasn’t doing anything wrong, she was only painting, but what was he to think of it? Parents had their way of misunderstanding things that shouldn’t be misunderstood and misinterpreting things that shouldn’t be misinterpreted. That fear was something that she carried with her for as long as she could remember. Along with it came the feeling of his omnipresence. He was always there. When she was painting when she was supposed to be sleeping, he’d pop out of nowhere and she’d be subject to a glare that sent shivers down her spine. When she was trying to slip into the neighbour’s house to watch on their Television forgetting her homework, he’d pop out of nowhere and she’d have to return home. Today, she wanted to feel his omnipresence, and this want was more than a want, it was an overwhelming desire.

She put aside any thoughts of her father when she noticed a small body lying supine on the grass beneath. She tried to remain unmindful of the fact that she had not noticed him lying there only until she walked up this close. Kathir turned around. She noticed his little eyes look up at her, his eyebrows slightly lifted up and he looked as though she had interrupted him. His face showed a slight sense of surprise at seeing her and she couldn’t help but smile at this angel child.

"Where’s a grandfather?" he asked. "I need to tell him about the girl with pink hair."

"Somewhere up there." She said looking up at the sky, lovingly as though all her hopes hovered along with the clouds, as though Father was really there looking down upon her.

"Harish's mom did tell me that. I really wish he comes back soon. There's a lot I need to tell him." Kathir implied.

"Well," she said, sitting down and shifting uncomfortably. "I suppose you'll have to tell me about the girl with pink hair."

“Oh,” he said blankly clearly not content with her offer. “Well, this girl ended up to school in pink hair. She apparently had it coloured in some parlaar or parlayr , something of that sort.”

“My class teacher was not happy,” he added after she hadn’t said anything.

“I’ve always been scared of colouring my hair,” she said trying to contribute something into the conversation.

“Why?” he asked blinking softly a few times as he looked out at the sky, the white masses of cotton hovering above them.

“When I was a little girl, I never knew people could colour their hair,” she replied blankly. “When I grew up to be almost the age I am today, it scared me because I didn’t want to ruin my hair.”

“Oh,” Kathir said, suddenly drawn into the conversation. “Colouring your hair spoils it?”

“Yes it does,” she said as-a-matter-of-factly. “Too much of anything is not good.”

“Grandfather says that too.”

At the mere mention of her father, her stomach clenched uneasily and her chest felt heavy once more.

“Says what?” she said trying her best not to bring in any emotion of what she felt into her voice.

“That colouring your hair spoils it?”

“No, Amma, of course not,” Kathir said and Izhaiyini could’ve sworn that she just saw her son roll his eyes at her. “He keeps telling me that too much of anything is not good.”

“Of course, he does,” she muttered. She turned to glance at her son, surprised at seeing no scornful reply from him at the comment she had made. His back was turned toward her and he was leaning down at the ground his eyes fixed at something amidst the grass.

Izhayini crawled a little to reach his level and noticed him staring at a caterpillar making its way through the grass. That reminded her –

“Have you finished that painting you were making?” she asked him.

“The one with butterflies and caterpillars on a tree?” she tried again.

“You didn’t show me,” she said trying to sound offended. Even if she had managed to sound offended it hadn’t brought his attention back to her because he was still busy playing with the caterpillar. A moment later she decided to let him explore and made a mental note to ask him during dinner.

“It doesn’t look that great,” he said sitting back next to her. “The caterpillars look like squiggles. I tried making them look real but it didn’t really work.”

“Don’t be so negative,” she said trying to soothe him not sure if she was the one needing soothing at the moment or him.

“I am not,” he said his voice sounding a few years older. “It doesn’t matter how it ends up looking. All that matters to me is the painting I did and the fun I had doing it. How it turns out doesn’t matter that much.”

She paused. The exact words of Father. She lifted her head and looked at her son. He looked the same, the little boy he had been. Eyes little and skin soft even to look at. Young and unlined. She was stupid enough to hope to see Father sitting beside her.

“It still looks bad though,” he said and chuckled to himself as he stood up. “I want to catch that caterpillar and put it in a jar.”

“And?” she said, still not taking in his last few sentences.

“And let it free after I’ve caught it,” he said and picked up a twig and ran after the caterpillar.

Again, the same words. She smiled. A real smile. A smile that probably reached her eyes because she could feel herself smile, not just her lips but also every inch of her skin and being. “

“Father is here,” she whispered to herself. He is here, omnipresent. He will always be.” 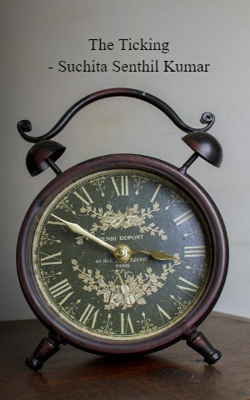 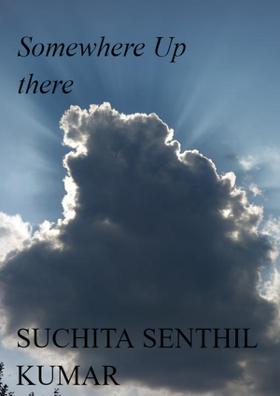