When travel is within your radar and the Lord of 7 hills summons you, then the itinerary is bound to be a soul-fulfilling one.

Praneetha our tour planner offered me a travel plan to Tirupati. It was a benison of a favour laced with deja-vu-flavour.

She’d booked tickets for both of us online in advance for the Seegra darshan.

Another friend of Praneetha, Sarala was also part of this divine itinerary.

We all agreed to meet at Tirupathi.

When life offers you a travel in solitude, grab a back-pack and revel in the exultation of the sojourn.

With adrenaline peaking and breaking free from life’s rigmarole, I surrendered myself to the treat of the escapade with wings of fancy.

Sapthagiri express bound for Tirupathi was on platform no.11. I perched on my reserved seat, only to realize that the 3 seater meant for 3 persons could barely accommodate 2 members. The fortune that floundered in my favour positioned me in the middle seat.

All my excitement fizzled out in seconds, given the travails of a sandwiched cruise.

I prayed yedu kondala vadu ( Tirumala God) fervently for a changeover from middle to the window seat. As I loved to be an onlooker seated by the window.

My face donned a frowned contour to settle in this cramped space. My co-passenger a young guy occupied the window seat shortly.

I gnashed my teeth for not being offered a window slot. After all a 4-hour train journey couldn’t entitle me to a happy travel.

I didn’t intend to puncture my ego by requesting the guy for the same.

In a fit of rage, I pulled out my mobile and thumbed my fingers eerily to jot my share of ordeal. I cursed the railways for their inadequacies. The time was 6 past 12 minutes in the morning. I was pretty sure my friends would wake up to my fresh morning dose of rants and ramblings.

A 4 hour journey of inconvenience?

I had a soliloquy with Lord Venkateswara. — What was the need for you test me this way?

Hardship right from its initiation?

Pray tell me why?

It’s you who summoned me. It was time for my next co-passenger to occupy the seat. They arrived in such huge numbers that one could easily discern the merits of a typical joint family. A complete family tree was seen settling in the compartment.

A young lady occupied the seat next to me.

Her father approached my window co- passenger and requested him to shift to another place, so that the young lady and her spouse could be seated together.

Lo and behold. The old man’s command was well executed by the young chap.

He left and I swapped to the window slot in a jiffy. There was a nod in the affirmative by the young lady next to me.

My stalled spirits soared to startled spirits and forged back into the fire of travel.

My prayers were answered.

I thanked HIM profusely for HIS benevolent act. Could I have bargained for more? The train began its journey at 6:25 and the next 4 hours was a fleeting time. It was 10:20 am. Sapthagiri Express terminated at Tirupati station.

The skyline above me was perked with dark clouds ready to burst impulsively. Fortunately, chillness percolated the environs of Tirupati indicative of a cool climate.

I alighted at the terminal and walked my way to Bheema’s hotel, where Praneetha greeted me and introduced me to her friend Sarala. We exchanged pleasantries and devoured the first eats for the day packed with piping hot idlis to the accompaniments of sambar and white chutney.

In Sarala, I could sense all the friendly vibes that enthused us all through the journey. Having refreshed ourselves at our dorm, we set out to the Shrine of Tirumala, uphill. It was a distance of 22 kms. And Sarala entrusted upon herself the arduous feet commute to Tirumala.

We spotted a cab driver who agreed to drop us at our divine destination. We dropped off Sarala at Alipiri entrance from where she set her foot on task. And we continued the rest of commute by cab. There was a security check at the entrance. We were cleared within 20 minutes.

The path was filled with verdant greenery on either sides of the road. Flora in full bloom, splashed in brilliant shades of pink and orange. The path was spic and span reflecting the efficient administration of TTD. We stopped over for some clicks and headed to our destination after having crossed at least 27 u- pin bends approximately.

Once at the hill, we settled the cab driver’s bill and saved his contact for the descent.

A divine hill synonymous with the jargon ‘jaragandi’ and heralded as one of the ancient, busiest and wealthiest temples, Tirumala is one of the most sought after divine destinations.

Lord Venkateshwara is its presiding deity.

The holy shrine of Tirumala is said to attract a sea of humanity for the Lord’s darshan.

It is believed that only if the lord summons his devotees, people get the golden opportunity to visit him.

The aura of the temple soaked you in its sublime divinity. The whole place reverberated with chants of Govinda — Govinda. Installations of big screen projections and TVs showcased the temple’s Sevas periodically.

HIS abode is considered to be the ‘Kaliyuga Vaikuntam’. The seven hills represent the seven hoods of serpent Adisesha.

Our darshan was slated for 3pm. It’s a noted tradition to first visit Varahaswamy temple at the entrance before visiting the main deity. There was a long winding queue.

Suddenly our mobiles began ringing. When Praneetha answered her call amidst the chaotic signals, It was Sarala who expressed her anguish. She was distraught about the fact, that the Sudarshana tickets were called off for the day and there was no chance for her to have Lord’s Darshan.

But the ever generous Praneetha plunged into swift action by calling a board member of TTD and managed to arrange a seegra darshan ticket (albeit at a higher rate. but what mattered most was the elusive darshan) for Sarala with just phone — calls. She also forwarded a copy of Sarala’s aadhar card.

Such was Praneetha’s synergy and helping attitude that demanded encomium.

The upbeat mood of Sarala was quite palpable in her tone on the phone and she was full of gratitude for her loving companion. I remained a mute spectator watching in awe!

We renewed the spirit of our Varahaswamy temple visit, had his darshan after a 22 minute long wait amidst the crazy pilgrims.

Our restless hunger pangs began signalling for the next eats of the day. We satiated our appetite at Annamayya restaurant and hired a jeep to the seegra darshan gate that led us to a long serpentine queue. There was a secutiy check at the entrance which we cleared for a second time and deposited our mobiles at their respective counters.

We were treated to a repeated hollering of ‘Govinda’ — ‘hari’- ‘Govinda’, Venkataramana Govinda, followed by recurrent episodes of pushing and jostling into the various chambers. Our energy levels was almost sapped, given the frenzied crowd. We had to brave all odds in this unforgiving terrain where humans lost empathy for one another.

Though the volunteers discharged their duties impeccably, the crowd was boisterous. The queue led us to a cell, where we could get to plonk on the staircase haphazardly. The ambience here was chill enough to provide us with the much-needed breather.

Having offloaded our gravity of fatigue to some extent here, we embarked on the rest of the ‘pushing- progression’.

The time clocked 4:55 in the evening and we were into the final leg of the visit, where all the other queues from other entrances also merged.

We were literally thrust into the sanctum sanctorum.

Voila! We got the surreal and enriching vision of the lord of seven hills — lord Venkateshwara. It was an enriching life experience for split seconds.

It was that one glimpse for which we had waited for hours and underwent all the rigours of jostling. But the lord’s darshan infused us with all the positive energy.

It was a magnificent glimpse that served as a panacea for the ruffled souls.

This special darshan changed the demeanour of the pining devotees with bushels of cheers.

That one glance cemented the attraction with the lord for a re-visit.

It has to be personally seen to be believed, as words are insignificant to unravel its grandeur.

The influx of devotees at Tirumala is a seemingly perpetual ritual. The power of its sanctity lends a touch of cosmic paradise on earth, such is its magnificence.

Creeping through the stifling crowd with rants in bounty and exuding frustrations is a regular proposition here.

God puts us through many tests in our quest for HIS search and how we overcome the painful pleasure is a challenge per se. But it’s all worth, for the sense of satisfaction and peace you encounter in the end.

With complacency writ large on our faces, both Praneetha and myself emerged out of the sanctorum. We also visited Yoga Narsimhar temple and Anjaneya temple and offered our prayers.

Now it was time to grab that unique grub popular in Tirumala for its distinct flavour and taste. The inimitable and lip-smacking laddoos.

The whole path that led us to the laddoo counter was filled with the heady aroma of freshly melted ghee, cardamom and fried cashews.

While I bought the covers from the cover counter, Praneetha brought the laddoos.

Later, we fetched our slippers and the mobiles and waited at the exit for Sarala.

Sarala was done with her arduous foot voyage and had the darshan of Lord Venkateswara.

She was obviously elated and her excitement hit the roof. Her mission of visualizing the lord was complete because of Praneetha’s timely help.

We called the cab driver for the descent to Tirupathi.

And resigned for the day! 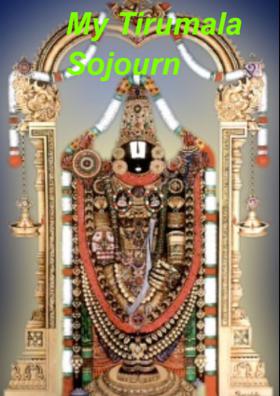