Bengaluru's whitefield area and the innumerable MNCs thriving there. Many graduates, post graduates, and experienced professional come to this area to enhance their career. This is the story of Tara and Abhimanyu who were in the same company, but in different departments. He was a Senior System engineer and she was the head HR manager. The only interaction they had was in an HR meet, or activity, and Abhimanyu was called personally in her cabin to discuss about his appraisal, and performance.

It was at one of those occasions when a team activity was organized and different teams had to perform a set of tasks, which were a part of the solving of a puzzle. The one who could do it first, was the winner. The team in which Abhimanyu was a member, was the winner, but not accepted so, due to some clash with the prescribed rules. But Abhimanyu was adamant and took the matter to Tara, who, on hearing his agitated voice, asked him to leave the room at once. This agitated him even more. As he went back to his desk, he received a message on internal chat portal. It was by Tara. The message stated-

"Meet me at Pablo's cafe around 8 pm tonight."

Abhimanyu was still in an annoyed state but Tara was as poised as she is known to be. She politely greeted her as if nothing had happened. That gesture somehow cooled him down, though the issue was not yet close. He was about to talk about the morning incident, she smiled and called the waiter, and asked Abhimanyu, what will he have. He said coffee. That's it. She ordered by herself for him too. He was taken aback by this act of hers.

She looked at him with an angelic smile, and there was something in it, that pacified him every time. Still, he manages to talk about the issue, now in a mellow tone. And while explaining the incident he himself realized how stupidly he had behaved and been this way the entire day. He started giggling. She accompanied him in the jest. Both had a good time together, and became friends. They started interacting more over messages, calls, and started meeting in office breaks, and after office too. Soon this interaction bloomed into love. But, as always when love awakens, it does not wake up alone, it brings along with a series of problems to deal with. Tara was a Muslim, and Abhimanyu was a brahmin. Both were of marriageable age, well settled, and more importantly loved and respected each other.

The parents of both, Tara, and Abhimanyu, were strict and orthodox. Making the realization of marriage a distant dream, and more of a nightmare as convincing them will involve drama, infact melodrama, allegations, accusations, and even more, which history has shown time, and again. Making everything sour, and eventually forcing them to go to a point that they have to do away with the relationship, and part ways.

They thought about this and came with a plan.

Tara's father, after his retirement from the agricultural deptt, opened an NGO for the destitutes, be it the kids, the women, or the aged. He taught them to grow vegetables for themselves and a large part of the NGO premises was used to grow vegetables. It was originally their ancestral home, located in the Nagarbhavi area of Bengaluru, near the famous national law university. His son, Aamir, happily married, found a job in the middle east, and settled there. But he has filed a case against his father, to give him a share of the property and is using all illicit means to make sure that the NGO shuts down. He was disheartened by his son's selfishness. Tara did not want to add to his tension.

Abhimanyu's mother was ailing and bedridden due to the shock she received at the loss of her husband being shot dead by the goons while they were returning from a party. She survived the injuries but not the trauma. More than medical aid she required love, affection, care, and someone to be by her side.

Knowing about each other's family situation they decided to help each other's family, and in the meanwhile Tara was reading about hindu marriage, and the 7 vows. She was in tears reading them. She said we will abide by each of the vows before we marry. Saying this she read the first vow aloud-

"It is a prayer to the almighty to provide us nourishment. The wife will ensure she provides a pure and healthy food to the family, and the husband will take care of the family in terms of protection and strength, and both will be at par in holding these responsibilities."

She smiled at him with teary eyes, and he hugged her back.

They started their mission of winning the families' hearts by abiding by these vows.

Abhimanyu visited Tara's house, met her father, and started helping him in the NGO on the weekends. He was gradually loved by all in the NGO except his father, who was a bit strict and reserved. Abhimanyu was patient.

Tara visited Abhimanyu's house, visited his mother, and started taking care of her every weekend by cooking for her, showing her movies, taking her on wheelchair to the park.

This continued for a while. 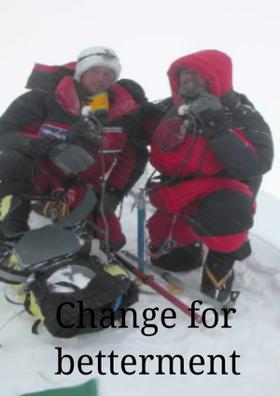