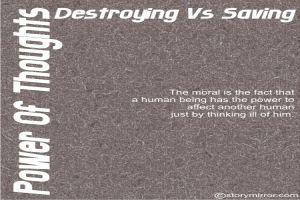 Power Of Thoughts- Destroying Vs Saving
★★★★★ 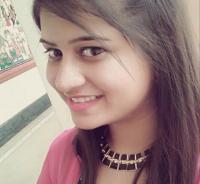 Once upon a time, a woodcutter arrived in a wealthy kingdom. The land was ruled by a generous and loved emperor. The woodcutter had brought with himself a huge stack of sandalwood that he aimed to sell. There had been an announcement that if and when the King dies, sandalwood would be used to make his pyre. Usually, people didn't buy much of sandalwood because it was expensive, so the woodcutter started hoping that the King dies soon. He prayed every day that the king should die so that he can sell his wood and make money.

Meanwhile, in the palace, the King was taken severely sick. So, the King ordered his nobles to inform the citizens that he was sick and may not survive. The people were devastated upon hearing the news. The word spread and came to the ears of the woodcutter. He was happy but felt a little void in himself for causing trouble to so many people because he believed that it was because of his wish that the king was on his death-bed. Although he felt a little evil, yet he was happy about the upcoming opportunity to earn money.

However, there came a hurdle in his success in the form of a tax. He was told that he had to pay a tax as he was a foreign seller and the amount of tax was high because the King focused on exports and charged the imports heavily. He had only sold a few bundles from his stack, but the amount due to be submitted was very high. On breaking the law or escaping the tax liability he would be prosecuted and sent to serve a lifetime sentence.

He shared his worry with a local woodcutter. He told him that the King was kind at heart. If requested, he might relax his tax burden. The woodcutter was ashamed of his evil thoughts yet he decided to accept his advice.

The next day, the woodcutter went to the palace but was denied any help as he wasn’t allowed to meet the sick King was and the nobles didn't think that the tax burden on him was too high. Although he was denied any relaxation in his tax amount, yet the time for payment was relaxed and he was given an extension of 10 days to pay the tax. He went back to his friend and narrated the details of his visit to the palace. His friend sympathized with him and told him that had the King been well, he would have relaxed his tax amount, for the generous being he was. After a little chat, he walked back home with a guilty conscience.

Once he reached his rented cottage, he asked for forgiveness from the almighty for being so selfish. He was having a difficult time, but he decided to be strong and went out again to sell his wood, as much as he could.

Three days passed. He hadn't sold much. However, he never forgot to say a prayer for the King's well-being. Later one day, he went to see his friend. The locals told him that a renowned saint had come to cure the King with his knowledge of medicines. There were chances that the King would be able to take up the reign again. He was happy beyond measure on hearing the news. He went home with a happy face and prayed for the King's good health.

On the next day, he heard an announcement. The saint who had come to cure the King needed some medicinal herb namely Neem, Nilgiri (Eucalyptus) and Chandan (Sandal). Anyone who would provide them would be heavily rewarded when the King regains health. He was amazed at the turn of events and said a quick prayer for the King's health before going out. As soon as he informed the king’s men that he had sandalwood, he was out of stock. All the stacks of sandal that he had were taken away by the King's men and used to cure the King. He had decided that he would ask for relaxation of his tax burden as a reward.

Soon, the king regained health and addressed the public. A wave of relief passed through the kingdom. Now, it was time for rewarding the woodcutter. He was called upon by the king. When asked about what he wanted, he replied what he had decided earlier. The king was surprised at his honesty. He asked him the reason behind his demand and the woodcutter narrated the whole story. The king, impressed by his demand and his honesty rewarded him with a bag of gold over and above the huge sum in exchange for the sandalwood. He had enough money to pay his taxes and to stay in that city for a lifetime. The king offered him a job in his court which he graciously accepted. That day, he went back to his cottage and thought about the bizarre happenings of his days in the city. He realized that his wish to harm someone had landed him in a trouble whereas the opposite got him what he needed.

Did you guess the moral?

No, it's not about the 'Law of Attraction', (i.e. if you want something to happen wholeheartedly, it will happen). The moral is the fact that a human being has the power to affect another human just by thinking ill of him. The King had nothing to do with the woodcutter, he didn't even know him, yet the power of his negative thinking affected him severely.

It raises a question as to why did he do that? Just to sell his wood? Does that even make sense? Is praying for a person's death just to sell your merchandise justified? I hope you’ll agree that such money can never bring happiness in anybody’s life. On similar lines, we can deduce that the underworld dons, corrupt politicians, corporates or even individuals who earn money in exchange of someone's blood, live a life that is always under death threat and hence neither joyous nor peaceful.

Power Of Thoughts- Destroying Vs Saving