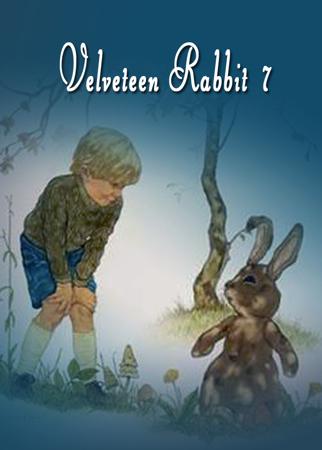 But the little Rabbit sat quite still for a moment and never moved. For when he saw all the wild rabbits dancing around him he suddenly remembered about his hind legs, and he didn’t want them to see that he was made all in one piece. He did not know that when the Fairy kissed him that last time she had changed him altogether. And he might have sat there a long time, too shy to move, if just then something hadn’t tickled his nose, and before he thought what he was doing he lifted his hind toe to scratch it.

And he found that he actually had hind legs! Instead of dingy velveteen he had brown fur, soft and shiny, his ears twitched by themselves, and his whiskers were so long that they brushed the grass. He gave one leap and the joy of using those hind legs was so great that he went springing about the turf on them, jumping sideways and whirling round as the others did, and he grew so excited that when at last he did stop to look for the Fairy she had gone.

He was a Real Rabbit at last, at home with the other rabbits.

Autumn passed and Winter, and in the Spring, when the days grew warm and sunny, the Boy went out to play in the wood behind the house. And while he was playing, two rabbits crept out from the bracken and peeped at him. One of them was brown all over, but the other had strange markings under his fur, as though long ago he had been spotted, and the spots still showed through. And about his little soft nose and his round black eyes there was something familiar, so that the Boy thought to himself:

“Why, he looks just like my old Bunny that was lost when I had scarlet fever!”

But he never knew that it really was his own Bunny, come back to look at the child who had first helped him to be Real.