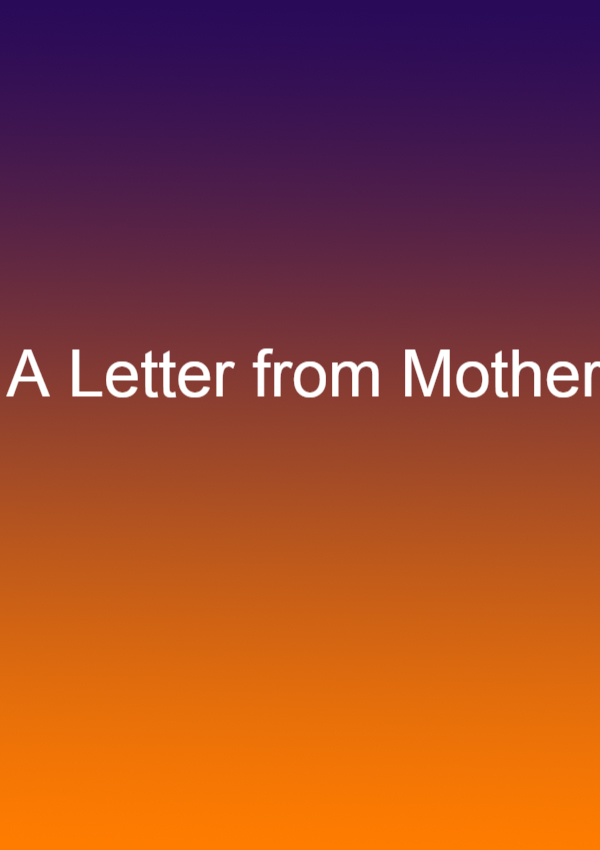 A Letter From Mother

A Letter From Mother

Aditya just came from his hospital, there was one difficult surgery done by him, he was so tired, and he wants to rest, when he reached to his home, it was near about 10.00 P.M. Aditya, was surgeon, and he was working with good reputed hospital as a surgeon, and also he was counseling to his patient, side by side, his own hospital’s work also was going on, due to pack schedule he wasn’t able to look after the construction of his own hospital. “Is this time, to come at home”? Aditya’s Granny was asking with a little bit angry. “There was major surgery, so it takes time, so I was late”. Aditya told, with a tired face. “Let’s come, have a dinner,” his Granny told to him. “Where is Appa”, had he done his dinner?”, Aditya asked his Granny, with entering his room for getting fresh himself.

Appa, Mr. Anantrao Kulkarni, was the advocate, he took VRS from court, though, due to his health issue, though, he retired from court, he was counseling to the people who needed for their advice, they have a separate officeat home. Again he asked his Granny, about Appa. Now he gets refreshed by himself, he changed his dress, and come to the dining table. “Appa, Your father, he had already, completed his dinner, he is in his room”, Granny was serving him. “Why you were waiting for me, I told many times, don’t wait for me, I will take, my own food,” Aditya told to Granny. Granny doesn’t reply to him, she was just serving him, he understood that there is no meaning to say anything to Granny, he stopped speaking and started his own dinner. “If you are caring for me, then why you are not marrying? Now you settled down, how much time Anagha will wait for you?”. Granny asked Aditya. Again he was polite and just finished whatever in his plate. After completion of his dinner, he went to his room, he opened his mobile, since evening he wasn’t checked his mobile, 15 missed calls from Anagha, he called to Anagha, but her mobile was switch off, not it was near about 11.30 P.M.

Anagha, was also Doctor, she was Gynecologist, and she was working also in a reputed hospital. Soon, Aditya and Anagha were going to marry, she was also asking every time to Aditya about their marriage, but he was saying that after starting of his hospital they would marry. Anagha was also ready for his condition.

Once when he came from the hospital, he went to his own library, in his room, there were many books in his own library, behind the shelf, he found an envelope, a brown color envelop. He took in his hand, there was an address: - “Anandashram”, Tal.and Dist. Beed. He was knowing that, this is the letter which came from her mother………………….

“Do you want to go there? if you feel that, you can go and meet her.” Aditya’s father told him, when Aditya shown the letter to his father, after reading a letter, his father replied to him.

After 15 years the letter came to his home, after 15 years……………. Why? Why she is remembering us, Why she wrote, that, please come and meet me, my daughter is needed for your help, she has a medical problem…………… Had she married with another person? What is this Anadashram? in-between period there wasn’t any contacts from her side…………. Why now?........................ many questions like these, were coming in his mind, he was totally confused about how to reply and whether he should go or not there? It was a big dilemma for him.

“It is your own decision, Aditya,” Anagha replied when he talked about the letter. “After all, she is your mother, she having right on you, it is not fixed whether she married or not, you just go and meet her, then your all doubts would be cleared”. Anagha talked with very softly with him, because she was knowing that, it is really double-minded situation for Aditya, and proper advice is needed to him, if there is any wrong decision was taken by him, it would be problematic to him and his relations with his mother.

Granny was very angry on Aditya’s mother, “Don’t go, now we have no any relations with her, why she wants to bridge a gap of this long period, listen to me Aditya, don’t go, and also don’t listen to your father if he had that braveness on that time, this wasn't a situation”, Granny replied very rudely on that letter. The same night, when Aditya was in balcony, his father came to him, put their shoulder on his hand, and said very politely, “Look, Aditya, the past is there, everyone having their own past, but if we just holding our past, we can’t move to our future, your mother was having some dreams, about an orphan children, she wants to work for them, but she wasn’t able to do from this home, Anaandashram, was built by her father, now there is no point in discussion in that, why she did this? why she left you when you had a need for her love and affection? Forget all the things go and meet her?” Aditya was just looking to his father, how he politely explained the things and made very easy all situation, and he decided to go Anadashram, he went against his Granny, she was refusing to him, but he didn’t listen to anything.

Anadshram, was in Beed, though the address was only Beed, but it was very far from, actual Dist. Beed, he asked to an auto driver, he told that, it is not near, it is very far, from here, it will take more than 1 hour, but in whole Beed, Anadashram, is very famous, for an orphan children, he told that Aditya had to pay 150/- for the same, he agreed and he moved to Anadashram, main city left, and the village road came, it was very small road, after 1 hour he reached to Anadasharm. Aditya gave 200/- Rs. To that auto driver, the letter was still in his hand.

He welcomed by the persons who were living in Anadashram, it was not only an orphan, but it was also having a little school for orphan children, the school was up to 7th standard. “I want to Mrs. Aarti Anantrao Kulkarni, I am Aditya Anantrao Kulkarni, the son of Anantrao and Aarti Kulkarni” Aditya talked with them. Bhaurao and his wife, Sunita was looking at everything in Anadashram, they told that, let come inside, have fresh, eat some food, rest and then we would talk.

Aditya obeyed all the things which told by Bhaurao and Sunita, he got fleshed, he had breakfast, then he had rest, at evening when the prayer was going, he woke up, and he came outside from his room, Sunita offered tea to him, he had tea, he asked about school, he took a round of the school, he saw to Bhaurao, the caught to him and asked about his mother.

“Oh my god!, how it would possible, no I can’t imagine,” Aditya was speaking with crying, the tears was coming from his eyes. Bhaurao told him that, the madam wrote the letter, to him in December, and he was asking about the posting of the letter to Aditya, but Aarti madam was refusing to him, for the same, Aarti madam died in January, and he posted the letter after her death, Aditya came to Anadshram in March.

“Aarti madam was suffering from throat cancer, Dr. Banrjee from Mumbai was giving treatment to her, and she was going to Mumbai, often for the same, but the things weren’t possible, Dr. Banarjee tried a lot of but, he can’t save her…………….. Aditya asked about that girl, Bahurao said that, that girl died after Aarti madam’s death, she was suffering from some infection problem, for her madam wants to you be here.

Aditya was totally, wordless, what he was thinking about her mother, now he was feeling very guilty about his feeling, he went in his mother’s office, he sat on the char, he opened the drover, he found some papers about her treatment, and the some family photos, a very old photos, in which he, his father, his mother, and his Granny, a complete family photo, but never be completed………………

When he saw her diary, and when he read the diary, all these things were mentioned, and she apologized for those things which she did, for these an orphan children, she also wrote to Aditya, that, she would know, Aditya would come here one day, and he will understand the reality, and again she apologized to whole family members.

The day came when Aditya wants to go back to his home, a very sad mind he went out from Anadashram, he met to Bhaurao, and Sunita, and gave thanks to them, he tried to give some money, but both were refused and told that, they are getting money from government, madam tried very much for getting grant from government, and Dr. Banarjee was helping to her for the same, but Aditya wasn’t listen, he said that, this money would be in the remembrance of her mother, then both can’t say anything, they accepted the amount, he met to that orphan children and promised that once in year or in 6 months he would be there for these an orphan children, and would continue this legacy of her mother, at least he would be tried for the same.

Aditya came on station, he sat on the bench, there was some time to train, he took all her hand written of his mother, he sat very politely, and he was apologizing to her mother, and the tear was coming from his eyes, train arrived in station, he sat on his seat, train started, and his journey started towards his busy life, but lots many remembrance of his mother, and great work of her for an orphan children…………….