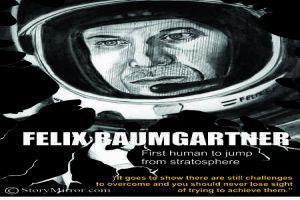 Felix Baumgartner, Popularly known as Fearless Felix has created history by successfully landing on Earth after jumping from the stratosphere. It was swashbuckling daredevil leap of almost a 39-Km and engraved as the world’s first ever supersonic skydive.

According to information, it took about 10 minutes for Baumgartner to reach the earth’s surface (the eastern New Mexico desert). Baumgartner’s capsule was as high as 128,097 feet (almost 39 km) from earth’s surface. His capsule was elevated to the height in a helium-filled, 55-storied-high balloon. The mission was called “Red Bull Stratos.” Reports also tell that the preparation for the same was being done for the past 4 years.

Felix Baumgartner was born in Salzburg, Austria, on the 20th of April, 1969. Skydiving was his passion and he would often dream of flying helicopters. Felix was also deeply motivated by astronauts as and when he saw them on Television. When he was only 16, he attempted foer his first skydive. This was the begening to achieving several awards and breaking several world records. He sharpened his skydiving skills by joining the Austrian military Special Forces demonstration team. Later he became a professional skydiver. There were many hurdles in between because of the financial constrains and he had to even to repair motorcycles so as to sustain himself and his passion.

Felix Baumgartner is a proud holder of several records. For example- He is the first lowest BASE jumper as well as highest BASE jumper(from Rio de Janeiro’s Christ the Redeemer statue and from Petronas Towers in Kuala Lumpur and Taipei 101 tower respectively).

In Felix Baumgartner words: “ It goes to show there are still challenges to overcome and you should never lose sight of trying to achieve them.”