My Faith Is My Strength

My Faith Is My Strength

Everything which was indifferent was fun for us in childhood. It was the age in which the mind was always forcing to enjoy every moment. The same was used to be done.

As we were living in a remote village, we were making most of the toys at our own. It was not so hard for us but when one of our age comes from the city, it was a surprise for him.

It was summer. It was our fixed routine to go into the mountain forests and bring different fruits like black berries, plums, jack-fruits, etc. As usual, all the boys in the colony decided to make catapults. We were busy making our catapults. One of the boy in the colony, with only hand, came. We started laughing at him. But he didn’t react. It was his nature to remain calm. He didn’t like to talk much. So, most of the time, he was keeping himself silent. Though he was handicap, he was able to swim like an expert swimmer, he was able to climb a tree. Whatever we were doing, he was doing almost all things. But we had never seen him playing with a catapult. We were knowing the fact, but as a child, we were not serious about it.

The next morning, we were about to go, he came to join us. Again, everyone started laughing at him at once, this time more loudly. We were telling him that everyone had his own catapult so he would not do anything. His coming with us was meaningless. But the boy did not lose his temper. He was firm to come. He was determined. Finally, he was allowed to come with us.

We were climbing enjoying, laughing, teasing each other and observing the plants, trees, birds and butterflies, insects and so many things. Every day it was looking new for us. The boy was ahead of us.

We came to a place where we drank sweet water of a stream. We had some cucumbers taken from the farms. As soon as we were about to move further, suddenly, we heard a loud chirping of the birds. It was coming from a huge banyan tree. As we reached there, we saw a snake crawling on and on. We were shivered with fear. We tried to divert its attention but in vain. It was about to reach the nest in which nestlings were resting. We had seen many times a snake eating rats but it was the first time to see it climbing a tree.

We picked our catapults and started aiming at the snake. Everyone among us was missing the aims. The boy came forward. He forcefully snatched the catapult from my hand. This time, we were not in the mood to laugh at him, but shocked seeing him so serious. I was wondered. We all were watching him. He asked me to put a marble into the pad. As it was done, he caught the handle tightly in his single hand, caught the pad with marble in his teeth, took an aim at the snake and released the pad. Unbelievably, he hit the bull's eye. We saw the snake falling on the ground and moving in the bushes. We picked the boy up, started jumping and shouting with joy to celebrate the victory. We decided to return back.

While returning, I asked him, “How did you do it?” He laughed and said,” I have full faith in me. I do everything with faith. My faith is my strength.” The boy had defeated us. We had no words to say anything. We felt ashamed on every underestimating him. Since that day, we didn’t dare to laugh at him but he had become a respectable one.

Friends, this is the thing. You must have faith in yourself then you will find everything is possible. 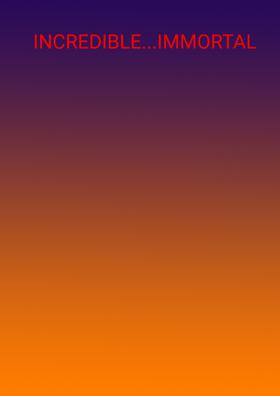