Daughters are equally important as Sons

Daughters are equally important as Sons

Mr. Rajeshwar Singh was a wealthy businessman. He had a huge business empire set up by his father in 1967. He has three children in total, one daughter, Pratibha Singh, and two sons Rachit and Ankit. He had to get his daughter Pratibha married but she was against it. She wanted to pursue higher education and become a lawyer. Mr. Rajeshwar being old-fashioned and orthodox, had a mindset that there is no need for a girl to pursue education. For him, girls should handle the household so he was against Pratibha's education yet he succumbed to her wishes when threatened by her that she would flee the house and tarnish his reputation. As for his sons, one was a doctor and the other was studying.

One day while he was sitting in the lounge and reading his paper, he got a call from his secretary that his business partner Ranjit have backstabbed him and his business empire have collapsed. All the stocks and finances have been transferred in the name of Ranjit. Hearing this he didn't know what to do? Ranjit was not only his business partner but also his best friend and was more like a family. He couldn't bear the thought of him cheating him and suffered a major heart attack. He was immediately rushed to the hospital. His son, Ankit being a cardiologist performed the open-heart surgery on him. The surgery went on for 13 hours during which he had very weak chances of survival. He survived the attack but now he was on road for he had no money, he was in great debt and his house was being auctioned. His youngest son, Rachit, studying at the University of Oxford, London was totally unaware of the situation. He moved in with his son Ankit. Pratibha had completed her studies and had started practicing. At that time Pratibha being a lawyer stepped in and helped her father. Ankit too helped him in every possible way. She studied the case very minutely and started her own investigation. She sent money to her younger brother in London.

She was shocked by what she learnt. Ranjit was no friend. He was a businessman in great debt and just played friends all along so that his son could marry her. But Pratibha being adamant about her studies refused to marry anyone. At that time he devised a plan to ruin him. He made Mr. Rajeshwar sign papers of debt and empire by gaining his trust. He forged the papers and asked Mr. Rajeshwar to sign the papers of his property. She learnt that her father was not the first person to be tricked by him, she traced down the businessmen duped by him and pusuaded them to become eyewitness. She presented her case with full confidence and won it. Ranjit was shocked as his cover was blown away. He was immediately arrested and put behind the bars. She just didn't expose Ranjit and his son but also saved their bunglow. Mr. Rajeshwar at that time realised that daughters are equally important as sons.

Daughters are the pillars of society. To build a successful society one has to educate their daughters. Don't clip their wings, let them fly. Watch them as they fly and conquer the world. 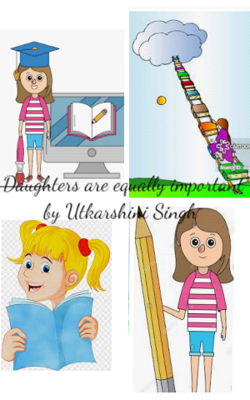