It was 5:30 in the evening, and she was on her way home. Rima’s birthday awaited, and her favourite cousin wouldn’t want her to get late.

As her escalator came up to the Huda City Centre metro platform, however, her thoughts came to a halt. There he was!

She’d been seeing him for the past three days. He was a tall, lanky man, probably twenty seven-twenty eight; the same age as her. Just like the previous days, he was standing by the same pillar, his back rested on the wall. The eyes below his unkempt long hair were alert, darting everywhere.

It was his expression that had made Sonal curious about him, the day before yesterday. She was used to spotting a few familiar faces everyday. That was natural when you worked at the same place and went home at roughly the same time. But most of those faces were usually exhausted and sweaty, eager to reach home.

Not this guy. He didn’t look tired or spent. He looked watchful, observant. The constantly wandering eyes, the clutching of his fists, the restlessness, everything indicated that he was watching out-for something, or someone.

Sonal’s thoughts were interrupted by the distant sound of the approaching train. Shaking her head, she smiled to herself. ‘I need to get a life of my own.’ She couldn’t deny that the guy looked handsome. Maybe that was why she was paying him so much attention.

As the train shunted inside the platform, all of its coaches blissfully empty, Sonal decided to follow the man. Nowadays, between her 10-5 job and her mom’s constant warnings of her marriage, a little excitement was rare, she mused.

Both of them climbed into the same coach, along with two others; an elderly man and a middle-aged woman. The guy looked at her fleetingly, his eyes searching; she tried to smile, but he looked away too soon. Despite all the empty seats, he preferred to stand in a corner.

Not bothered much, Sonal took the ladies' seat, and plugged in her headphones. With a content sigh, she thanked heavens for her office in Gurgaon; at least she got a seat in the metro. The thought of getting in at Rajiv Chawk always made her shudder.

Outside, the day had almost faded, and the city was full of lights. As they crossed MG Road station, Sonal looked at the malls longingly. It had been so long since she’d had a nice shopping trip…she hardly got time these days…

Slowly, their coach was filling up. All the seats were now taken. The hanging handles were now being occupied one by one. Sonal enjoyed this gradual filling up-it was a real experience seeing the train both empty and bustling full.

Sonal looked beside her. The train had just left Chhattarpur. An old lady was looking pleadingly at her.

‘Oh, sure, aunty. Please, sit down.’ Sonal got up. People around her gawked. They couldn’t believe someone could give their comfortable seat to a stranger. Sonal felt amused.

Slowly, deliberately, she approached the guy and stood beside him. He looked, his eyebrows crunched up, but didn’t say anything.

‘The next station is Qutab Minar,’ announced the computerized voice. ‘Doors will open on the left side.’

Sonal bent down to have a look at Qutab Minar through the window. Though she looked at it everyday, the ancient relic didn’t cease to amaze her; standing with all its history and glory, in between a radically modern city, whispering tales of a slave who became the king of India. It was quite dark outside, but she could make out the silhouette of the tall structure from the glow of nearby buildings.

As the train lurched to a start, Sonal lost her footing and stumbled onto the guy.

‘Excuse me!’ He retorted severely. ‘What’s up with you?’

Sonal looked at him, abashed. ‘I’m sorry. Lost my balance.’

‘Well, stand up straight, or go somewhere else.’

Sonal was surprised by his brusque reaction. From up close, she could see sweat beads forming in his forehead even inside the AC. As she looked, he smacked his lips with his tongue.

The guy smiled with contempt. ‘Work? Yeah, you may say so.’

‘Well, I am sure I know how it is. I myself work in Siemens…’

The guy laughed, a drawn out, insulting pun. ‘Oh, my work is far more important than yours. You are just, what, a receptionist?’

‘An engineer, if you must know.’ Sonal felt affronted. Who was he to judge her work?

Sonal didn’t reply. Pursing her lips, she looked away. Just another pompous brat.

However, she couldn’t hold on much longer. ‘So, what do you do, Mr. I-do-far-more-important-stuff-than-you?’

The guy smiled again. He wasn’t looking as tense anymore. Rather, a sheepish arrogance glinted in his face. ‘You wouldn’t wanna know.’

‘Won’t I?’ Sonal’s voice was stinging. ‘Why? You in some top secret service?’

The guy looked thoughtful for a while, then he said, ‘Ok, tell me. Here you see so many people. Do you ever wonder if everyone of them deserves to live?’

Sonal thought she’d misheard. ‘Deserve to what?‘ ‘Live.‘The guy said, stressing the word. ‘Life is the greatest gift given to anybody, isn’t it?’

‘I suppose..what has that got to do with your work?’ Said Sonal doubtfully. He was getting weirder and weirder.

‘Humor me for a while. So, life is the greatest gift. And yet what do these people choose to do with it? They grow up, they grow selfish, they add no value to the society, they produce many losers like themselves, and then they die. These losers then do the same. It’s a vicious cycle."

"That’s a little harsh," Sonal said, alarmed. ‘Most of these people are hard-working service persons. In their own ways, they are serving.’

‘But are they willing to?’ The man said, his voice intent. ‘Do they really want to do what they do? And whatever they do, is that something special? Are they talented enough to do something only they can do, nobody else?’

‘Exactly! Why do you think unemployment is at its peak right now? Why do you think we have these trains bustling with people? Because living isn’t taxable, anybody can live without doing anything.’

‘Well, that’s why Government is concentrating on regulating the population now…’

‘What regulation? We are so well past that! Regulating now won’t do anything! Can you believe, ours is a country with the second largest population in the world? And it’s going to be the first within five years!"

'Well…’ Sonal didn’t know what to say. The Delhi metro was the last place for an intellectual discussion.

‘You know what they should do? They should implement a rule. A rule that says, if you can’t do anything worthwhile, you don’t deserve to live. Because then you are just a waste of space, a waste of resources. For breathing, you’ve got to pay!’ He was now shaking, his eyes wide and angry.

‘Next station: AIIMS. The platform is on the right side.’ Announced the voice.

‘AIIMS!’ He laughed, a bitter, loud laugh. A few people looked at them, annoyed. ‘You know, this is where I’d brought my brother when he…when he…’

‘Don't touch me!’ The guy pulled away from her. ‘You know, my brother was in IIT Delhi; a remarkable student. He’d topped IIT-JEE. But then, then he faced an accident…and…’

He took two deep breaths, calming down a little.

‘When we brought him to the hospital, another patient had also been brought in. They took him in first because he looked more injured. My brother had suffered internal damage, so there wasn’t much blood..so they just assumed..."

'I'm so sorry,’ Sonal said, handing him her water bottle. He took a large gulp.

‘Yeah,’ he said. ‘I was sorry too. Sorry that I couldn’t save him. But also sorry to live in a world which didn’t value its better citizens. That other person, you know what he was? A clerk! But he lived, he survives even today. Tell me, does he deserve to live more than my brother? Tell me!’

Sonal was lost for words. She just looked at him, her mouth open.

‘Next station: Rajiv Chowk. The platform is on the left side.’

The train, now overcrowded, entered Rajiv Chowk, as thousands of people rushed towards it in the platform.

'You know, it’s too late to change the system,’ said the guy. He wasn’t leaning to the wall anymore; he stood straight, his eyes on fire. ‘What we need is to wipe the board clean, and rewrite the story all over again. ‘

Sonal looked at him, confused. ‘What do you mean?’

The guy smiled. This time his smile was apologetic. ‘To each his fate.’

The hand in his pocket found the tiny switch. A finger pressed hard into it. A tiny contact reset inside his backpack.

In the next moment, the huge blast that blew out inside Rajiv Chowk metro station showed the inevitable destruction to which our world is mindlessly running today. 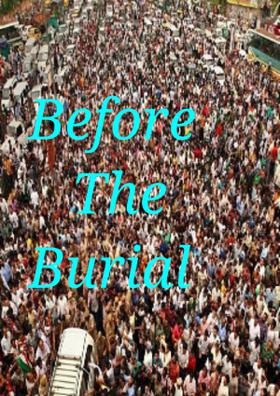