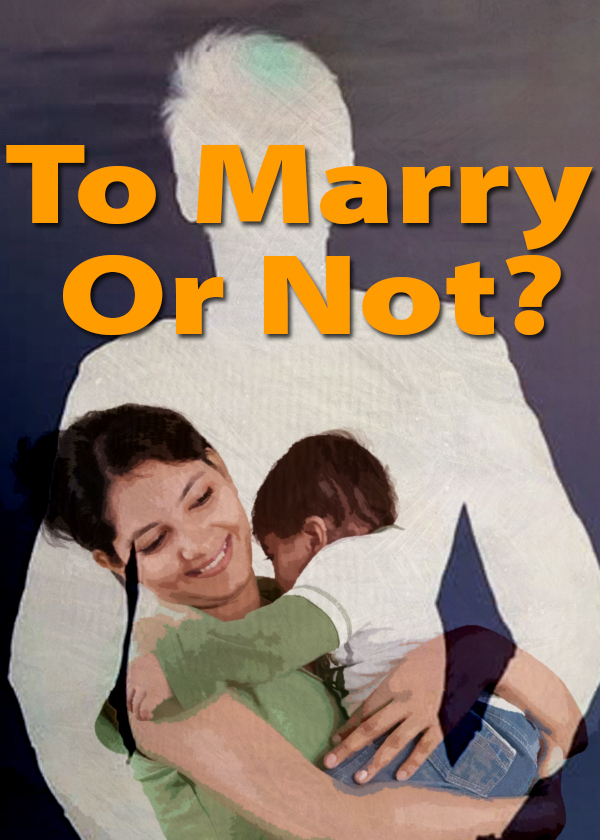 To Marry Or Not?

To Marry Or Not?

Pratiksha was a single mother since three years. At the age of 28, she was shouldering the responsibility of her high profile corporate job and her child, Ayush. She had married at 20 and had become a mother at 25. Now, however, she was a widow at 28. Everyday existence for her was to fight her way through life and the numerous questions that people put to her. Whenever she went to Ayush's school, doubts were expressed on her ability to bring up Ayush and in the retail store, the common question asked was, "Where is the father/husband?". To this she would say, can't a woman live without a man?

Her question was valid but not correct in the Indian context. In India, a woman living alone and bringing up a child was frowned upon. She was advised either to get married again or go back to her father's house, where she would get the support of her parents. The same thing happened with Pratiksha. However, she did not lose hope. At one of her visits to the supermarket, one of her schoolmates whom she had not been in touch with for years said on hearing her plight, "Poor you, may god bless you". She also suggested that Pratiksha should get her kundali checked by a pandit if there was any dosh in it.

Answering the world was not that difficult after a certain period of her husband passing away. Pratiksha learnt to fight alone and was a proud mother to her son. For Ayush, she was his supermom. But, being a father and mother at the same time takes a lot of courage. As a single mother, Pratiksha had to ensure that she loved him like a mother and became his inspiration like a father. Among all this, she had to face her child's difficult questions like "How did my father die in an accident?" "Why did it happen to him only?" "All my friends have their fathers, why can't I have a dad now?".

Yes, Pratiksha was strong, independent and proficient. But, sometimes she too used to break down hearing her son's innocent questions. Juggling long working hours and the responsibility of her child with no shoulder to lean on at the end of the day, took away most of her waking time. She had grown emotionally weak in the absence of male support. Still she gathered courage every morning to fight life. At this time, her boss Prashanth asked her: "Will you marry me?" Prashanth was a good friend of Pratiksha's and he was also her team leader. They worked in the same renowned company for two years.

Prashanth's words always gave her strength. He would say, "Come on! Cheer up lady, you are strong like a lioness. You have come off strong in all the situations of your life and you will be an excellent mother to your son, Ayush. Prashant had begun meeting Pratiksha more often for lunch or dinner. They had been good friends for the last six years. They had met in the company where both of them worked together. He had been recruited at the position of team leader directly, without any hassles. Pratiksha was the customer service agent.

Prashanth's words gave Pratiksha strength as he guided her through her tenure. He always accompanied them to the park and the children's play zone on Sundays. Prashanth was very sensitive and fun loving at the same time. Ayush therefore enjoyed his company a lot. Whenever they made a plan for an outing with Prashanth, Ayush got very excited. One day Ayush asked Pratiksha, "Can I call Prashanth Uncle, Papa?" Pratiksha was shocked and she had no answer to his question. Her eyes welled up and she made him understand the situation and told him that they were just friends.

Prashanth and Pratiksha had been very good friends for two years. One night, while Pratiksha was doing her home chores, there was a knock on the door and Prashanth came in. He asked Pratiksha whether he could come in. By entering through the door, he also wanted to enter into their lives. He asked Pratiksha whether she would agree to marry him. To this, initially, Pratiksha had no answer. But, Prashanth's mother needed an answer. Her son always kept on talking about a strong Pratiksha and her single motherhood. She also wanted to ask her whether she would marry Prashanth.

To this, Pratiksha had no answer. She and Prashanth were just good friends. This is what she had maintained all her life, until Prashanth asked her the question. When he did, she began to ponder on the question. However, it was a very big decision for her to take. She had to think about Ayush and take the decision. She saw that Ayush was comfortable with Prashanth and even she had grown to like his company. However, marriage was a different ball game. She could not decide whether to marry him or remain friends with him. It was true that he was a great sense of support, however, marriage was something different. She could not decide whether TO MARRY OR NOT?