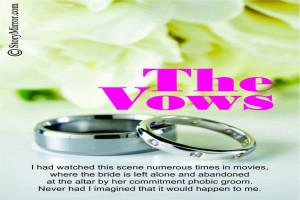 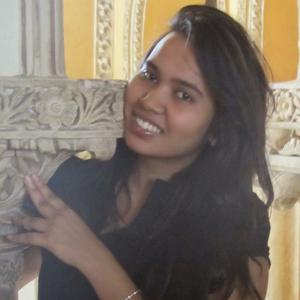 I looked at my watch, it was 10.05; he was already late by 20 minutes. With every passing second my heart pounded faster. Oh, I was already beginning to regret this. One look at my parents and I knew that they had the same amount of tension that I had, yet they didn’t let it show. My mother gave me a reassuring smile and continued talking to my father. I presumed she too wanted to distract herself from the ongoing situation. I held the pleats of my sari and walked down the steps, I chose a spot which was shady and sat down. The heels I wore were killing my feet, such a bad decision, I thought in hindsight.

'Why do we get to know that our decision was bad later on?', I missed to myself. Why can’t it be like the movies where every fateful incident is marked by a different tune or a song?

Looking at my worried face, my sister came to me, she put her hand on my shoulder and tried to pacify me by saying that I was getting worked up for no reason. She explained to me that just because he got late, it didn’t mean that he wouldn’t turn up. She narrated a few funny incidents of our childhood to lighten the situation but I was in no mood to laugh, I just wanted to be left alone.

I looked at my phone; I had already called him five times and messaged him thrice. I locked the screen of my phone and looked at my reflection. Here I was, dressed in a simple yet traditional white and red sari with my shoulder length hair left open, kohl rimmed eyes, a hint of lipstick with a little bindi on my forehead and a pair of jhumkas. Much against my mother’s wishes I had chosen to go simple. Initially, I had planned to give the sari a toss but had to concede after her emotional blackmail, after all it was my wedding!

I had watched this scene numerous times in movies, where the bride is left alone and abandoned at the altar by her commitment phobic groom. Never had I imagined that it would happen to me. It was 10.30 now, I was losing patience drastically and fear crept in my mind. I was the quintessential girl left at the altar now, sitting on the steps of the court with our wedding rings and garlands. The only thing left that could make this look like a movie scene would be rain and a sad song in the background. Each time the bride cried in such a situation in one of those movies, I would call her a sissy, expect her to bring her life back on track, be single and fabulous, fall in love with someone more deserving and try to reassure her that she was better off unmarried. I tried to tell all of this to myself but I failed miserably.

Suddenly it started drizzling; my worst fears had come true. Almost in tears now, I thought of the signs that I had to look for. He was more than happy yesternight and non apprehensive about the wedding. As a matter of fact he suggested we should write our own vows too! I decided that it would be in vain to think of the past, I picked up the last bit of strength I had in me and went to tell my parents that it was all over. Atleast I would be able to salvage the few remnants of my self esteem. Just as I climbed the stairs, I heard his voice; he called out my name aloud. I turned to find him running up the stairs towards me, his parents trailing right behind him. He looked at my face and immediately realized what had gone through my mind. He gave me a hug and whispered in my ears to add 'Will not worry when my husband is late by an hour' vow to my existing list.