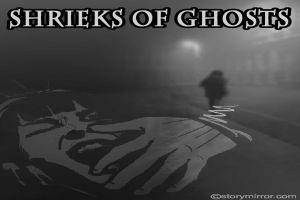 At the witching hour the moon

Then the raging curs and December wind

Keep him awake in the well-lit apartment

At the 10th floor in the Vasant Enclave, a

Where the wealthy and the powerful live;

A shriek is heard that congeals his blood

A loud terrifying shriek travelling up,

A woman calling out desperately:

And loud footsteps are heard and

As if a pack of laughing hyenas is loosed

Upon a prey in the concrete jungle;

The nerd loses his peace and peers out

Into the brightly-lit alley outside the wall of

The gated community, well-secured and patrolled;

He finds no human figure out there!

But the shrieks are heard again-n-again

Rising in a crescendo that shatters the eardrums!

Next morning his hosts tell the geek an urban legend

Years ago a young working woman got murdered

After being raped by few thugs high on drugs;

The folks in the neighbourhood did nothing to

Help her, the poor object of combined male lust;

Since then, on dark nights, her ghost stalks the

On each door that was once closed for pleading her!

People to sell their flats to strangers but

The lonesome shrieks followed them

To their new homes everywhere.

Although rapes/murders have not stopped even after that

Gruesome episode of urban indifference, and,

The gleaming city of the flyovers and high-rises has turned into a graveyard of unburied and the revengeful female ghosts, demanding justice.

Why this ongoing nightmare? he asks.

Well, some can see such stalking ghosts but the governments cannot!