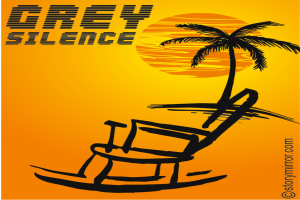 It rocked with a peculiar squeaky sound and he just wouldn't let it stop. It appeared as if the old wooden stool would speak up any moment now. "Stop rocking the hell out of me!! What is wrong with you?"

He continued to search for his much desired obscurity, sitting there, with his hair unkempt, eyes red with lack of sleep and weariness dripping from his face.

Shail had not moved a muscle for past two days. For some reason unknown to me, you and his beloved parakeet, Anna, he had just been sitting and staring out of the huge glass window for the past 48 hrs, as if he were in trance.

The glass window was what made him fall in love with that house, a massive bungalow overlooking the beach. Shail had always loved nature; he drank the beauty of the scenic view day in and day out, never getting tired of the red ball being gulped by the vast ocean.

Shail hadn’t always been such a jerk. He might have been the only person living in that house with Anna - the parakeet, Margret - the baby tortoise and Shylock - the German Shepherd, but he was a happy man, at least until then.

After two days of deadly silence, the house was alive again. Shail moved, he went to his modular kitchen and prepared some tea. He wasn't exactly the world's greatest cook but managed to feed himself and his family of 3.

As he consumed the tea, he leaned back & closed his eyes; they hurt, tiny pearls of salty water began to escape his eyes & fell on his pure white cotton Kurta.

He often dressed simply. Deceptive as his looks were, even though he looked like a journalist, he was no where close to being one. He owned an art gallery; the city's finest and most talked about Venetia Art Gallery.

It was just another day; Shail was looking after his client's exhibition when the phone rang. He picked it up and with a very warm accent greeted the caller, "Hello! This is Shail, how may I help you?"

Those were the only words he had spoken in the last 72 hrs. Julie, his assistant at the gallery asked him what the matter was, but he just wouldn't speak, not a single word.

`Ting-tong!' `Ting-tong' the doorbell rang for the fifth time since yesterday, but he moved now. It was the postman. He had this cream envelope in his hand addressed to Shail.

He opened it and without reading and kept it on the table. He knew what it said. Perhaps, the phone call and the letter were linked.

But what was it that had made our chirpy old bachelor go insane?

We are very pleased to inform you that Venetia Art Gallery has been nominated for the National Modern Art Museum. It would be kind of you to accept the offer and complete the legalities on or before 8 pm, 19th November.”

Wasn't this supposed to be a reason to be happy? To celebrate?

Shail had always wanted such recognition in his field and now when the clock was ticking and it was just 2 hrs to the deadline, he was rocking in his chair and sipping tea.

Shail didn't move; the cup rested on the letter, the clock ticked and it was 7.30 pm. The phone rang again. This time he held the receiver and smiled; Mahua was out of danger now.

Mahua was his nanny and had to be put on a life support system. Her lungs were giving up on her. At the age of 64, she had little chance but Shail wanted to leave no stone unturned. Mahua was like a mother to him, perhaps even more. He had mortgaged his gallery to pay for her treatment and was glad to know she was recovering. A few years added to his nanny's life gave him much more peace than the letter on the table.

But during those two days when none of it was sure for him, he looked for no shoulder and no support but obscurity and silence.

Sometimes life's hardest decisions become easier when silence is your only companion.