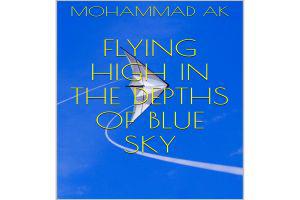 Eyes toward the sky & efforts directed on small fingers

The kite is flying high in the sky.

With a flick of finger on to its right & left the small boy is giving directions to its colorful kite.

Two more fellow’s of same age has also joined him.

Having exciting expression on their faces, their eyes are directed towards blue sky.

Instantly excitness level reached to its peak when they saw another kite with black & red contrast headed toward there kite’s direction.

Battle of kite’s with Crossing of chemical pasted threads was a sight to watch.

Twisting & twirling of kite’s made an impressive battle to watch.

Instantly the small boy lost his grip on the kite (kite’s thread broke away) and the kite was heading towards south direction with strong wind.

The kite was drowning in depths of crystal clear blue sky.

Expression’s of defeat & worry was hanging on faces of all the three boys but they didn’t lose hope.

They have decided to fly another kite.

They are once again ready with a new kite & new hope’s to give a hard battle to victorious kite & once again flourish, rise & fly high in the depths of blue sky.

Flying High In The Depths Of Blue Sky