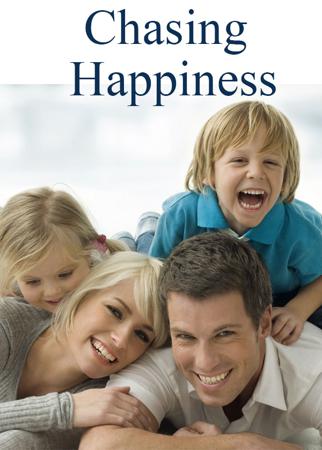 ﻿I think that happiness and trying to be happy are same sides of a coin. I have seen people having different opinions around this such an elusive thing called happiness that makes me wonder that is there anything in this world that can make anyone completely happy? I guess not, for I have seen people keep on running throughout their after this mirage and get disillusioned at the fag end of their lives. I am saying this because I have seen and heard people never ever being satisfied with the small things, rather they want more: for example parents are not happy with their children getting good grades in school, they want them to get the highest grades or die trying, or people not satisfied with their jobs, salaries etc. and they want more. Similarly, I have seen people not satisfied with their marital lives, houses, assets, status, prestige etc. It is as if they would like to keep on accumulating things perpetually in a huge urn or a water tank until it overflows with what they think is enough. But what they don’t realize is that huge urn or giant tank will burst someday and everything will spill over and they won’t have anything to show for it. I also wonder that do these people ever stop and think that at what cost did they achieve all this and for what?

I think not because people have running after this not from today but since our evolution into modern human beings. During those days people used to be happy with more food, water, and land, then came the period where people started to acquire wealth and power to attain happiness. Now it is a combination of all things, that is wealth, power, fame, success etc. and still they want more of everything to be ultimately happy.

Anyways I was going somewhere few days ago when I saw something which completely changed my perception about this concept of ultimate and true happiness and I believe will at least start others thinking like the way I do now after reading this.

Few months ago I had to go to Lajpat Nagar for some work and after finishing as I was returning from there, I saw something which has forced me to believe otherwise.

As I was in my auto and we stopped at a traffic light, which turned out to be clogged with traffic jam which was unusual for a week day and the pace of the was also very slow. So we trudged on along with traffic with the driver of my auto constantly using foul language against the whole situation we were in.

I was on the other getting very impatient and frustrated also at the same situation when suddenly as I turned my head towards the right, I saw a sight which I will remember as a quiet new eye opening experience for me. I saw a family staying under the fly-over whose condition was something that is usually we don’t like to talk about.

The family consisted of the father, mother and a small boy. The father was a tall guy but had a complexion of someone who had seen the life of struggle and impoverishment, but something about him gave me the impression that he understood this and carried it with grace. The woman on the other hand as if she did not care for the world except for her family. Both of the parents were wearing dirty, torn clothes and somehow managed to cover themselves however they could. The young boy was maybe 3-4 years old, but he was wearing comparatively better clothes than his parents. This told volumes about the parents, i.e. that they may live somehow but they want to provide for the best for their child, which any parent would do. I could guess that someone had a change of heart and must have given this dress to the little boy. The man was handing out packets of incense sticks and other assorted items to the woman to sell them to the vehicles at the traffic stop

Meanwhile I was watching all this with much more seriousness as I had nothing else to do but to wait for the signal to clear. The woman seemed to be in a hurry and a bit distracted towards the child as he was playing in the dust with a street dog which was also very dirty. But the boy seemed oblivious to all this commotion on the street, all the honking and the heat. He was happy playing with his friend as if he was going to be his lifelong companion.

While all of this was going on, the woman suddenly shrieked loudly which abruptly all of motorists to turn their heads towards her. We saw that the boy had unknowingly come out into the street playing with the dog. Both the parents had rushed to grab the boy from the road as soon as they saw it and we were also a bit concerned for the boy’s safety. As the mother whopped down and grabbed the boy, she took him to the safe spot under the fly-over and over there as she put him back on the ground, she slapped him tightly.

The sound of the slap seemed so loud amidst the traffic that despite the slow moment of the cars, people looked out of their car windows. It naturally was a surprise to all of us, because generally we tend to comfort our child and soothe him after any such kind of situation, but here we witnessed the exact opposite of what is the general tendency.

Even the boy was surprised and jolted by the sudden violence and he looked at his mother for a couple of seconds and then started crying loudly. Seeing all this my heart went out for the child but I could not interfere in their personal matter and moreover, the auto driver also sensing my feelings advised me against it as he also said the same thing. The father meanwhile shouted on the mother to have been too harsh on the boy and he went up to the boy and picked him in his arms and started to make him feel better by laughing, making faces at him etc. The father even picked up a broken toy lying on the ground and tried to distract his son from crying so incessantly.

After a few minutes, I saw the mother’s features softening a bit and she scrambled to take the son from his father’s laps onto hers. Then she started cooing softly into the boy’s ears and I was stunned to see that the boy immediately stopped crying and started looking at his mother who was also trying to make him laugh. After a few unsuccessful attempts, the boy finally started giggling and started laughing along with his parents. Everything returned to normal in a few minutes much to my relief. I even saw that some of the other vehicle drivers who were watching the whole incident also were kind of relieved and they started shutting their car windows.

Then after a few minutes surprisingly, by some miracle the traffic signal cleared and we managed to move ahead much smoothly than before.

I know many of us will tend to forget this whole incident, but it led me to think that all of us move in big shiny cars, have cushy jobs, tend to flaunt our wealth and strive to gain prestige and increase our social status by constantly running around in circles. This small family is happy with whatever little it has and however little it can provide for their son and themselves, but they are still happy with their lot. I mean, they also can have dreams, aspirations and desires but they know that they cannot get everything, so they content themselves with whatever they have and pray that the next day may bring them better luck and health.

I also can guess that majority of the people will think that what is there to even contemplate? They will start arguing in a loud voice that this family has nothing compared to them and they were meant to be like that only. Which I think is utterly wrong and nonsense since everyone in this world has an equal opportunity to live, earn, become rich, dream and aspire.

This particular experience has hence taught me and led me to believe that life has to be lived fully; and running after a mirage does not make your life any way better. It has taught me one thing which I will take with me till the end and that is ‘Live life by your terms and be contented and thank the Lord for the opportunity given to you.’

Lastly I would like to say this that maybe happiness is merely an illusion; or it is like an oyster with pearls. You just have to find your Oyster.