Like any other day, I was strolling through the market with my bag in hand, wondering who bought the lilies across the street. Ramu kaka used to import lilies every morning and I had no idea who bought them.

Tanya was waiting for me at the corner of the street, we had planned to visit the market together. The pan shops were busy and men were lighting their cigarettes as we walked past them without making eye contact. My mom used to warn me about disturbing the animals on the street.

We entered the market and immediately headed toward the medical shop. It was quite busy inside, the shopkeeper meant business.

"Beta, what do you want?" he asked in his heavy voice.

"Do you have sanitary pads?" I asked. The crowd hushed around us. My curiosity piqued, something wasn’t right.

"Whisper." the shopkeeper narrowed his eyes at me and commanded. I felt his harsh stare.

"Uncle, some respect would be appreciated." The crowd felt shattered, the women around us smiled and I could feel my feminazi rise. No, I am not a very volatile person and have accepted the terms of our life.

I was born in Uttar Pradesh and had accepted a few things about my state that was uncommon in other parts of the country. U.P. has the highest rates of crime in the entire country, which is something that we shouldn’t be very proud of. Even though I loved being home, I knew that my actions outside of the house were daily scrutinized. My dad was the coolest human I had ever met and he was the only one who didn’t insist that I get married. We used to drink in each other's company, watch Netflix together, and put those cushions on our heads. My mom was worried about my safety outside of the house. It was as if she was waiting for someone to hurt me. The people where we lived were a mix of dangerous and unpredictable and they followed old traditions and values, which is why I wasn’t surprised that my loud request for a pack of sanitary napkins was met with a warning.

My thoughts faded as the bomb was wrapped with a newspaper and double packed in a black polythene bag. Yes, it was a packet of sanitary napkins that the society didn’t want to see.

It was what every girl who lives in a small town goes through. Why? Why do we have to hide something that is used for our hygiene?

On 15th August the Prime Minister had addressed the issue of sanitary napkins, but I still didn’t understand the taboo surrounding them. Why can't men accept that sanitary pads are a health requirement and something that women use every month?

When children ask their mothers about sanitary napkins, they are usually ignored and the topic is changed. Physically, are all men equal? Is menstruation not natural? My dad never believed that pads are something that should be hidden. He asked me how I felt after I experienced my first period and was always there whenever I needed to talk to someone about my health. Unfortunately, there are very few men like him.

As soon as I reached home, I felt excitement in the air.

"We are going to Coimbatore!” my sister screamed. I was excited about the trip, but I knew that Dad would never agree to go. I had been waiting for the trip for a long time but dad was busy with work. On the veranda, we were dancing and planning what places we would be visiting in Coimbatore. Natural beauty was a treat for my eyes and I couldn't wait for the trip.

Days later, after the trip was finalized, Mom began packing. Like most other Indians, we were trying to stuff all of our clothes in as few suitcases as possible. Our train was scheduled for the next day and after agreeing to go with us, dad had made sure that both of his daughters got a window seat.

Soon, the day arrived, and we hustled to get to our seats inside the train. I peered outside of the train window and sniffed the air. Indian railway stations have always had a unique atmosphere. Loud vendors were running around with crisp samosas and steaming hot tea, people were seen right and left, rushing to get to their seats, and children were buying bags of chips before the train’s departure. I shook my head as I witnessed someone bribing the Ticket Collector for last-minute seats from the corner of my eye.

As soon as my family settled down and dad locked our luggage beneath the seats, the engine started, and a loud horn was heard. As the train left the station behind, I saw the vendors stop selling their snacks and moving away from the train, while late passengers were running to catch the train. My parents, like many other parents, made sure that their family arrived at the station an hour before the scheduled departure, and I was thankful that I wasn’t one of the late passengers

While I was enjoying the ride, my mom was busy counting the number of pads she had packed. I hated that my period was going to accompany me on the journey. My dad brought bananas and a hot water bag to help us go through the monthly pain. I left the thought of my menstrual cycle behind and focused on enjoying the journey. As the sun was setting, I admired the beautiful colors of the sky. I knew that the next sunrise would bring a new day.

Dinnertime came and plastic plates were brought out. Mom took out the food that she had prepared for the journey and I experienced difficulty eating. The most annoying part of using a plastic plate is that it is lightweight and the wind easily jostles it. After dinner, my mother asked my sister and me to grab the blankets and sleep. I knew that sleeping would be uncomfortable, the seats were shaking with every movement the train was making. But, my mom was a blessing in the journey. She hugged me and soon we dozed off to sleep. It was rattling throughout and I woke up with something hitting on our luggage. Three masked men stood there with guns and ammunition. I was petrified and a squeak almost came out from my mouth. There was shouting and chaos in the compartment. Yes! The trip I loved was being hijacked by these goons. They opened fire and everyone fell on their knees, a man was shot because of the chaos. Soon a bullet whizzed on one of our bags and mom was shocked, it contained our napkins and sanitary stuff. My dad covered us and soon they asked all women to leave for the next carriage. A gun pointed to me and he erupted, “Not her, you remain here."My mom started shouting with all the voice she had. Was I frightened? Yes! I was the only girl in the whole compartment and terrorists were roaming around me. My dad asked me to sleep and gave his pillows to hold on. He caressed my head while enchanting the bhajans that he knew. The bhajans that could save us.

It's been an hour and my stomach started aching, the pain was unbearable to hide. I started groaning as dad reached out for hot water that he had preserved for me. The masked man saw it and snatched away from him. “No luxuries, sit down!" "It's my daughter, she has periods! Be human at least! No, they were not humans. He emptied the vessel and threw the water. The pain was growing by each moment; they weren't allowing me to move. Something that was not in my control was bleeding. I bled and the pillow showed the marks. Dad started shouting at them that she needs new clothes. If not the bullet, the infection will kill me. The men that were in the compartment hustled around me and got in an argument with. "She is a girl, you're going to torture her like this", he questioned. To take this opportunity few men grabbed their weapons and captured them. The whole compartment was locked so that their other men can't reach out. An elderly man came today and said, "Bitiya doesn't need to worry, we are there." But the problem was that I didn't have napkins, my pain faded but the night wasn't, there was only a frock for me.

"We will make a sanitary napkin as help will arrive at the next station", the next station was only 110 km away but I was soaked in blood. Even if I wore a new cloth, there wasn't any claim that I won't get infected.

One man stood and announced to collect all the pillows that everyone had, he had a well-packed polyester cloth. Another man went to arrange for any kind of sanitizer that was available in the compartment. It was like teamwork. The cotton was beaten to form a thin layer and the only thing that I could see that they were working to make a pad. Another man took the nylon and sanitized it to give it a shape. The cotton soon welded into a lightweight soaking cloth with a layer of nylon and polyester layer covering both sides. My dad was in disbelief with everything happening around him. The napkin was sewed from both sides and two heavy round builders that were luggage were used to compress it. But one part was missing and that was adhesives. A light rope was used to hold it in one place. Every part was heavily sanitized and with full precaution while some men were teaching their son about menstruation. The pad was ready and I tied it, while I changed my clothes. Was it the change that I was questioning throughout my life?

Soon, the station arrived, the police captured the rest of the goons and we were given medical treatment. My mom was scared. But I was smiling. Who were these men in that compartment? How did they coexist with the same society where buying pads were smirked? Why didn't they give me a black bag? Was this the 1% of good men that mom talked about?

Soon, I came back and one-day mom asked me to go and buy some sanitary napkins. The same shop was visible with the same man.

"Do you have napkins"

"No newspaper or polythene?”, I asked.

"No, just respect that is free", he smiled.

I bit my lips and walked away. 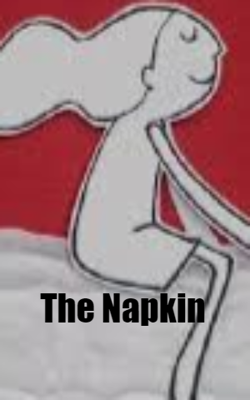