You will the creator of someone of your ownself gave me an immense and fantastic feeling! I felt the same when I missed my period after two years of marriage where things were not going good as it was a sudden proposed, on the spot love marriage "When North met South!"

Being the 3rd son's daughter in law and two elderly sisters weren't married. It was decided by my in-laws that we should not rear children until elderly sisters get marry. Then later on foster mother of my husband called and told us that people are keeping names to your wife as she cant conceive. "Why don't you take her to some good gynaecologist and get her uterus clean?" May be something would be wrong with her. Get all test done as soon as possible. Then my hubby became vehement. So I calmly asked my foster mother inlaw ,"What is the procedure to bear a child ? "She felt awkward to answer infront of her foster son and told Premjit, "What type of question are you asking me infront of your husband ?" Do you have any shame? Then I told her that when you would answer this then I would be in a better position to answer your question. Later she said shyly "mating" I told exactly mumma this has not happened between us since these two years then how would you think that you would become granny and we as parents. In these two years we understood each other as we two stangers married and then came to know about our likes and dislikes and both the families somehow accepted our marriage without wholeheartedly.

Later aftet few months I became pregnant. How lavishly my nine months of pregnancy went with lots of care given not only by my Sunil and mother but people around me! I declared my pregnancy news after 2 months to my inlaws as doctor asked to wait until it was reconfirmed and to the rest after completing second trimesters as my placenta was weak no travelling longer distance and no bike ride, lots of walking , doing domestic chores all the trimsters, doing all sorts of work with joy and checking weekly basis the growth and development of my foetus. My mother and office colleagues used to bring different food to me so that I enjoy my pregnancy to the fullest. Worn different maternity gowns to flaunt my baby bump and be comfortable at workplace. Enjoyef different cuisine with Sunil, friends colleague and mommies foods which I used to missed after my marriage.

Lots of planning was done and lots of leave were saved as every year I earned them but that year I told my HR that I would use them along with my maternity leave ie 90+30days + 30 days 2 years LTA leave. Doctor asked me to go for sonography and other tests which was done again my mommy came along with my niece and Sunil. Everything was ok only the weight of my baby was 700 grams instead of 1000gms so he told you have to take utmost care. Sunil was pissed off that whatever food and junks you relished where it went then doctor explained him very well and said he would monitor and take more care from now. Then he said you are a special patient of my friend ie I would show you some actions of the baby. And you wont believe he asked sunil to get a coconut water and asked me to drink while drinking he showed the every movement of the baby the face, tiny hands legs, chest ,lips, fingers , bumping inside, drinking coconut water. I felt jubilance and excited for the day to arrive where instead of black and white I would see in my arms. My niece was delighted to see massi's baby and was shouting out delightedly. We four were elated with the moments.

Baby shower ceremony was something dear to us but at the same time for 6 months I would be away from my beloved husband was worrying me the detachment. But we were just one building away. First time I dressed traditionally like a South Indian bride with flowers and Mehendi to celebrate to- be mom to welcome our to be child. Doctor told me that my child height is more than normal child so we would go C-section. I was scared but was ready to bear any pain for my baby. 9 months and 9 days went but there was no sign of labour pain. Many test were done to check the stress of the child and I had crossed my due date. Dr. Naik, our family doctor and Dr. Venkat, my gynaecologist were there for me like Gods.

Then on 5th Nov, 2008 there was no movement of the baby and my inlaws were asking if normal deliver can be with second opinion then I went for second opinion.That lady doctor made me wait for hours as she was busy with her work and later on apologised me. That waiting period increased my blood pressure as after taking appointment and as a special case we went there. She examined me and told I can go for normal but it will take time 7-9 hours labour pain and no guarantee of safety. Then I told her I shall talk to my family doctor and come after having something as I didnt had anything since those hours with fear of no movement of my baby. We came home had food then went to my family doctor. He said tomorrow we would go with C section I had spoken to Dr. Venkat as now you wont be operated since your BP is too high. The moment my hubby heard this and he spoke to my inlaws they told tomorrow is not good day ie Thursday instead go for Friday. I was already brimming with my excruciating pain since whole day then I burst tears and started weeping as loudly as possible. Doctor asked me to control otherwise complication may take place at last moment and your entire nine months pregnancy would go in vain. Even my mommy told Sunil you took lots of care of my daughter and the to be child. Last moment you made her cry like hell. Only give me in writing that this delay should not affect my daughter's life. He was stuck up between his mother and mother in law. Doctor advised me to take BP medicine and go to beach to calm down my BP , my mood and I should feel completely relaxed and calm then only they would operate me tomorrow. We both went to beach and he clicked my snap as I was unable to control my tears and my throat was choked with the scene happened at home. I was just praying deep inside "Waheguru" I have faith in you and I know you wont let me down.

Next day on 6th Nov 2008 at 7 am we went to hospital. My baby's stress test was done and it was noted that he was feeling stressed and congested in the womb and immediately I was taken to operation room neither my mother nor Sunil were ready as both are too emotional and weak to be present with me in the operation theatre .so I told them that I would go alone but deep inside I too had fear feeling for both of us.But never showed my fear to them and went boldly saying then bye. Doctor told me Premjit have this BP medicine before we start with anaesthesia and other procedures. I told doctor that my body reverse the blood while injecting in my veins. Doctor shouted her and then started the procedure but I told doctor I'm feeling suffocation and unable to breath so the normal oxygen mask was removed and nasal oxygen was given and to give hint for any problem Bp pluck was attached to my index finger. Doctor diverted my mind by asking question before. I told him you are my God now as I have given both the lives in your hands and I know you would do the best. He asked me what do you want , Premjit ? A girl or a boy. I told anything one but alive and healthy one. Then here comes your baby, look at him so tall like your hubby and beautiful like you. I was unable to glance him as my spectacles were given to my mom. I told him " Thank you doctor "and please do handover this healthy baby to my hubby and mommy who were standing out with lots of tension with that ease I fell asleep completing as whole anaesthesia was given to me.

And today my bundle of joy(Khushal) is a healthy ten years boy. Though there was burden of pain and fear going within me but the satisfaction of being a proud mother's child made me more powerful than anything else. And I thank my Waheguru to gift me," the gift of my life ." 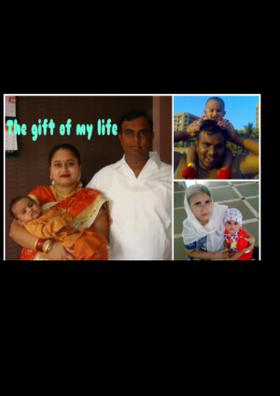