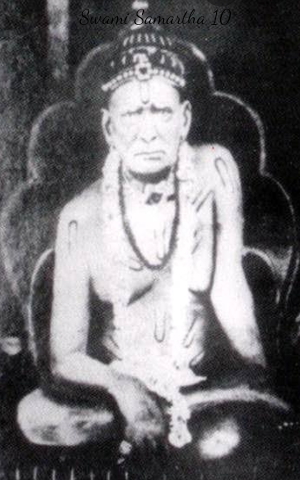 Among all devotees of Swami, Swamisuth was topmost one. Just by hearing his story effect of bad karma goes off.

In Mumbai Haribhawu named one person was living. He was doing a job for his livelihood.

As soon as both of them decided to work together, Afu rate increased in the market and they gained profit.

Haribhawu Gajanan Pandit all 3 went to take darshan of Swami.

After seeing them Swami given them name as Pandit -Ram, Gajanan-Shiv, Haribhawu-Maruti. Swami gave them 3 different mantras.

They asked what to do with 300 rupees we brought with us. Swami said to make Padika(Sandal) and give that to him.

He never gives them to anyone. He used them regularly.

After some days all three taken permission to start to Mumbai.

Haribhawu was not able to focus on family life as his total devotion was with Swami.

After somedays, all 3 came to Akkalkot to give silver Paduka to Swami. Swami took it happily. For 14 days swami continuously wore them.

One day Haribhawu came to Swami to take blessing and Swami taken him on his lap and moved his hand on Haribhawu head with love and said you are my son will be known as Swamisut.

You leave family life, take this Paduka as my Atmalinga(divine powers) and make a temple for it. Make many people go on the devotional path.

Haribhawu became very happy. His wife opposed a lot. He not listened. She said if u call me to come with u and live Sanayasi life I am not interested. I am very much into Samsara(family life).

After hearing her he has taken her gold also for making a temple and given her white cloths.

He lived as Pujari in Swami math where he worshiped his Paduka.