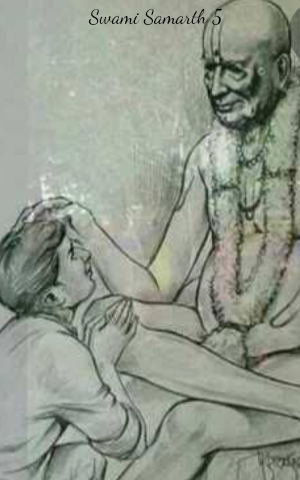 In Mumbai those days Vishnubua very knowledgeable person was famous. Akkalkot king brought him to Akkalkot and started getting Veda’s knowledge.

Vishnubua was very skilled and use to defeat many peoples in a discussion on Veda.

Many days went and one-day Vishnubua came to meet Swami. He asked Swami what is means by brahmapada, how to attain it? Swami started laughing. He thought this is some mad person and he came out. Said to everyone that you got cheated he is a mad person.

That day Vishnubua went home and till late hrs, he was sleeping along with Parashi peoples.

He got a very scary dream that Scorpio in a very large amount came on his body and started biting him. One of that Scorpio hit him with his poison. He was suffering from tremendous pain. He got frightened to death and got up.

Parshi people said to him, many such dreams will come in life it does not matter.

Vishnubua went to meet Swami and asked the meaning of that dream. Swami started laughing.

Swami said you want me to tell you what is Brahmapada, to understand that you should be fearless.

Brahmapada does not come just like that. A lot of hard efforts are needed. When Brahmapada is achieved one will become fearless.

Vishnubua started crying and held Swami’s feet. From that day he became a deep devotee of Swami.