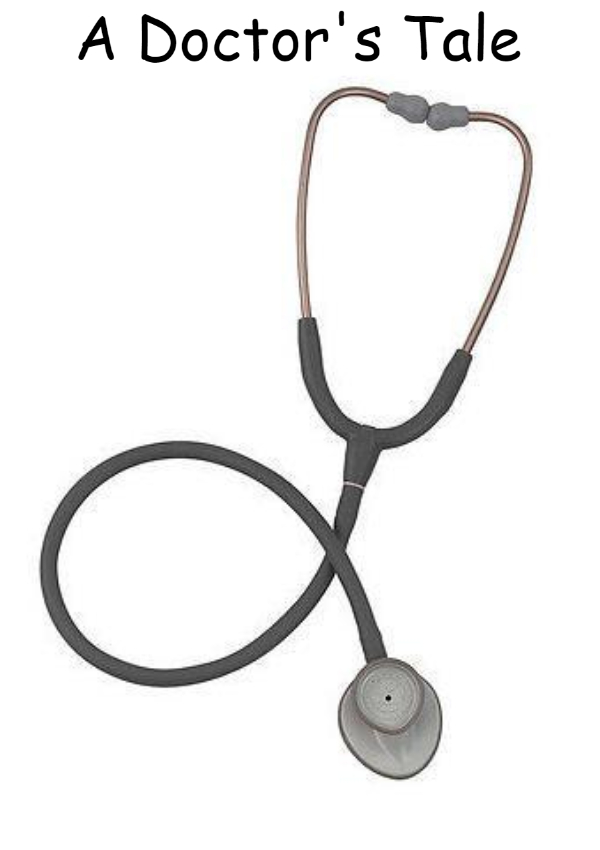 "Next Patient, please come in" - requested the Doctor while still giving last-minute instructions to another patient whom he had just examined.

“Okay, you are good to go now. And, take utmost care of yourself and don’t see me again”–said the over-enthusiastic Doctor.

He has been practicing in this small village for the last fifteen years and was doing reasonably well. He was the first-ever doctor that the village has seen. Regardless of the disease, one might suffer from, a saline injection was a must for all. Soon, he gained a reputation as “Saline Man”.

Contrary to his profession, he is a chatty man, who would spend a considerable amount of time in gossip with his patient than diagnosing the illness. Many times people would visit him to discuss their problems other than health-related. The widespread perception of him, having solutions for all the problems, made him popular among people. His nameplate reads-

As soon as the next patient entered his cabin, he almost jumped out of his chair.

It was his childhood friend, who paid him a courtesy visit along with his ten-year-old daughter. Both the friends immediately became chatty and were talking about all the good, bad, and goofy things they did in the past. As they were still engrossed into their old good days, the girl, who was a little puzzled and unaware of what they were talking about, asked him –

“Uncle, I will also become a doctor like you and treat people who fall sick. How did you become a Doctor?” asked the little girl.

Not expecting this, he was taken aback for fraction of a second, as if she has asked about his secret.

“Great choice, kid. I am happy about this but mind you, have to work hard, study a lot and miss so many beautiful things in life because of your study and practice“-said the doctor, who also felt a sense of pride for himself. Saying this, he pushed himself back to his chair, took a deep breath, held it for a second and

“too much struggle, my kid, too much...”- He traveled to the past to revisit the journey of him becoming a Doctor.

Some fifteen years back

"Next patient, please come in-"

Doctor: “what is your problem? tell me?”

Patient: “Sir, I have been suffering from cough, chest pain, and fever for the last few days. Unable to eat properly. And, I can barely walk.” -replied the patient having a pale face, weak, and extremely fragile body.

The doctor diagnosed him, checked his vital observation, examined his oral cavity, eyes and

“Ok, we need to take your blood sample and then, will perform some test and post examining the reports, I will start the treatment. Be brave”-consoled the doctor.

Blood and X-ray report confirmed that he had TB, considered a deadly disease, and needed to be admitted for one month. His day would start with routine check-up by a nurse. She would administer his medications and change saline etc. and also provide him updates about his treatment. The nurse would repeat the same to other patients. He was astonished by this mechanical and monotonous routine which, nurse and doctor followed every day. How a few doses of these tiny tablets makes a patient feel better, would actually perplex him so much.

He started inquiring about the medicines, their doses, reactions, and timing.

He would ask– “Why are you giving me this two times or why small tablet but not a big one?”

Whenever nurse asks about his interests, he would say, “this is for my understanding, so I can take them on time and in a correct manner, once I get released from the hospital.”

He started maintaining notes of each detail, which he observed. He had not only written the names of all the tablets which he himself consumed as a treatment but also which he overheard or other patients were taking for treatment. He was very cautious in his approach. He categorized all the symptoms related to certain diseases and medicines which doctors prescribed to treat them. This routine went on until one day the Doctor came to see him.

“Now, you are okay and fit to go home. Take medicines for just fifteen more days.” A smiling doctor informed him.

He was relieved, folded his hands to show his gratitude to the doctors and nurses, and started collecting his belongings and left the hospital. He reached home. People welcomed him back. He, himself was feeling great, as if he had not only recovered fully from a deadly disease but also found something precious. For the next fifteen days, he read all those notes which he maintained during hospitalization countless times. He frequently recalled the procedure of his own treatment.

He finished his last dose. Now, he was hale and hearty.

And one fine morning, he woke up early than his body would like. He finished his daily routines and headed straight to the nearby market, rented out a shop and collected shop’s board from a painter which he had ordered a few days back and put upon his shop, which reads-

Then, a TB patient. Now, a Doctor. This is how his journey from a TB patient to an MBBS doctor started, albeit in an illegal way.