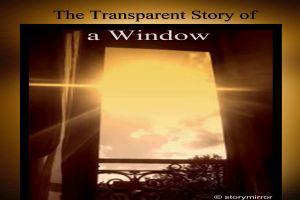 The Transparent Story Of A Window
★★★★★

I was always such a believer; I have always been myself- All clear and transparent;

I reflected upon everyone equally and gave them the sight to look through my eyes;

Then why was I deceived?

Why was I made to believe that they admired my frame?

While I was beautiful to none. None of them looked 'at' me... they all looked 'through' me.

I have always been an introvert. I opened up only when someone really wanted me to and 'they' tried.

Some even shut me down and then looked upon my bars and felt like prisoners. They shed tears in dismal.

Forgetting all the negligence 'I' ever went through, I still comforted them by being there, always.

I never went out, never left. But I'm so sorry; I also could never come in.

The girl I was staying with, I think she noticed me. I felt a lot better with her.

She dressed me in fine shades of mustard and white, and maybe a few dashes of brown.

I actually hated these colours!

But I still liked her.

We talked too, but only on chilly winter afternoons or maybe nights as well.

She wrote on me, sometimes drew too. That’s how she told me the name of the boy she loved.

I dissolved it into myself.

She even invited him to meet me once. They both stood there looking 'at' me!

And I had never seen the sun doing such beautiful things ever before to windows,

His eyes! I had seen brown turning into gold that day.

I wondered if that’s how beautiful I too looked when dressed in brown, if this is the reason she too liked brown.

One night she fought with him. But then cleared her mind in the morning while she cleared the dirt on me.

We had a lot in common and I finally felt home.

But happy days come to an end; she got married and walked away.

It gave me hope. Hope that one day even I'll get to be with that fancy French window on the other side of the fence.

I know he stares at me!

But, I just hoped it happened soon for I couldn’t even look at him then.

The man, who moved in next, blinded me with thick dark sheets. He didn’t like light much. He is kind of a loner.

But what was worse was that he thought he was the only one alone. He thought the room is empty. He thought no one wanted to be around him.

If I could have just got that blindness off me, I would have liked to ask him for a cup of coffee.

Didn’t seem he really liked being with me, he planned to shift.

He took off the black sheet off me and instead of throwing it away folded and kept it safe.

It’s for sure that some other poor window somewhere was about to suffer the same fate as mine.

Next came a family. A family of four. I liked them. The house was filled with noises and laughter.

But now, I'm getting old. My vision is blurred. The weather gets trapped in my cracks. My frame is getting old too, the brown is chipping off! I never wanted it to. That’s the only memory I have of her.

The French window across the fence still looks young and I've stopped looking at it.

And then one day, I see my frame was uprooted and replaced by a freshly painted, new, antique one, golden in shade. I didn’t mind. The brown had to turn golden after-all.

My bars were cut down and a new glass, a new vision took over.

I was young again, and beautiful and deprived.

Deprived of my only right of aging.

But I have seen every climate, and more than that accepted it all.

For I'm not just a window,

I'm a snapshot of sunshine.

The Transparent Story Of A Window