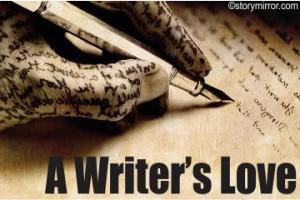 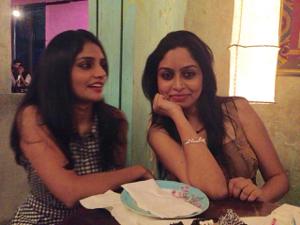 'You can never die,' she said as she pulled out a knife from the kitchen cabinet. The eavesdropping leaves of the mango tree leaning in through the kitchen window fluttered awkwardly. Talks of death always had that effect in this household.

He pretended to be too busy cleaning the bookshelf. She walked up to him, ruffled his hair and said 'When a writer loves you, you can never die.'

That was nine years back. Today while ambling through the cobbled streets of Florence, Ankush walked into one of those nerd havens, a cafe called La Cite where bookworms crawled in and crawled out. He hesitated. People had occupied all the seats. A pretty girl helpfully gestured to a vacant corner seat but he shook his head politely and pointed to a book kept on the table of that corner seat. She spoke in halting English with just a touch of an Italian lilt that sounded delicious to his ears. Like the vapours of cappuccino which always comforted him more than the drink itself. He preferred fleeting things - coffee vapours and random girls in cafes he would never meet again.

He walked up to her and said, 'Sorry, I could not hear you from where I was standing, I think that seat is occupied - someone has kept his book there.’ She smiled and said, 'Seat not occupied. Book-crossing.’

He asked, 'Book-crossing?' She said, ‘It is the practice of leaving one's book at a public place to be picked up by the next traveler, who in turn leaves behind his book to be read by someone else.’ He noticed she did not invite him to sit with her. Reluctantly, he dragged his feet away from this beauty and plonked down heavily at the corner seat. He ignored the book on the table that cost him such charming feminine company. However, while waiting for his coffee to arrive, he noticed that the occupants at La Cite were either reading books or peering into their laptops. Ah well, a disgruntled him found nothing better than to pick up the book. When he did, his heart skipped a beat. He opened it hastily. He sucked in his breath. Panic-stricken, he started flipping through all the pages and in a rush turned to the last page to read the last paragraph. He knew this author’s style; the soul of the story always lay in the last paragraph. He turned the book over. Suddenly his heart was hammering away at the ribcage. With a shaking hand, he picked the book closer and read the 'About Me' section of the author. He felt deflated; the book did not mention much about the author. At least not, what he was looking for.

‘May I sit here?’ he looked up through his foggy spectacles. Through the haze of moist eyes, he saw it was the same pretty girl. He mumbled about getting late, got up shakily, opened his briefcase and took out a dog-earned book to replace the one he knew he had to take with him. That evening he skipped a visit to the Uffizi gallery and went straight to his hotel room. Noon had melted into a cerulean dusk but time had stood on tiptoe for one man that day.

With each page that he turned, it chipped away at his heart. It felt as though she was sitting in front of him and pleading him not to break up. Those beautifully expressive kohl-rimmed eyes looking at him beseechingly. Only, he had slammed the door on her face and she had never gotten a chance to tell him what was needed to be told. He mulled over the irony. After the breakup, they were still living in the same city but it took a trip to Florence to discover the truth. Nine long years. Nine years ago, there could have been a reconciliation if only he would have given her a chance to explain herself. He had gone about it clinically, deleting her from every contact list and refusing to meet her to talk out the misunderstandings. He felt the faster he got it over with, the better it was for both of them. He felt, she deserved someone different; he deserved someone different.

He had been fighting shadows, all those non-existent reasons he brewed in his cauldron of a head to justify why it made sense to leave her. He had tricked his mind to blur out all the happy moments and selectively remember the tiffs. He cajoled his mind to amplify the dour moments to create an alternate reality and that was how he could severe off ties without as much as looking back at her.

She had tried to tell him she would never feel for anyone the way she felt about him. He did not believe her. Or rather, it was more convenient not to believe her. But, after all, these years and for all these years, she kept her word. She would not let him die. Ever.

He read the book again, desperately reading in between the sentences. He re-read the happy-ending. Was that a hint? Was she still unmarried? He searched her on the web. Details about her academics and books published so far but hushed silence about her personal life. He wondered how a popular writer like her had managed to keep her personal life under wraps so well. He tried to look for her blog. Her Facebook account. Not traceable.

In some other part of the world, she dipped her pen into the memories of a man and wrote to her heart’s content. Every time a book of hers was published, she felt as if she had tossed a bottle with a scroll in it and imagined it bobbing up and down across the oceans of time and distance waiting to be picked up by him.

Theirs had been a one-year relationship. One! Too short a time for a girlfriend to tell her guy how much she loved him. Too long a time for a writer to experience all those shades of emotions, those non-existent unicorn colours, which only exist in a writer’s head. For a writer, always experienced love in layers of such depth that was unheard of, in his world. Now, he went about collecting the love letters that were due- scattered at bookstores across airport lounges, train stations, online sites, and libraries.

He marveled at finding himself in every book of hers, he had given her just one year of his life and she had turned him into every chapter of every book of hers. The more he read about himself, the more he felt like a tourist taking a tour of a new city and stumbling upon the hidden gems of that alien city. He was caught unawares by who he was. Through her eyes, he was slowly falling in love with himself. In his imperfections, she saw perfection. In his asymmetric rage, she found music. Her writings reminded him of his long-forgotten favourite song, his favourite childhood memory, his first fantasy. He felt like Alladin on a magic carpet flying over pleasant landscapes of his youth. Her words traced the tattoo on his arm, the birthmark on the underside of his left calf, the sealed belly button, that one stray graying hair on that twenty-five-year-old head; she had made famous even his hairy chest. He had never read a hairy chest been described so adoringly and for once, he did not cringe at the mention of the lush flora that ran all over him.

He rang the bell with trepidation; the cloying humid Mumbai air was getting to him. The door blinked back at him listlessly. He could not wait, he had wasted nine years. There was no time to waste anymore.

A little girl with beautiful big eyes opened the door. Those eyes, his heart sank. He asked for her. The little girl ran back into the house. A man strode towards him. He almost felt it was a bad idea to want to visit her. The man asked him who he was. He said ‘a batch-mate’. The man was her brother. He informed him that she had moved out. ‘Moved out where?’ he asked anxiously.

Her brother refused to divulge anything. She had described him so vividly in all her books that he knew the brother would know right away, who he was. He pleaded so hard that the brother relented and opened up about how it had been, living with a chronic depressive that she had turned into. Undiagnosed for years, her condition deteriorated, followed by long stretches of denial that she was coping with a mental illness. It was the elephant in the room. Everyone tiptoed around it but the stigma involved was too profound for anybody in the family to address it. Her mood swings were always neatly brushed under the carpet. Only mad men go to psychiatrists and psychologists, the family decided behind closed doors, on her behalf. With a sinking feeling, Ankush realized how ill-equipped society was, in handling a person suffering from depression. Her brother said they did not realize it was a serious illness and required treatment like any other disease and their dismissive attitude towards it, only made her feel guilty about her condition. Ankush clenched and unclenched his fists inside his trouser pockets, how abandoned she must have felt. First by him and then by her family that understood nothing of the troughs and crests her mental health took her through.

Coughing a bit, a false cough to mask the tremble in the voice, Ankush said to her brother, ‘Is she…?’ The brother said, ‘Her writing saved her. It was cathartic. Her ink bled on her manic days, it was what kept her sane. Her psychiatrist told us to that ensure she continues writing, so we make her write letters to us every day despite her commitments to her publishers. In addition, it helps us know that she is doing fine because she doesn’t inform us about her whereabouts. The minute she stops writing, she will have a relapse and the second relapse is often impossible to come out of.’

On his way back, Ankush took out his phone and logged into his mail account, searching for an email id which had been active nine years ago. He hoped for it to work and wrote to her.

Amidst windmills and tulips, she opened her mailbox and her eyes stung as tears welled up. She paused. Then deleted the mail.

A few months later, he got a call. It was her. She had somehow found his phone number through common friends. Then they met. In front of the same training institute in Pune where they had undergone training together, long back. He had come prepared with a writing contract for her to commit to a ten-year writing assignment, which was to extend further. He would ensure the writing contract was kept renewed with her. He had shut down his IT firm and opened a publishing house.

When she hugged him, he wrapped his arms around her delicately and asked, ‘Why didn’t you reply to my mail?’. She whispered into his ears, ‘I had struck a deal with God. If he sent you back to me, I would give up on writing. Forever’. A chill ran down his spine as Ankush hugged her very tightly.