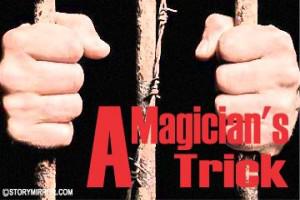 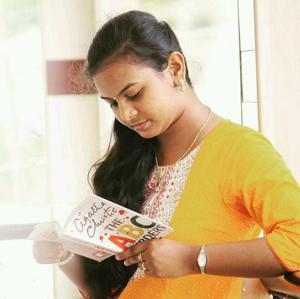 “Shall I have the privilege to meet Mr.Ram Prasad?” asked Keshav Srikar to the prison guard.

“Privilege? He is a criminal. And you are speaking about privilege?” the prison guard counter-interrogated.

“Well, he may be a prisoner to you. But he is my best friend. Hence, I feel privileged to visit him. Please call him soon. I have less visiting time.”

The prison guard tch-ed at him and moved away to call the prisoner. Keshav Srikar, a magician by profession, usually visited his prisoner friend Ram Prasad during the weekends. And every weekend he had to face the wrath of different prison guards. With his noodle-like hair, walnut skin, honey-brown eyes and broad jawline, he could have his way with anyone he liked. But speaking to the prison guards was something he dreaded. He had to tread cautiously with them and lead them to call Ram Prasad. He neither liked to bribe them nor liked to use his powers of hypnotism on them. And he always wore his special hat which made them get distracted easily and give in to his request.

After five minutes, Ram Prasad walked in and stood on the other side of the grill which separated the prisoners from their visitors. His lemon-yellow skin had procured a reddish tone due to the deep guilt which he had been feeling for the accidental murder. His deep-set eyes bore into his best friend’s. His lips struggled to bring out words.

“Keshav, thank you for visiting me once again.” He said, finally.

“Don’t keep repeating that each time I meet you. I am fed up with it. Even if you don’t wish, I will meet you every weekend. Your family may abandon you, but your best friend will not.”

Ram Prasad forced a smile. “Please do keep visiting me. It’s a whiff of fresh air whenever you visit me. I feel radiated by your presence. Anyway, I don’t have any lawyer to back up my case or bail me out. I will stay in the prison till the Government wishes me to.”

“Well, leave all that. I have an important thing to say to you.” The grim look on Keshav’s face told that the matter was indeed vital.

“What is it?” asked Ram Prasad with furrowed eyebrows.

Lowering his voice, Keshav replied in a hushed tone, “I will make you escape from the prison.”

“You? What?” Ram Prasad was flabbergasted.

“Yes, I will make you escape from the prison.” He replied with a wicked grin.

“I have a trick for that. You have to cooperate with me.”

“How can I cooperate with you in your ten minutes of visiting time? And also, the prison guards have roving eyes. They can smell fishy issues easily.”

“Hey, chill! It’s simple. Just take a deep breathe and stare hard into my eyes. The rest I will take care.”

“Is it so simple? I cannot even find a small hole or crevice to escape. How can you make me get away so easily?”

“Just follow my instructions, Ram. Don’t worry about anything.”

“Just stare deep into my eyes.”

Thus began a ‘stare saga’ between the two friends. Though the prison guard was amused by the silence that hung between them, he did not take a step forward to find out what was really happening.

After a few minutes, Keshav broke the stare and announced, “Well, that’s enough for today. We must continue this during my next visit too.”

“Is this some kind of a joke, Keshav?”

“Nah! I wouldn’t play a prank on you, Ram. I think you have already judged me very well.”

“Then what is this? When will you be visiting me next?”

“The day after tomorrow. After another session, you would be a free bird….”

“Hey, you! Go go! Your time is over.” The prison guard chased away Keshav Srikar. Flashing a triumphant look to his best friend, he left the place.

Back in his prison cell, Ram Prasad felt his body undergoing various transformations. Sometimes he felt nauseated while sometimes his mind would travel in a dizzy. Most of the time he was in some kind of trance that he even forgot about the dinner until he received a strong blow from the prison guard.

“Here, take this crystal into your right hand. Quick! Do it before the guard catches us.” The tone of urgency in Keshav’s voice made Ram Prasad to snatch the pristine white Anandalite crystal from him and hold it in his right hand.

“Okay, I will do it. Meanwhile, you keep an eye on the guard.”

“Don’t worry. I have subjected him to a mild hypnosis. Start now!”

Ram Prasad chanted the weird mantra for ten times while gripping the crystal firmly. After a few minutes, he felt giddy.

“I..I feel strange, Keshav. What are you doing to me?” His voice turned shaky.

“A lot is happening with you, Ram. Don’t worry; you’ll be okay. I will come for two more weeks and continue this crystal session. And voila! You’ll find freedom after that.”

Whatever Keshav Srikar spoke was Greek & Latin to Ram Prasad. Yet he continued following his best friend’s words, hoping to be freed sooner or later.

“Hey shoo! Shoo! Go!” Prison guard Ashok Sharma shooed away a wheatish-white mongrel which was prying in the corridor of A Block. 'How did a dog enter the block?' He thought and went on to check the prison cells.

The prisoner in cell no.1 was stitching a scarf for his wife who would soon arrive on a conjugal visit. The second cell prisoner was heavily snoring while cell no. 3 had a prisoner who was drawing on a small notebook. Ashok reached cell no. 4 with anticipation, only to find the cell empty and the occupant missing! What was even more shocking was the intact lock on the cell!

“Sir!” He screamed at the top of his lungs. Inspector General Krishnaraj took to his legs in the direction of the voice.

“What happened, Ashok?” he asked rather calmly.

“Sir! Ram Prasad is missing from his cell!”

“What? Did you check properly?” he moved towards the cell to peep inside. After a thorough investigation with his eyes, he spoke again.

“Yes, he is missing. But this is impossible. The lock is intact. Then how would he have escaped? Let’s break the lock, Ashok.”

A few workers got to work and broke the lock in a few minutes. Krishnaraj entered the cell to investigate it thoroughly. The cell was wiped clean. There were no evidences to show that Ram Prasad had actually escaped. Not even a footprint was visible. The entire cell shined like newly built one.

“This is strange!” He murmured under his breath.

“Sir! How could he have escaped? I checked on him yesterday night too. He looked weak; he was shivering and also he had wrapped himself in a thick quilt. Especially his rear part of the body was covered with the quilt completely while his upper part wasn’t that much covered.”

Krishnaraj listened intently, shook his head and then spoke, “I am not able to make out. Did you find anything strange or amiss when you entered this block in the morning?”

“No, Sir. Everything was in order.”

The burly Inspector General once again inspected the entire cell with his curious eyes. He chewed on his lips in enigma as he thought about the possibilities of escape. But he zeroed upon nothing.

“It’s a jigsaw puzzle, Ashok. Now we must immediately inform the higher officials about it and begin a search operation for him. It’s never too late to start. Come, let’s go!” He ushered Ashok outside and appointed another prison guard to take care of A Block.

As soon as he stepped outside the block, the mongrel which was previously found in the block objected his path. It barked at him ferociously.

“Shoo! Go!” Ashok Sharma once again shooed away the dog, while making a mental note to call the Blue Cross to take away the stray dog.

Krishnaraj informed his higher officials about the missing accused. Soon every source of media was replete with the news of the mysterious disappearance of Ram Prasad. His photos were shared on Facebook, Twitter and WhatsApp to help the police in tracing him. Posters were pasted all along streets, roads and highways.

“Did he have any visitor last week?” Krishnaraj questioned Ashok.

“Yes, he did have one. His name is Keshav Srikar. He is a magician and he claimed to be a best friend of Ram Prasad.”

Soon, Krishnaraj, Ashok and a few other policemen were at Keshav Srikar’s house. The house was no less than a palace. Painted with sandal coloured paint all over and paired with wooden furniture, artwork & wall hangings, the house looked like straight out of folklore. Also, it was decorated with wands, cloaks, crystals and peculiar paintings, which puzzled the policemen. However, they assured themselves that a magician’s house is ought to be like that. Being treated to a glass of water, Krishnaraj began his questioning.

“Of course, I did. Thrice it was. What’s the matter, Sir?” asked Keshav while adjusting his magician hat.

“He is missing, Mr.Keshav. We thought we could question you regarding his disappearance.”

“Missing? You mean he escaped from the prison?”

“Yes. Also, the lock on his prison cell was intact. It is a mystery as to how he might have escaped.”

Keshav Srikar faked a cough to suppress a grin.

“Did Ram Prasad tell you anything unusual? Or did he speak about escaping from the prison?”

“No, Sir, our talks were limited only regarding our well-being and about my magic shows.”

“Okay, does anyone else visit him?”

“No, Sir, I am the lone visitor. His family has completely abandoned him.”

“Yeah! I heard about it. How will a family accept a person who has killed his brother?”

“But it was accidental.”

“Don’t defend your friend, Mr.Keshav. Murder is murder, even if it’s accidental. The dead person cannot be brought back to life.”

“You don’t have to be. Well, since you cannot provide any lead on, we will leave now. We will surely contact you again if any further investigation requires.” Saying so, Krishnaraj flashed a warm smile and stood up along with the others.

Keshav Srikar stared at the retreating party and smiled cunningly. 'They will never find him!' He thought, as he welcomed a wheatish-white mongrel into his home. A mongrel which had escaped from prison cell no. 4 by squeezing itself through the bars. A mongrel which was struggling to get transformed back to Ram Prasad and live a life hiding in Keshav Srikar’s house forever. 'Magic is a saviour,' Keshav thought, as he picked up the mongrel to perform his quintessential magic trick of transformation using yet another crystal.